Today I finally commit fully to a proper early morning visit to the reserve, setting my alarm for 7am, and managing to get out the door by 7.30. The streets are as quiet as the first weeks of lockdown, but otherwise the heat and brightness of these sun-soaked days manage to rob the early hour of any mystique.

The avian metropolis of bushes and small trees near the entrance is, as it was yesterday, alive with activity, a cornucopia of tits and warblers roaming its shopping aisles. The sleepy parakeets — I can’t imagine them being morning people — grunt monosyllabically to one another, and a lone crow flies overhead with a bread roll stuffed in its beak. Yesterday’s woodpecker hurtles back to where it was last time I saw it.

Up at East Warwick a woodpigeon drinks at the waterside, its peachy bill glowing in the sun. Geese splash about in their bath-house and the same sedge warbler as before stands in as the neighbourhood alarm clock. On the island grey fluffball gull chicks blink their eyes and stand, dazed, on the muddy beach. Did any creature ever personify a yawn so well?

Coots set out from the shore as I pass, decorating the still water like a scatterplot in a scientific journal. Their behaviour correlates well with my hypothesis that they don’t like the look of me. Across the water the black-headed gull colony is in a noisy state of wakefulness, much activity, and no direction. A little grebe floats close by the breeding platform and ask itself if the, admitedly, sublime location of the property outweighs the downside of having such terrible birds as neighbours.

Around reservoirs 4 and 5 a pair of terns and an adult and juvenile grey heron take it in turns to hop, skip and jump around my pilgrimage. At one point, both herons are poised with dagger-bills at the ready above an area of green slime — who knows what fish, or other aquatic meal (they will eat frogs, voles, ducklings…) cowers beneath. The white-in-the-sunlight terns flit between them and the sun, draping dappled, dancing shadows over the herons’ snake-like necks. I feel like I’m watching the genesis of a Japanese artwork.

As I walk along the causeway the Thames Water patrol car comes the other way and flushes four lapwings, wurzeling loudly, from the bank… and at last, this early birdwatcher catches a worm. They flutter away on powerful wingbeats, though they look weaker than they are — the wings’ giant, rounded, black hands hang on to what end up looking like a rather weak pair of wrists. 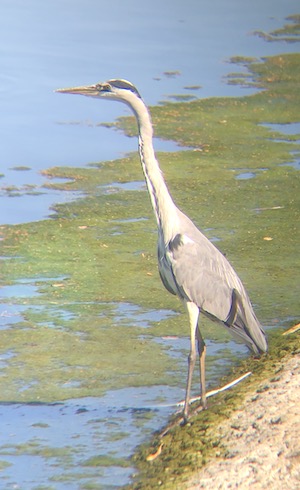 Round the back of the reservoir the young heron — flown in to intercept me — stands pensively. It is all beak and beady eye, and I wonder how it fits enough intelligence to hunt by in that tiny head. It takes off, pumping its legs as a cantilever to its wingbeats while it picks up speed. Further along a great black-backed gull, ever the gentleman pirate, is a quite contrasted image of amoral insouciance, conveying itself with the purose of a man-o-war galleon. You’d half expect it to pull a marine chronometer from its waistcoat pocket.

Nearing the end of my sojourn, I hear an insignificant rambling warble emanating from one of the trackside trees. Stepping closer I see a Wren. Normally so strident voiced, this one is crouched in the shade and intermittently talking to itself, sounding like a hesitant dunnock. After a while a pattern develops — it primarily sings call and response with another, typically exuberant wren in a nearby tree.

I’ve never heard one sing this subdued, apologetic melody before, and I wonder if it might be the barely documented song of a female. I’ve recently read a lot about this phenomena in birds — with the exception of a great many in Europe and North America, both sexes sing in most species the world over, with duets a common pattern. As the female bird song website features a picture of a wren, it seems likely that the females do sing, but finding details of what it sounds like is easier said than done.

But for now it is, at least, a nice theory. [update - it’s a juvenile]

In the last trees before crossing back over the stream I stand watching around twenty long-tailed tits baubling about. A tall man with a stoop, kind sleepy eyes and a greying mustache approaches. “You like looking at the birds, yeah?”. I lower my binoculars and acknowledge him.

I tell him about the lapwings — technically the birdwatching highlight of the morning — but after a little while I realise I misunderstood the intent behind the question; he is a fisherman, not a birdwatcher. I raise my eyes upwards to the green canopy above us.

“And there’s a bunch of long-tailed tits up in the tree,” I say. “And I found an egg.” I show him the speckled, pointed, empty egg I found on the ground, and he guesses it is that of a duck.

“Ah very nice… did you see the pelicans the other day.”

“Do you mean the spoonbills…”

His eyes twinkle — he thinks this is a hilarious joke. In different times, he would be hitting me on the shoulder with disarming overfamiliarity.

“Ah, I am joking. There is no pelicans. But, you know, I am from the Danube delta, where I worked as a guide — a fishing guide — and there we get such pelicans all the time.”

I’ve heard of the Danube delta in Romania. It’s famed as a breeding and wintering ground for wetland birds, both secluded rarities, and spectacles of thousands upon thousands of the commoner sorts.

“Tell me,” he continues, “what is the little one — it is so very little — with his tail it goes like this,” — he mimes a rapid see-sawing with his fingers — “And there is always two of them. There is always two.”

“Does it have yellow on it?”

He nods earnestly as I confirm his suspicions that they are fly eaters, but — like an overgrown five year old — changes the subject quickly when I try to educate him how to identify the different wagtail species.

“The egyptian geese,” he interrupts, taking a step back, “why do they stand like this?” His feet are firmly planted wide apart on the floor, and he looks at me with the imploring eyes of an Italian lover. I tell him I don’t know, but show I appreciate his point by contributing my own little am-dram interpretation of their posture, puffing out my chest and stretching out my neck.

“And they are so aggressive! Why are they so aggressive? I think it is… I always see them with so many little chicks, but then I see them with maybe only one. Where do they go? Who takes them? Bloody foxes! This place is swarming with foxes.”

I tell him that the gulls are another top predator of baby waterfowl. “Gulls” he rejoinders, “ — I hate them!”.

“And what are the cormorants doing here?” he bemoans. “This is not natural. They are seabirds. They should be on the sea.”

I tell him that there are two basic types, and the continental form is more commonly found on inland waterways.

“Pfft,” he protests, “but they eat trout their own size — I see them. I put a wizzal on the island.”

“Yes a wizzal. You know, like this.” He acts out a last mime.

“Yes, wizzel. I will put one on the island, and then no more cormorant. You will see.”

He has been slowly withdrawing from me, but with such rogueish bonhommie I did not even notice. As we part company I playfully tell him I’ll report him for the weaseling.