Lockdown, lockdown, lockdown. It chugs on. Today planned around the roughly weekly shop. Adaptable creatures we are, and I socially distance myself from the same 3 other humans as we each forage up and down the aisles at the same modest pace. My favourite bread is back on the shelves and I pick up a six pack of crisps on the way to the tills. The beeps of the self-checkout trigger a memory and I start huming the theme tune to The Simpsons.

Walking back home down Coppermill Lane I watch a sparrowhawk circling above the rooftops, perfectly balanced around its midrif, stumpy wings arched like acanthus leaves and its long tail cantilevered behind. It wouldn’t look out of place hanging from a mobile.

My last day before returning to work and a slightly stiff back precludes my cycling the distance to the Black Lives Matter protest, I nevertheless decide to make the most of the time by cycling the mile or so to Hackney marsh in search of the little owls that have taken up residency since January. No sign of them today, predictable though their behaviour is. The owl box has vegitation sticking out of its entrance, so nest building appears to be underway.

Not wanting to waste my journey south, I head to the waterworks reserve in search of one of the summer’s less consistent singers. Most warblers that spend their summer in the UK sing consistently all summer. Today I heard the unsurprising singing of chiffchaff, blackcap, whitethroat and reed warbler. it’s rare that a day goes by when I don’t.

But some warblers seem to go quiet as soon as they’ve established a territory and found a mate. Lesser whitethroat, garden warbler and, to a lesser degree, sedge warbler, become verbal recluses from June onwards. It’s particularly notable in lesser whitethroat; I haven’t heard one for a couple of weeks at least, but in April there were at least 8 males holding territories and singing their distinctive jangle, sounding like eggs being beaten with a fork in a metal pan. The waterworks is known for its pair of garden warblers, that year on year return (or send their offspring) to the same bushes in the centre of the reserve.

My twenties are a period relatively devoid of birdwatching. It wasn’t until about the age of 26 that I obtained my own pair of binoculars (a Christmas present), and prior to that I would not have spent any time birdwatching aside from on visits back home to Wales. When I brought them back to London with me, the waterworks reserve was my haunt.

At the time I was living in Bow, close to the canal, and the waterworks was about a fifteen minute cycle, past Victoria Park, Hackney Wick (in those days still an industrial wasteland) and the uncountably many football pitches on Hackney Marshes. The waterworks was, as far as I knew, the only publically accessable nature reserve within cycling distance; it amuses me to think that at the time I considered Walthamstow to be in the same category as the “Here be dragons” sections on ancient maps, when nowadays I think nothing of zooming across 4 boroughs on my bike. 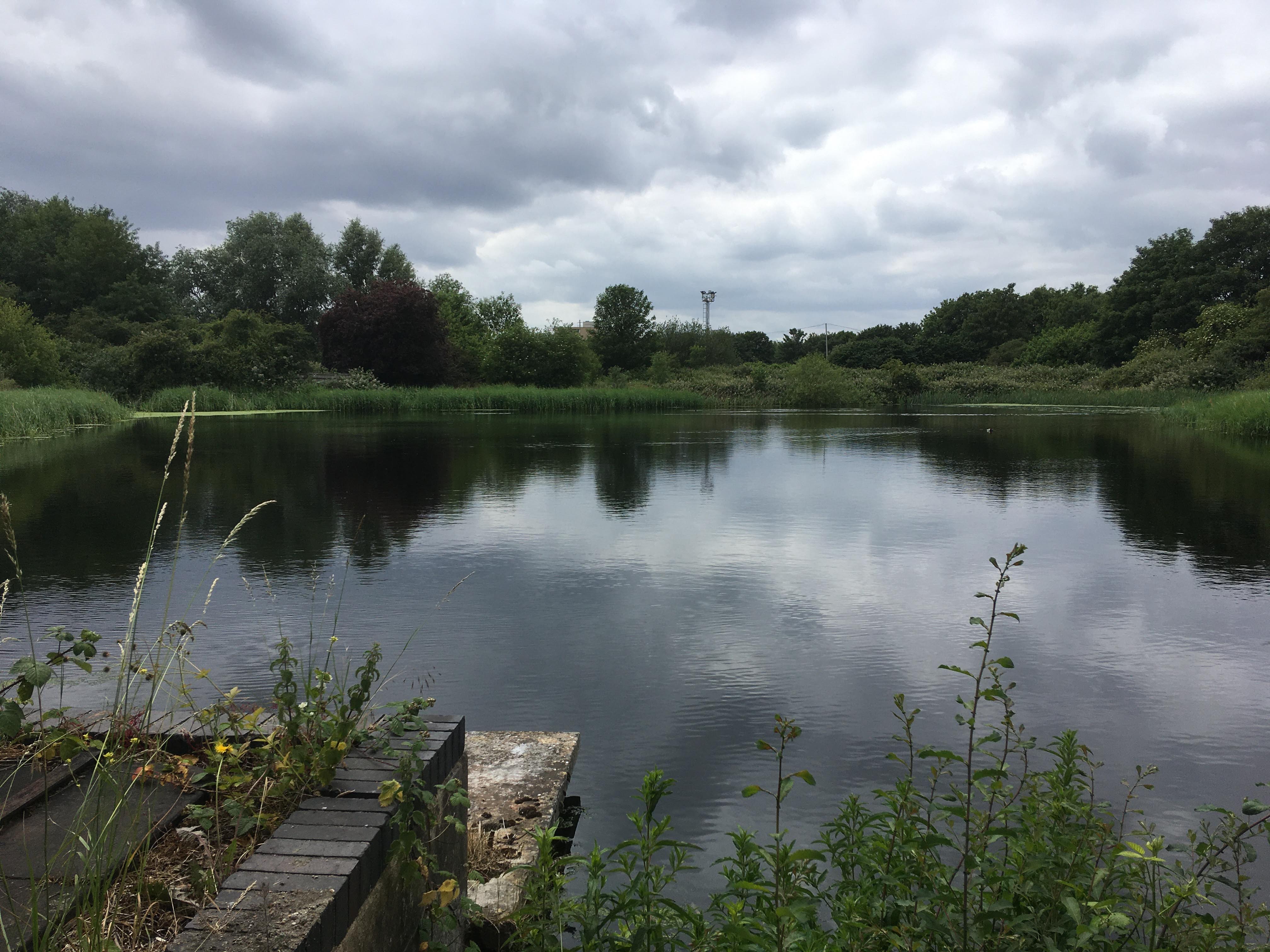 Back then the reserve was also far better maintained. An old water filtration plant, at its centre is the old water pump surrounded by a circular wooden screen with benches and bird hide slats to view the six old filter beds that surround it. Until recently information boards detailed how each bed was maintained in a specific state — from deep water to wet woodland — in order to recreate the typical ecological trajectory a wetland habit travels along. A decade of, one has to presume, underfunding has meant the boards became more of an aspiration than a reality, and they were recently taken down, replaced by one covering the industrial history of the site.

Now three of the beds are largely covered in reedbeds which is not a disaster I guess, but I do miss the wintering green sandpiper, and a dozen or more snipe probing the carefully maintained, more open beds of yesteryear with their stupidly long beaks.

Another loss to the reserve over the same time period is the colony of sand martins. Two concrete cylinders with holes drilled in the side and stuffed full of sandy earth provided homes for many pairs, year after year, but they have fallen somewhat into disrepair, and perhaps the taller vegetation is not to the sand martins’ liking.

They have not completely disappeared though — they breed in man made pipes jutting out of the canal bank in Clapton — and today they claim the only open water left at the reserve as their own. Skimming just above the water, avoiding the brownian meanderings of four cootlets, they beg to be written about, but are overshadowed by the pair of Grey Wagtail that nest right in the centre of the old water pump.

Grey wagtails are a bird I used to think of as being distinctly Welsh. Not that they are unique to wales — no bird is — but they feature on the visitor guides to many typically welsh nature reserves. Those replete with steep sided valleys draped in mossy oak trees through which cascades a crystal clear or peaty brown stream. In the trees — the brochure boasts — can be found wood warbler, pied flycatcher and redstart, and down by the stream the attentive visitor will be rewarded with sights of look for dippers bobbing up and down and grey wagtails feeding on the water-borne insects.

I shouldn’t be surprised, as there are few waterways in London I haven’t seen them next to, but grey wagtails are at least as common in the capital as their far more urbane pied cousin. Today, the welsh tourist board’s loss is my gain as they provide me with half an hour of joy and drama to more than make up for yesterday’s “typical” June doldrums.

Today I’m alerted to their presence, as is usually the case, by their clear piping contact call — the call birds make at irregular intervals just to let their kin know they’re around. “Pwip-pip!”, it goes, a sweet sound that does seem more fitting beside a mountain stream. The male has a similarly bright song, without much discernible tune, like a choir boy attempting a footbal chant.

“Grey” is a strange name for these birds as the immediate impression they give is of yellowness. Not quite as yellow as the yellow wagtail, which almost burn the eyes with the most vivid colour in nature, but still an impressively bright plumage. Both male and female sport bright yellow rumps and undertails; when flying away this always catches the eye. The male also has a neat black chin, bolder in some than others, and a lemon yellow flush to its breast, with the female the same but coloured as though the pens were running low on ink. Both have half realised white eyebrows, sometimes looking furiously bushy in front of their eyes. Aside from that they are a smooth, steel grey, stylish in an understated way, but hardly their defining feature.

If their name can’t do justice to their plumage it should, at the very least, do justice to their shape by capitalising the WAGTAIL. Ridiculously long, they are wagged up and down incessantly on land, and trail behind like a lollipop stick when during their spring-loaded, bounding flight. On landing the tail is often held at a slight upward angle, as though tugging at a sternly held leash.

Immature birds are beginning to emerge from their nests. I’ve seen three in the past week. Their far shorter tails are still wagged up and down with a determined desire to impress the parents. Watching the pair and their child lined up on the steep concrete bank today, the youngster struggling for a foothold on the crumbly, slippery moss, their movements reminded me of a row of lucky waving cat statues in a Chinese takeaway.

Wagtails have two main methods of feeding. They strut about on open ground searching for tiny creepy crawlies but, far more entertaingly, choose a favourite perch and fly on repeated short sortees to catch insects on the wing. They hover and pirhouette in the air like tinkerbell, reaching their fine bills out to take an insect as if casting a spell with their magic wand, then return to catch their breath back on solid ground.

When two amateur historians lean over the balustrade to peer into the chambers of the old water pump — a little too close to the nest for comfort — the adults let out a rapid series of urgent peeps, but this is nothing to the alarm call they reserve for when a grey-brown female sparrowhawk — the same one as this morning? — parachutes in to try its luck. “Swee-eee!” sound their tiny sirens, and the alarms continue while the hawk skulks in the foliage of a nearby birch tree.

I do not see if the young one is safe. It would be a short life indeed. Its legs were still baby pink.

The tiny dramas of life and death that take place around us.

The sand martins all left at once. A stock dove flies in to drink nearby, but no-one feels like pretending things are back to normal. Five little grebes, in a drama that would hit the front page on a quieter news day, brawl over territory in the far corner of the pool.

Hungry, I leave the soap opera and head for home. I hear what sounds like a garden warbler from the usual bushes, but it’s half past three and I haven’t eaten lunch.

I should have brought some crisps.