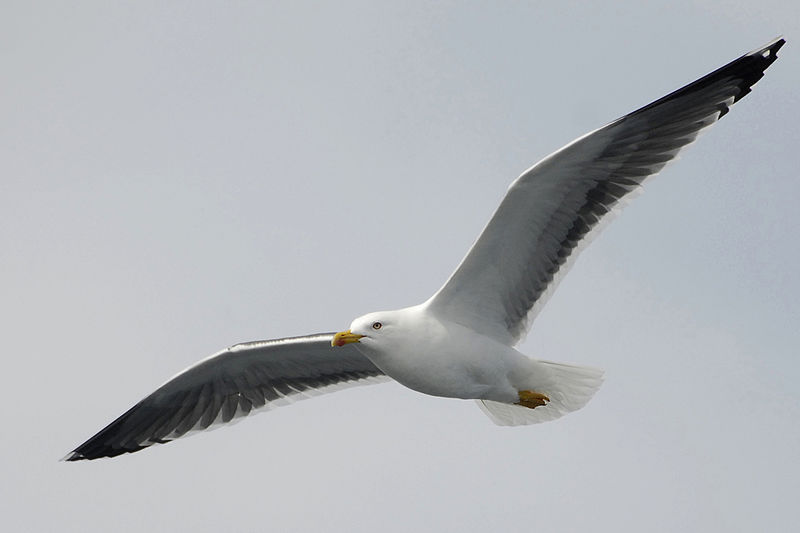 It interrupts its glide and takes a moment to inspect the bare-legged Human with hooded eyes and an unusually pronounced tuft growing from the back of its head. The oblique evening sun draws out the contrast in its colouration. What, at midday, might have looked like a uniform, washed out bluish grey turns out to be an unassuming grey on its upper legs, pale turquoize on its upper body and a faded khaki on its head.

It circles slowly and takes pleasure in noticing the detail from each angle. From the front, one can see some subtlely darker and lighter patterns against the turquoize; astonishingly structured, as if they’d been purposefully designed. The dark patch on its back appears, on closer inspection, to hang quite loosely, only attached by two slim white extensions. Perhaps it is ornamental — it too features some subtlely contrasting patterns — but it can’t be ruled out that is serves some unknown practical purpose.

Unusually for a human, it seems to return the interest that it’s being shown. It lifts its head and, via some quixotic trick of the kind more commonly seen in the segmented, plug-and-play, invertebrates of this world, attaches telescopic eye extensions to its face. Its head gyrates to follow the gull’s flight and they commune sympathetically. The gull greets it with a softly yelped, “How’s it going?”, but after repeating a few times it gives up attempting to communicate — it has one of those voices that always sounds sarcastic, and it isn’t sure how it’s coming across.

It drifts over to stand on one of the metal towers standing alongside the train tracks. From here it can see to the full extent of East and West Warwick reservoirs, including the raft where the black-headed gulls and terns are on their nests — flying too close to there can lead to persecution by their agile dive bombing — and the gull colony over on the main island. Periodically some dozen gulls or so will rise into the air screaming loudly, “Danger… predator… fear…,” but it is rarely anything to worry about. Those first time parents can be highly strung; the gulls that cried “Fox!”.

It is a little older and wiser though. It knows that most things right themselves in the end, and sometimes the best thing to do is to glide away. Over on the island both its chicks, dappled fur balls at this young age, will quite happily potter about the island, and go for tentative swims in the shallow pool that sits in its centre. They have little to fear aside from the infrequent visits from the pair of great black-backed gulls that may be breeding nearby. But the highly-strung nature of the island collective of herring and Lesser black-backed gulls is often enough to fend off any attempts at infanticide.

Sat atop its watch-tower, the gull exudes benevolence. Graphite grey above and the cleanest of whites below, it watches over its domain like a white knight on a metallic steed. A mallard and her six ducklings know to be wary though. Here is the reason the hundreds of goose and duck young born on the reservoirs each year do not result in an exploding population. Some of the gull’s brethren circle slowly down to roost. Bat-winged and piratical against the sky, they are a foreboding presence until they take to the ground or water, and it is once again easy to forget they are among the top predators here.

It is a good evening for human watching. Not only this dappled grey specimen, but along the wooded path between the reservoirs small groups of three or four gather by the waterside with their arrays of threaded sticks, smoke coming out of their mouths and calling incessantly to one another. It has often seen these groups of immature males in the summer months, though in the winter only the more mature ones, often more solitary in their behaviour, remain. Tonight, too, large groups have gathered in the park and by the canal, noisily displaying to one another before heading off to roost sometime after dark. Such sights and sounds have been unusually absent for most of the spring.

While somewhat glad that these sounds have returned, it is a mixed blessing; unnerving in their absence, they nevertheless have little intrinsic value. Reed bunting and dunnock seep’s and tieuw’s, a particularly tuneful whitethroat forced to compete by an evening blackbird, linnets twinkling… even the trains that pass every five minutes; they each contribute in their own way to the day’s slow exhaling of life before it darkens. The humans, like unruly owls, are disruptors.

It sees an oystercatcher pick its way along the edge of the island. It has a rather debonnair attitude, black and white with a regal orange-red bill to stare down at others, and even attacks a nearby dolled-up tufted duck. It rises, flies an expanded circuit of most of the south reserve — piping intermittently as it goes — before landing again to sophisticatedly probe the mud. Normally an anomaly to see them regularly, this year they are neighbours — nesting just up the valley at Ponder’s End — and will surely return before long, perhaps with young.

The sun, veiled by whisps of cloud, settles like a comet above the nearby towerblocks. Both bright and subdued, the day’s denouement fees like a film school experiment in establishing mood. The feathery tips of the grasses shimmer and glisten, flowers glow with captured light, but the water is chill, black and disturbed.

The gull surveys the dissonant scene around it. It is unnerved, but does not show it. “But morning will come,” it thinks and launches itself into the air. 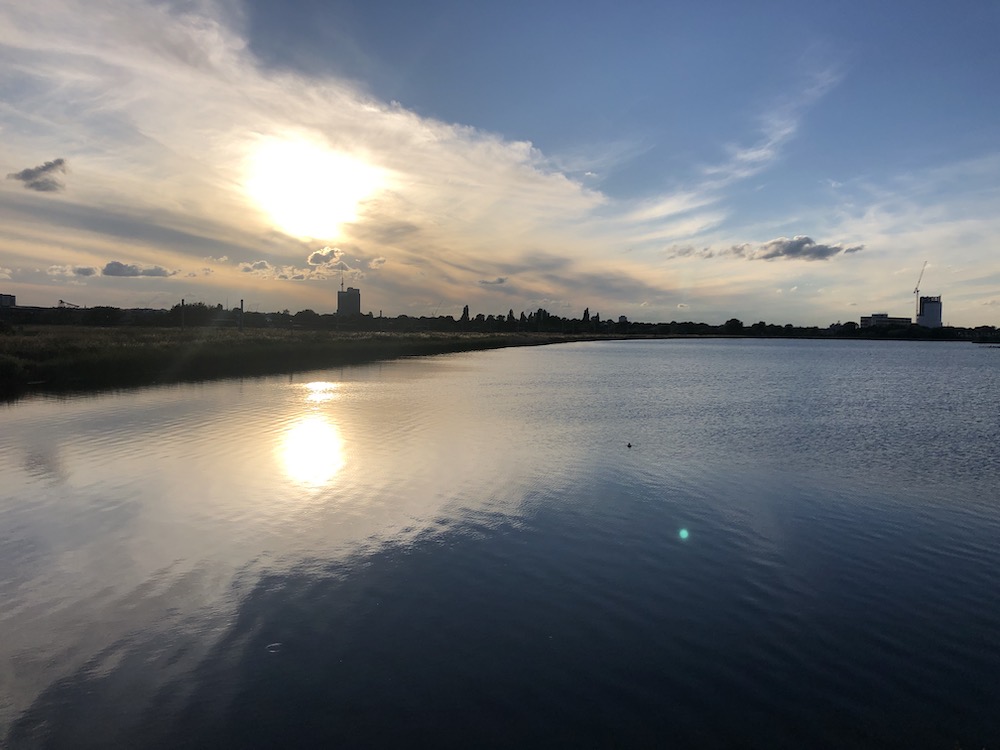 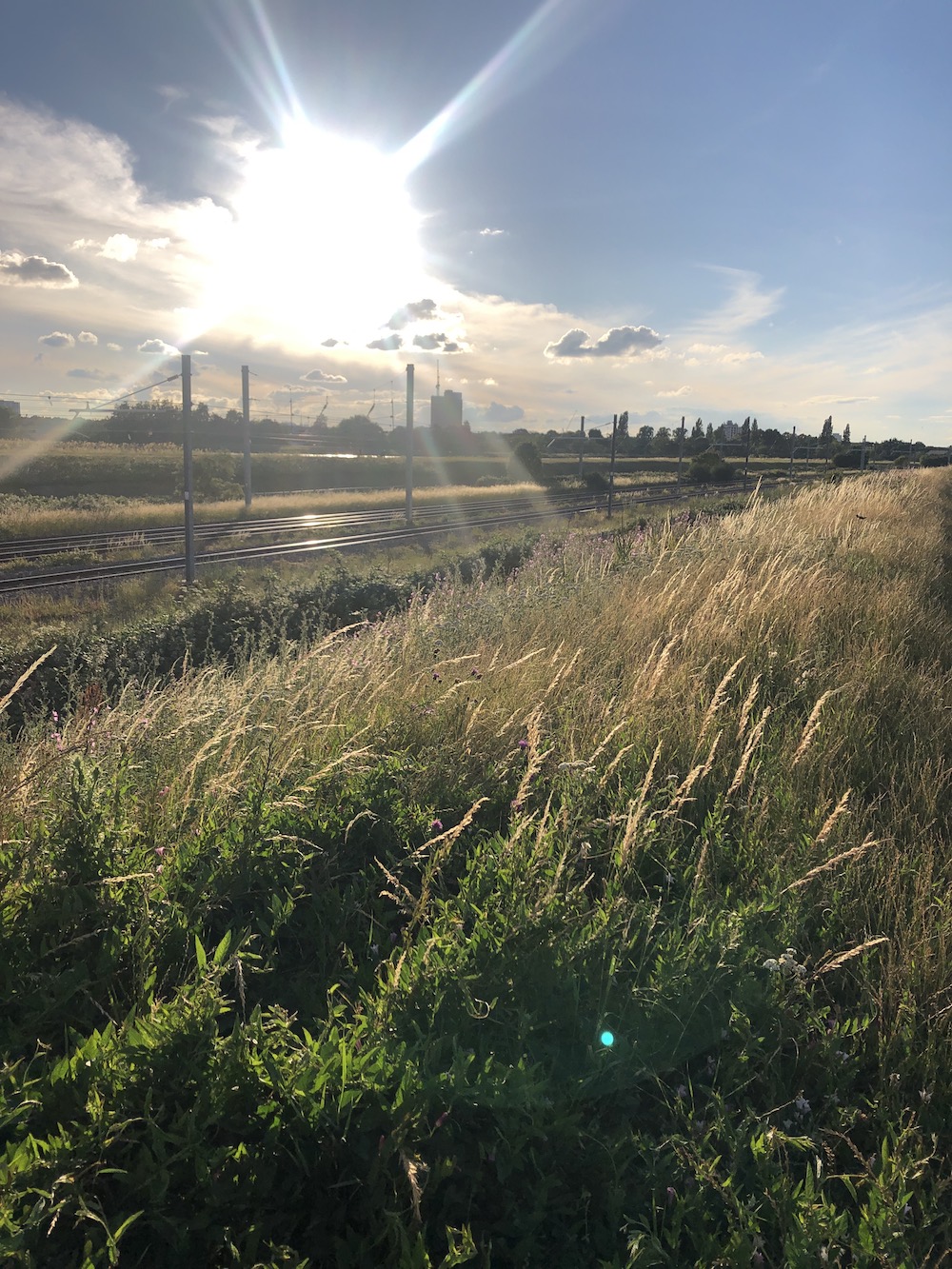 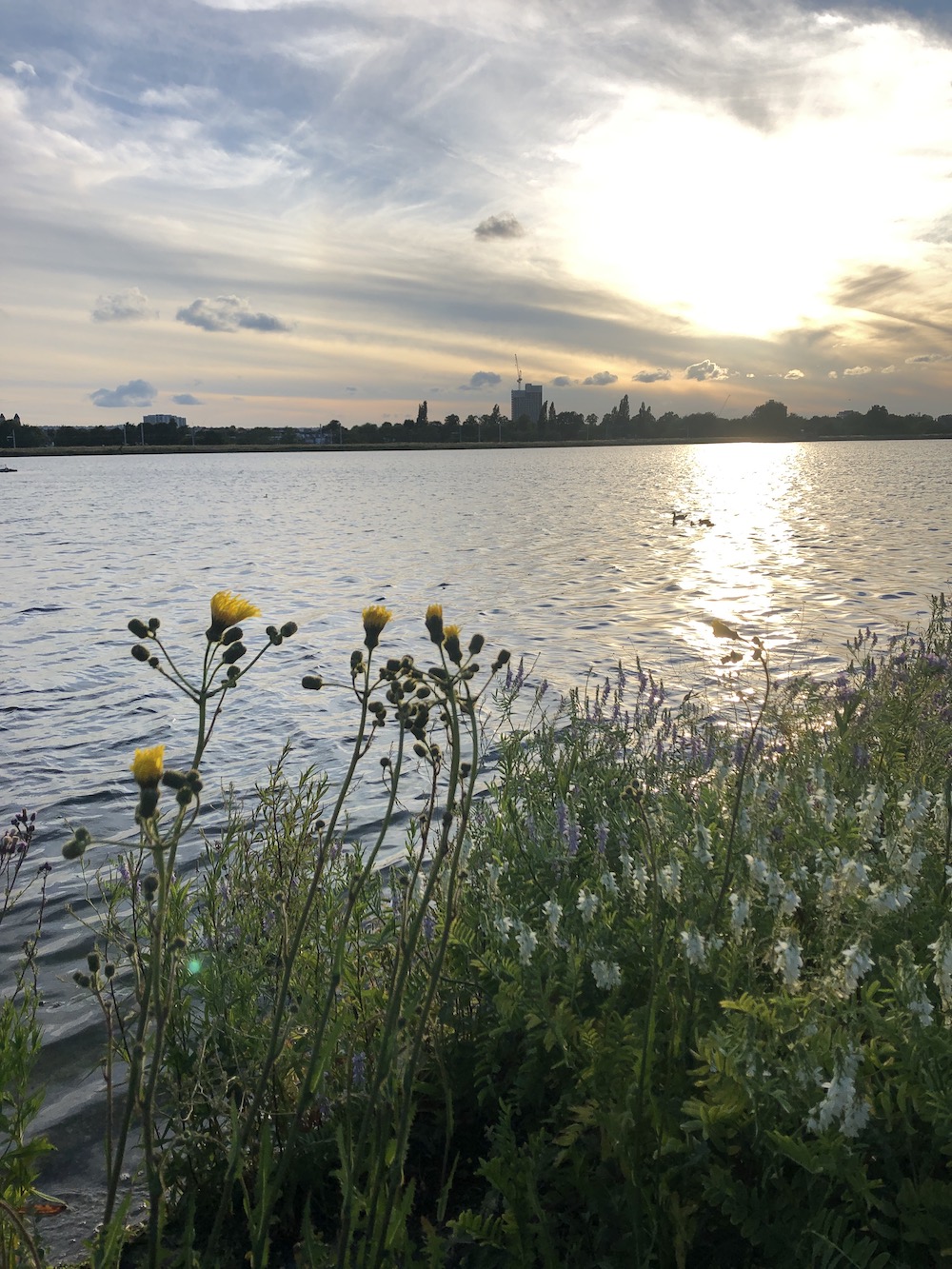