I walk from the Engine house up toward East Warwick, passing the usual popular willow on the way. Once again it thrums with tits and warblers. A young blue tit sat in the sun catches my eye. Filaments of down glisten on its back as if wearing an afghan coat in the sunrise dew at a music festival. I think I see a juvenile green woodpecker too — I saw something the right size and shape (not too green) fly across, heard a yaffle, and that’s good enough for me. One of the fishermen who likes to talk about the birds told me yesterday that he’d seen one about.

The swifts are slowly getting less numerous, though there are still plenty of sand martins about. Over on the tern raft I can see a very young tern chick — the first on site for two years — and also a hatchling black-headed gull. One gull crosses the water to yell abuse at me and, when a few marauding lesser black-backed gulls threaten the colony, is joined in the air by fifty angry birds dive-bombing and screaming their collective protective parental rage.

First day of the second month of the blog today — thirty-first day in a row writing — and as if to document the occasion I come across an early morning photographer, who is photographing a well-turned out fisherman at the overflow pipe, perhaps for a fishing magazine. I leave them to their photoshoot.

Near the same spot as yesterday I come across the same parent and child mistle thrush, this time joined by a third. More cautious than before, they fly away immediately as I arrive. Some birds feel like constant companions on my walks — the swifts, terns, canada geese and linnets — generous with their time, proximity and visibility. I do not always write about them, but colectively they are generally responsible for at least half the pleasure of the hours I spend at the reserve. They feel like old friends. Even after three days, I’m getting to feel that way about these mistle thrushes. I hope the romance lasts. A stock dove croons from a favourite ivy covered half-tree, ready to step in if things don’t work out.

At the next corner the egyptian goose chicks are down to just one. It’s cute as can be, and it’s heart-wrenching to think of the fate that befell the other two — almost certainly eaten by something. The parents bark at me as I pass. But I feel they could put a bit more aggression into it, and their piercing amber eyes could be more watchful.

A little further along a juvenile great black-backed gull has found a dead trout and is tearing at it with its heavy, chisel beak. A couple of adult lesser black-backed gulls try to wrestle the fish away from the giant, pale toddler. They wouldn’t dare were it an adult and even though it is already significantly bigger than them, they succeed in tugging the fish back to the water. A herring gull joins in but, on balance, the big old childish bully gets the best of the fight, and tugs some entrails out of the fish’s belly. As I draw closer the illegal fish rave disbands. Crows — winged jackals to the gulls’ hyenas — see their opportunity to extract a beakful, drop in to the brief window that suits their marginally less timid nature. A single common sandpiper peep-peeps its escape too.

Which reminds me that earlier this morning, as a kind of bonus trip, I cycled up to the top of Lockwood where I saw four common sandpipers in the distance being harrassed by a magpie. On the ride back I kept pace with some swift-chasing linnets.

Back on the main public path a cetti’s warbler scolds loudly from the bushes — everything about this bird is loud. In the same bush I catch a glimpse of a Jay’s white rump as it paraglides through and out into the open sapce between the willow trees. Rounding the corner I watch it and another hopping around in the lower branches of a mature sycamore, keeping surprisingly out in the open.

Though both looking very similar as far as colouring goes — a cross between tinned salmon and tuna, with a black mustache, black, white and electric blue wing panels, black and white rear end and salt and pepperslicked back hair — one is clearly more submissive, making obvious begging calls and gestures. I did not know fledgling jays looked so much like the adult birds. On closer inspection I can, if I squint, detect an unfinished quality to its patterning, but otherwise it’s a vefy accomplished first draft, needing little editing. Its parent squeezes the unripe kernels out of the sycamore helicopter seeds and puts them squarely in its gullet.

While it’s rare to have such confiding views of the jay’s domestic life, tey are pleasantly easy to see here, as indeed in the rest of London. A shy (but noisy) bird of quiet, expansive woodlands in the countryside, it was a highlight of any car journey to see them butterflying from one copse to another, perhaps the only view of one you’d get that month or season. Here in London its not unknown for them to rumage in the tiny front gardens in front of tower blocks on housing estates. A far cry from the memory I have of, sometime in mid winter, somewhere in, or near, North-East Wales, in the kind of silent, leafless (save for the dead ones on the ground) forest they use in thrillers, watching two jays, each one taking its turn on point, making their way through the brown-lit scenery. They will always have that romance for me. But they are crows, after all, that most intelligent, adaptable of families. Like foxes (who share the Jay’s frightening screeching), it’s their destiny to bring their mystical, rural magic a little closer in.

As I leave them I take one final look up into the tree, and see the juvenile’s backside pointing down at me. With its white rump and undertail feathers, and the very slight downy softening of the feathers, it looks like its wearing a nappy. How appropriate.

While fiddling with my bike lock before stashing it in my backpack, a heron made a speedy glide across the open sky. With wings half-tucked into a downhill skier’s pose, and a predatory directness, I thought for a second it was a red kite.

P.S. Someone saw a greenshank this morning, but I missed it by a matter of minutes.

P.P.S Just remembered this photo of a jay. Will leave it as an exercise for the reader to guess which bird I, and several other experienced birders, were tricked into thinking it was by a kind of optical illusion. 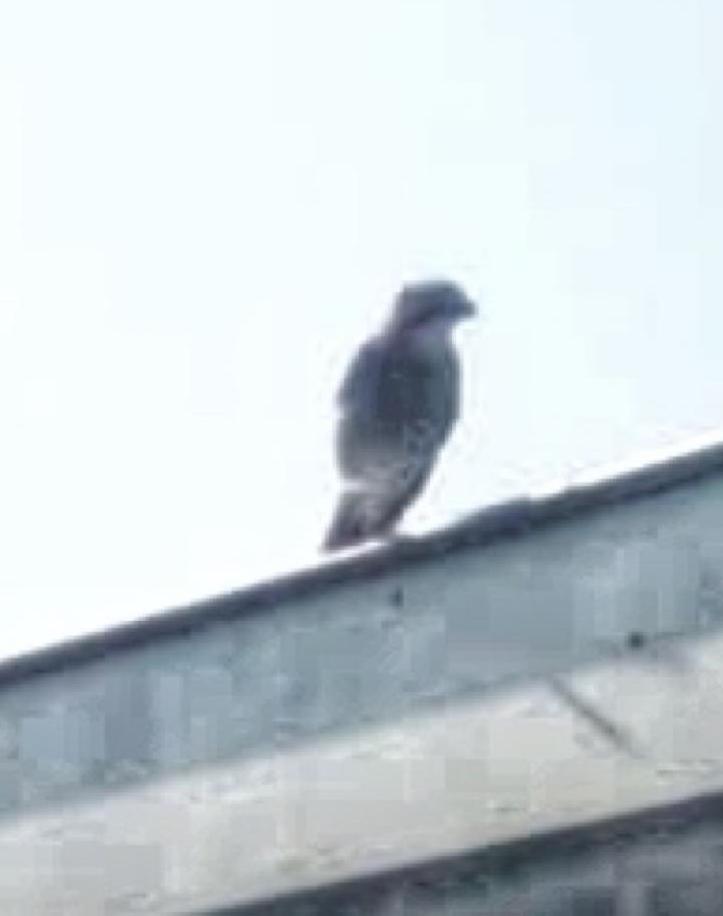