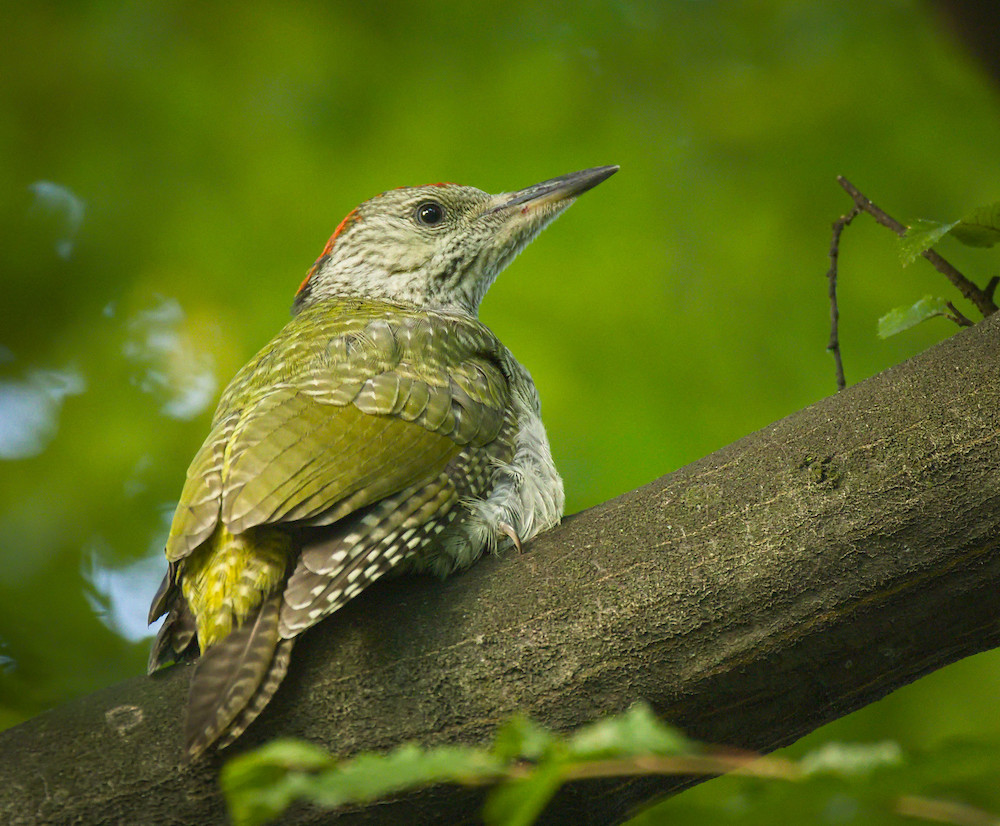 I was woken, right on time, by a singing crow:

More inebriated karaoke than dawn chorus. At the reserve the parakeets were also particularly noisy. Not a morning for sensitive ears.

Signs of the season:

And all of the above can also be taken as indications of a tired pen this evening.

Which I will unslumber as best I can to write of the delinquent Green Woodpecker skipping school in the dappled mid-lake glade. It gave itself away with a supressed chuckle, aided by a cocky, false sense of security that it was perfectly blended with the shimmering, multi-layered greens of the sunbeamed woodland foliage.

But it was in the end the blander, dirty grey barring on its front that led me to it. Seeing only a few feathers through the leaves, I thought it was a sparrowhawk at first, silently plotting its next supermarket sweep through the birded aisles of the trees. A lean to left — simultaneously by both bird and I — revealed the long pointed beak, Hollywood-idea-of-a-computer-hacker red haircut and mustache drawn on with a black marker. It looks like a bad identikit drawing of a jay in fact, or a rejected, disarmingly naive character from Modern Toss. Reading up now, I just learned that the lack of red in the mustache indicates that it was a female — very unusual for a bird to be sexable so young.

It hopped about on a broad, horizontal branch — green woodpeckers are far less vertically inclined than their spotted cousins, and often spend tim on the ground eating ants — made some ineffective movements at pecking the bark to search for grubs. But the half-hearted energy and occasional lonely whimpers suggest that it still leads a cossetted, spoon-fed life in the care of its parents, though recently I haev only ever seen one bird by itself.

I remember exactly where I was when I saw my first one, descending the path from the clifftop to the gorge bottom at Malham cove. Their unique call, the yaffle, an exaggerated snigger sounding like Muttley in Whacky Races, was something I’d read descriptions of, but it’s hard to do justice to in written form (as is true of pretty much any sound made by a bird).I think I heard it before I saw it, and was wondering waht on earth it could be, before catching a glimpse of a bright green torpedo dashing between the trees on my left.

It’s potentially the most vivid and detailed memory of seeing a bird for the first time I have, and certainly the earliest really vivid one. Nowadays I can recount the time, place and often the sensation, atmosphere and feelings too for any new bird added to the life list.

For instance, in early February on the last still, blue-skyed saturday before three weeks of constant storms, I walked through housing estates, recreation grounds and regional park rights of way from the cancelled bus service in Morden to Poulter Park, where I saw my first siberian chiffchaff, yellow-browed warbler and several firecrests in the laser sharp light of the kind of sun that cuts a tear in the fabric of winter and gives a glimpse of spring. I remember the tiny flies lit-white in front of the dark gloss of ivy, the chatty local man sharing memories of when the Wandle Valley was really wild, and asking the name for the long-tailed tits. I spent half an ohur in the company of several birdwatchers who’d travelled in from Surrey — the opposite pole of the London birdwatching globe to me — and, in the convivial atmosphere, I was offered a lift back to Morden, but preferred to walk along the river and feel the breeze emerge in the expectant air.

But of the more commonplace birds, very few such memories exist. I have no idea why the green woodpecker should be one of them.