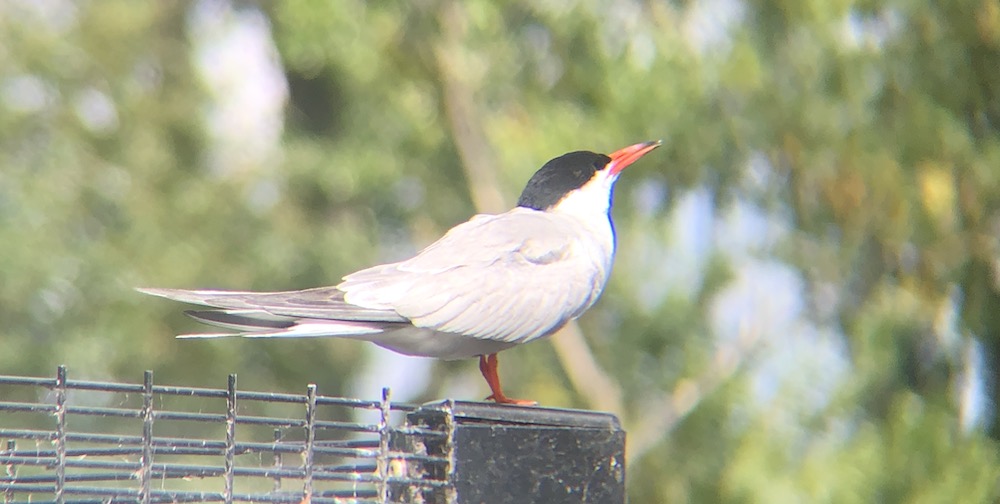 It’s August, and the wind tears up summer’s contract to push its way up the Irish Sea. It brings with it a host of beach-day ruining clouds, sending their fine droplets of clear, fresh water to mingle with the salty spray. The waves wink from the water, daring you to stop throwing stones and swim like a man. You throw a stone and it duck-farts into the breakers hurling themsleves at the pebbled beach.

This is Cemlyn Bay, in Anglesey, the county-sized flat island placed, as a joke, next to Wales’ most magnificent Eryri mountains. Though flat, and blessed with horizon-swallowing beaches, its coastline is mainly rocky, boasting mile upon mile of rugged (though seldom towering) cliffs and magical inaccessible coves. Cemlyn, an unusually wide cove in the crook of the North-western finger of the island, is in many ways typical, with the land climbing to low, rocky headlands on either side.

But what sets it apart is the wide shingle spit stretching across it, holding back the sea and enclosing a shallow lagoon. Within the lagoon are several islands, rising only a foot or two above the brackish water. And today, as on every summer’s day this year, and for many years past, the sound above them drowns out any half-hearted roar the wind and the waves try to muster. Because this is the site of one of Wales’ largest tern colonies, and thousands of sandwich, common and arctic terns — not to mention their usual sidekicks the black-headed gulls — join in creating a cacaphony to rival the noisiest factory floor. They wheel overhead in a constant supply line of tiny fish and rancorous defense of the colony from intruders.

I tell you this because it was where I saw my first ever terns, and it’s an experience hard to forget (in essence, though the details may fade).

Terns, like waders, are contenders to be in every birder’s top three families of birds. Most British species look, superficially, like small gulls — grey on top, white below — but can be told apart not only by their size, but by the sleek black bandana tied about the top of their heads, generally slimmer, more pointed appearance and, usually, a forked tail. They also fly with a far lighter, butterfly-like flight. They are gulls re-branded as tropical angels.

And tropical is the appropriate adjective. All our tern species embark on epic migrations to and from their wintering grounds off the coast of Africa. Sometimes, arriving back in April, they bring with them a few Arctic Tern’s, en route to the Arctic from the Antarctic (making them the most well-travelled creatures on earth). The return of the Common Terns, however, brings with it not just the joy of spring and an excisting “year tick” on the birdwatcher’s list, but the knowledge that most days at the reservoirs over the next few months will not be shy of at least a little avian entertainment.

They are one of the most oft-referred to birds in my notes. As far back as the third of June I came across one trying to swallow a fish about the size of its own head, trying a variety of angles before eventually succeeding. Day after day I slow my already slow walk around the reservoirs to keep pace with one as it flies balletically a couple of metres above the shallows, in search of the fish fry that form the basis of its chick’s diet. Hovering and diving from time to time, mostly unsuccessfully, and shaking its shoulders afterwards to dry itsefl like a shaggy dog. Today I walked by somebody sat at the waters edge watching the terns’ frenzied efforts to catch what must’ve been a decent shoal of takeaway meals.

And there are chicks to feed them to this year, after a barren 2019 due to wind damage sustained to their usual floating nesting platforms. Over the winter new ones were put in place and a colony of black-headed gulls has mushroomed on one of them, in the midst of which sit around ten terns on their nests. The allying of these two species is common throughout the country, and a fragile peace reigns most of the time — the black-headed gulls are noisy and numerous, providing a strong deterrent to the larger gulls, but small enough for the terns to be able to deter from attacking their nests. In effect, the gulls are the terns’ pack of guard dogs, though the terns play an active dive-bombing role too. Together they form an effective defence against any marauding larger, gull neighbours (nesting on the other island, and who eat chicks for breakfast). They all rise up from the colony in a panic to chase down, deafen and frustrate any would be carnivore. It can sometimes be hard to tell which bird is mobbing which, or whether they are actually aiming their aggression at me (aside from on the occasions when the colony sends out a single designated screamer by itself to berate me).

The nests are difficult to pick out among the vegetation on the island, and, despite looking, I’ve barely seen how things have been developing. I had a look through Daniel’s telescope today though (he surveys wildlife on the reserve) and some of the chicks now look almost old enough to fly. I look forward to spending late summer days sat at the edge of the reservoir bowls, scraggly-looking young terns, naive and tame, stood only a few metres away begging for a meal.

They really are the best.