Wind like winter, cold and cantankerous. Rumaging between the buttons of my not too warm jacket and slapping my cheek with a bony palm. Throwing swifts like knives, drawing gasps from the audience of my giddy face. Wowing and winnowing the morning according to its whims.

A jay with a big, uncouth mouth shouts out of the bushes while young blackcaps noodle on their syrinxes in search of a voice. The long-tailed tits are at it again — they always are — and dangle from the trees like Fagin’s gang of ruffians. A pied wagtail attempts to spoon-feed flies to its two children, but a belly-fluff young crow stomps boisterously between them, scaring them off in its atempt to play.

At the fisherman’s hut, in all the trees’ shelters, the air behaves and lets the breath catch up. A juvenile robin is midway through its moult. Soon it will be all grown up, but for now the splash of red leaking from its brown breast makes it look as though it’s been shot. A chiffchaff rushes snatches of song out of the treetops and they are packaged — “29 Jun 2020, 8:00 AM, Walthamstow - Unusual double speed chiffchaff song” — in my ears for later listening. A green woodpecker half-yaffles — yaffs, I suppose — unseen in the wooded neck of land. The colonies on the island are noisy enough though.

By the outflow pipe, on the underwater sandbank it propagates, stands a Grey Heron. It’s a beauty, proud and balletic, a bird of the regency period. It’s crotch-deep in the water, but each slow, poised pace it takes does not soak or splash a single feather. Its pronounced black eyebrow — very a la mode — extends behind the eye in a mulleted mohican, and thick black stitching perforates the white cravat of its strong, angular neck.

But best of all are the lace-like plumes that descend from its throat and also lie draped across its back. Superlatively delicate and infinitely tasteful. Lakeside haute-couture at its best.

Whenever my mum sees a heron she will comment on how big it looks. Perhaps they are getting bigger. This one looks as powerful as any I’ve seen. But also nervous. Unlike those in Holland — which strut about Amsterdam almost as tame as pigeons — British herons are cautious around humans. They tense their bodies and draw the suggestion of a flight-ready S-bend in their necks as soon as a human approaches, planning their departure well in advance.

I edge as close as I dare. I notice that the black smudges against the sandy bottom of the lake are not, as I had thought, clumps of water weed. They are the plodding bodies of the giant carp that roam the waterways like trainee manatees. Too big a mouthful for the heron, they swim slowly and safely despite its shadow. They are, I imagine, big enough to have achieved invincibility in our sterile, bear-less country.

A grebe swims next to them, just beneath the surface. I can see its legs pumping, looking like a frog, and its neck jonesing for a more manageable fish. 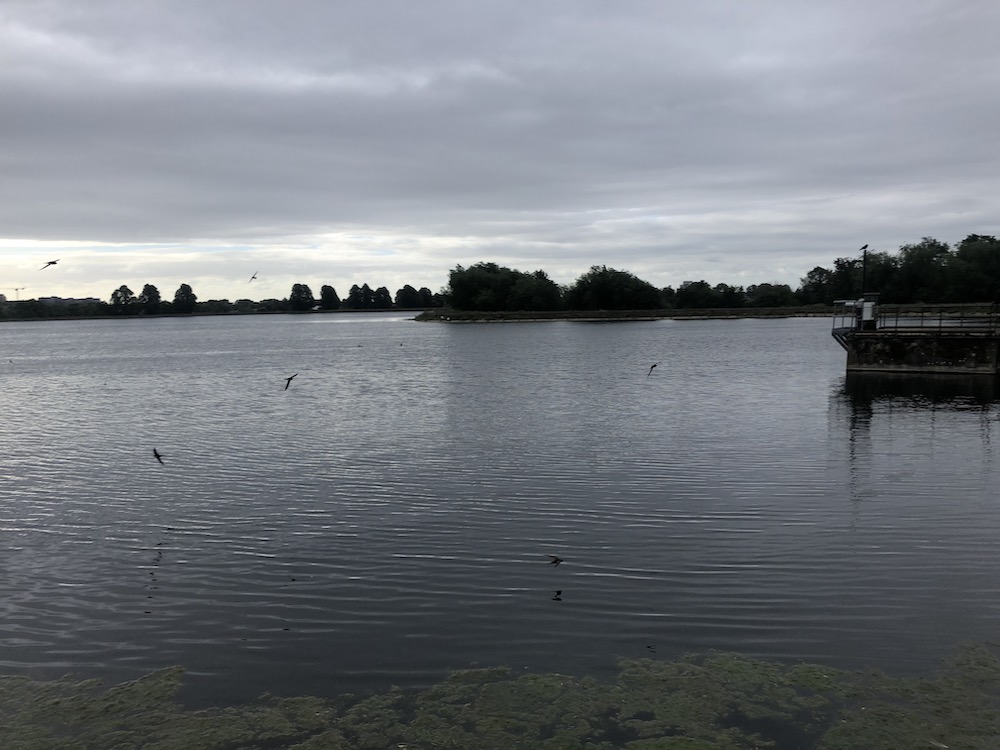