Tree-covered Pole Hill on the edge of Epping Forest stands to the north, and its dark greens almost blend with the venomous, heavy puce clouds gathered above it. Thunder rolls down the valley and the eerily calm water of Lockwood, playing host to seven regal swans, is full of portent. Unseen aquatic mini-beasts make pinprick concentric circles on the surface. It quite literally looks like rain.

The usual pre-storm birdsong nervously keeps up appearances — a blackbird, blackcap, chiffchaff and whitethroat — and the army of canada geese tries its best to put on stiff upper-lipped airs. A handful of gulls perambulate mid-lake, and across the water flies tower in narrow threads, stage rigging for the fake, cut-out trees.

The play is about to begin.

The air, tepid and inert up to now, is persuaded to march south and bristles the hairs on my arms as it goes by. Two sand martins battle it, alternately powering through or going with the current, like canoes paddling the rapids. One, then the other, arches its wings into an exaggerated ‘v’ and glides down to the water — now ruffled with the wind’s children —, opens its gape and takes a sip.

The atmosphere has wholly changed. The sky no darker, the sun no less buried, the air equally humid, but it is a different day now. The imminent is now immanent. Waiting for the rain to come, but it is already here somehow. The thunder sounds again and a single swift valiantly gives chase.

At the top end of the lake ten linnet bounce, twittering away from me, and a number of young Pied Wagtails — I estimate seven — go about their playful business. In their frivolity they are immune to the clouds of doom blotting out the sun, scampering after flies and playing “tick”, chasing each other in tight airborne circles. I once saw similar scenes around an almost dry river in the French Pyrenees, cheering my road-weary eyes with their gaiety.

Less comically long-tailed than their grey cousin, they still have impressive enough tailpieces, though the appearance is that they are wagging the tail rather than the other way around. One of the youngsters is completely tail-less, perhaps after a run-in with a predator. Its cute appearance while on the ground — a ball of wool with a beak — becomes slightly disturbing as it takes to the wing. Tense, I half expect it to tumble over and over itself and plunge into the water. Maybe I spent too much time playing Angry Birds.

Along the back end of the reservoir the show goes on, oblivious to the gathering storm. The linnet flit hither and thither, and a flock of Starling — growing to around 40 birds by the time I leave — alternately envelops the summit of the water tower and several patches of shoreline. The pied wagtails have followed me too, and that lesser whitethroat still sings provocatively from the scrub.

My dry luck has held out this long and I choose not to tempt fate, stepping up the pace on the return leg. The starlings are content to stay guarding the tower, the linnet eventually grow wise to the fact they cannot outrun me, and so outflank me instead and return to feed in the weeds behind my back. But the wagtails keep me company all the way.

I assume there must be several newly fledged families around. Most of the birds are very young. At least one is still white and fluffy on the head, like a teddy bear, and all their faces have the unfinished look of an old master’s sketch hanging in a museum. I wonder I havent seen any responsible adults. Eventually I do see one female and one male, though I don’t envy their childcare arrangements.

If you asked me to describe a pied wagtail — which, in a sense, by reading this, you are — I would say it’s a small, long-tailed black and white bird, neatly tailored like a duke in evening dress.

But recently, with the added attention I’ve been giving the commoner species, I’ve begun to notice something — they are really quite untidy looking things. The species on the whole, known in most countries as the White Wagtail, is far cleaner cut, silver or iron jacketed, black-hatted and with a clean white shirt on beneath. From Iceland to Turkey this dandy steps out on the town.

But for some unknown reason, Britain and Ireland have our own resident subspecies. Darker on top, close inspection reveals it’s far from a beautiful gloss black, more like lead or low-grade coal. And the seams between the various pieces of the outfit are messy, colouring over the edges.

Without wishing to sound jingoistic, I doubt there’s a better avian example of the plucky little Brit. There is something quite poetic about these messy, cheeky little birds, proudly holed up in their island home, dressed in their glad-rags and not minding too much about the rain.

That, in the end, comes from the south, bringing the swifts alongside its penny-round droplets. 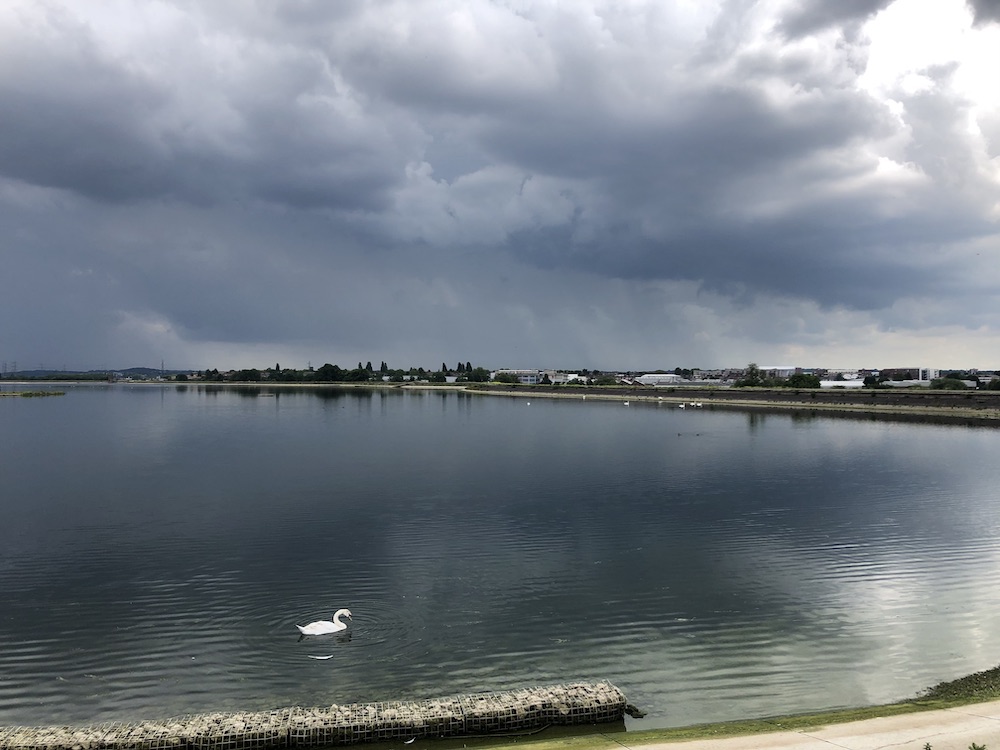