This evening a peregrine drew my eye up to the pylon with a few drawn out screeches. Something’s going on with the electrics on site — steeplejacks have been clambering all over the pylons for weeks giving them a fresh coat of paint (disappointingly not electric blue), and this morning I was greeted by a young man in a highly visible jacket spray painting fluorescent symbols on the ground at intervals. Or maybe he is calling about the plumbing.

Last year the pylons were regularly festooned with a young peregrine, screeching like a harpie for its parents to bring it a nice plump pigeon. One can imagine it, in whatever age is the peregrine’s equivalent to it’s early forties, looking back with embarrassment at its needy, bratish teenage behaviour. Hardly the noble imagine a mature peregrine likes to cultivate.

But all creatures are young once though, in the case of some birds, not for very long. I’ve written over the past weeks about the young birds popping up all over the place. Many are now almost indistinguishable from adults, or at least recognisably not far off. Young gulls on the island are beginning to exercise their powerful wings — not powerful enough to lift off yetm but it won’t be long. This evening I saw a juvenile tern fly from the tern raft but was disappointed on reporting it to be told that it was likely a visitor from other waterways — our terns are likely an agonising two or three days away from their first flights.

The oldest pochard and mallard ducklings are about four fifths the size of their mothers, but still kindergarten soft. The young shelducks are, after a long while looking like they could perhaps turn into swans, finally taking on their parents’ shape. On the other hand, ducklings from other mothers are still hatching regularly — I found two new broods of mallards two days ago, and the first brood of tufted ducks I’ve come across this summer.

Despite its drawn out, blurred profile, there are some birds for whom the breeding season has obviously passed its zenith — a while since I saw a really tiny pochard chick, and the geese were done with incubating eggs a long time ago — but for others it is just getting into the swing of things. The Great crested grebe is one of these.

For a bird that felt like such a luxurious treat when I was young &mdsah; a highlight of trips to Colemere in Shropshire — the grebe is surprisingly common. Much like the great spotted woodpecker, once you start to pay attention you realise they’re everywhere. Any body of water bigger than about the size of a football pitch is perfect habitat for them, and as the wetlands boasts ten such lakes you can well imagine that grebes are a common bird here, and you’d be right.

This morning I had the rare pleasure of watching two of them in flight, one of them flying just a few metres ahead of me. They fly direct and fast with rapid beats of wings that are longer and more pointed than their rounded, fluffy, floating bodies give the lie to. Their necks are outstretched and the head held a little lower than the body, with a well-proportioned elegance reminiscent of grecian pottery.

This elegance is played out to the full in one of the most intimate spectacles of British nature, when a pair perform their courtship ritual. They face one other and coquetishly peck their partner’s cheek, with bill puckered downwards and black, tan and white collar feathers ruffled. And then for the finale — and not every time — they dive under the water, remerging with beaks full of waterweed and rush towards each, eventually standing upright in a frenzied treading of water and touching of breasts. I’ve seen the full performance three times, each time at Walthamstow.

This evening I was treated to the far less aesthetic sight of one of a pair dragging an enormous sheet of waterweed as a contribution to its gradually accumulating nest. It looked like a crocodile, such was the quantity of weed it carried. It may be the same pair who nested early in the year, but their floating nest broke free and sailed ots cargo of an egg over to the reservoir side, where curious lockdown-escaping visitors’ overzealous inquisitiveness and photographing eventually led to it being abandoned.

They weren’t the only grebes to breed earlier on the season. There have been a couple of youngsters gradually growing up near the overflow pipe where herons and terns fish. Their frog-like legs and underwater swimming at to the gautlet of fishing styles the fish must evade. And there have been other nesting attempts elsewhere, and maybe some have been successful.

But late summer tends to be the busy period. At its peak, Low Maynard in particular might contain five or six broods of two to four chicks each, sporting comical, incongruous stripy heads that feel like they shoudl belong to a different species to their parents. Like a caterpillar to a butterfly.

Highlight of watching the chicks is their habit of hitching a ride on their parents’ backs, for safety, warmth and, one has to assume, pure idleness. When they are very young it’s not uncommon to see a single adult carrying multiple youngsters, their bodies nestled into the adult’s downy back feathers and concealed beneath its wings, only the heads peeking out to learn about the world and tease the flummoxed, chick-eating pike.

This morning I came across a grebe with two chicks close in beneath a willow. As they swam away, one chick climbed onto its back, was absorbed almost instantly and became a stripy conjoined head. 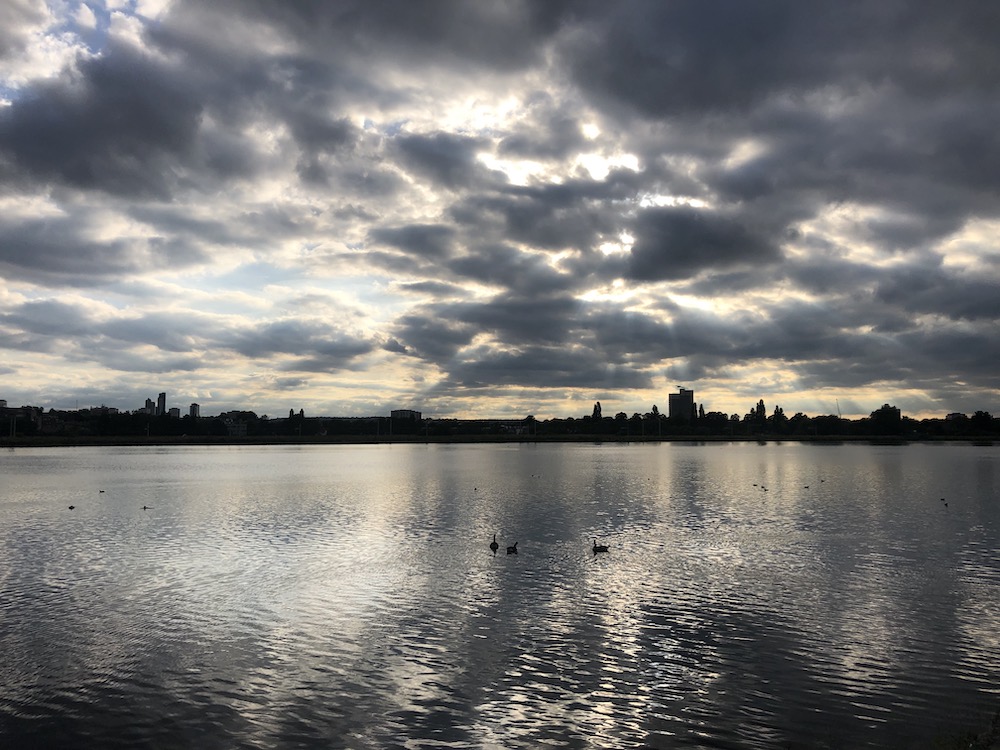