Busy mornings and sleepless nights meant I hadn’t seen the early morning reservoirs for several days. Nor did I plan to today, but a particularly sound night’s sleep followed by a thoroughly bright and early awakening meant it was an inevitability.

Only a few paces inside the reserve gates I was greeted by two kingfishers bombing across from the River Lea to Coppermill Stream. They don’t look half as fast, nor as colourful, flying in front of the open greenery as they do when shooting along above a dark and glossy river. Nonetheless, two kingfishers is a great start to a morning’s birding.

At East Warwick about a dozen swift honoured me with their presence, a densely packed mob of coots menaced a corner of the island, and a common sandpiper rose up ahead of me to flick its way over the water to safety. A little further along I was pleased, and a little dismayed, to flush a green sandpiper. Like the common sandpiper’s less uptight younger sibling it flew with far looser beats of its dark wings, looking twice the size as a result. It rose up, up and away flashing its white rump as it disappeared off into the clouds.

On I went down to No. 5, spotting a male sparrowhawk cruising the poplars on the way. Arriving at the water’s edge my phone vibrated to announce that a turnstone had just flown down to inspect East Warwick island, made a couple of disapproving circuits and departed immediately. A minute earlier and I would have seen it, not only a new patch tick for me, but also among my favourite birds. Birdwatching is a cruel hobby sometimes. They tell you about the dizzying highs, but not about the crushing lows. Kids — Just. Say. NO!

Never mind. I’m sure I won’t have spent the next twenty minutes cursing to myself, will I.

To be fair, I did still enjoy a brief view of a green woodpecker, the still approachable and dinky little ringed plover, and even the macabre sight of the pint-sized corpse of a shelduckling. And the one that got away spurred me on to sit by the lakeside and wait in the sun for something else good to pass by. The number of swifts in the sky grew moderately and a little reed warbler subsong emanated from over by the fisherman’s hut in a gentle requiem for spring.

This idyllic scene lasted about twenty minutes before Chris paged again — his luck (and patience, skill, eyesight etc.. ) — are in at the moment. I hadn’t taken the time to visit the far south corner of East Warwick, but from here it was apparently just possible to see a Dunlin on the other side of the railway tracks, feeding on the concrete beach that graces West Warwick’s south end.

A few minutes later I was there, staring acros at a little speck of bird cowering beneath a tall weed. It was no turnstone, no honourable self-found bird, and not even a decent view, but it was at least a patch tick. I calculated I didn’t have time to walk around and get back home before work started in earnest, so accepted that the morning’s birding was over, and left others to feast their eyes on the remaining highlight of the morning.

Evening, and twenty woodpigeons — a notable flock — scarper as I approach Lockwod. A few sand martin weave southward, and a good smattering of gulls gives character to the expanse of water. Small groups of cormorants propel themselves home to roost, arrayed in straight lines and wings beating steadily like a wind farm.

As I follow them south down the last stretch of the reservoir-side path I come across a group of canada geese, and all but one of them panic and fly away. The one left behind is still mid-moult and yet to regain its powers of flight. It bundles itself over the low brick wall and into the water. It’s a scene of such tragicomic brilliance that I almost cry with laughter. I think we can all empathise with that goose’s fate. Less though the recently killed body of another goose I find abandoned (temporarily I assume) by a fox I startle. It does pay to be able to fly.

The birding not being outstanding I consider that it will only take five minutes to cycle to the south end of the reserve and check out its more hospitable lakes again. As I get within striking distance of the far corner of East Warwick I consider… no, it can’t be… but no harm in checking… no, it won’t be… but, but… but it is!.

Remarkably the dunlin stayed all day (normally, I’m told, they pass through very briefly, unless they’re properly grounded by foul weather). I get on my bike and cycle up, under and down the railway verge. I’m not 100% sure whether that’s in breach of the conditions of my permit, but it hardly seems important right now.

Climbing up the bank of West Warwick I keep a low profile and sit on the grass. I look up and down the concrete shelf climbing out of the water, but all I see are ducks and several vaguely bird-shaped agglomerations of stones and weeds. It can’t have been a trick of the light… can it?

Eventually a bird appears… but it’s a common sandpiper. Surely not. It was… it was smaller… and it looked like a dark smudge underneath… and there was no bright white to speak of — I would’ve noticed… and I saw a longer beak… did I? Or… did I?

Unsatisfied with the diagnosis I obtained a second opinion from Dr. Edge A. Little-Klosse. The departure of a couple of resting tufted ducks (sorry) revealed what I’d known/hoped/imagined/prayed all along — there, a foot from the shore, stood a well turned out adult dunlin, palm-of-your-hand small, but with a long, droopy-sad, black beak giving it the gravitas of a much bigger bird. I edged closer still, marvelling at this bird’s tameness, savouring its parochial behaviour as it, in turn, savoured whatever foodstuffs it was managing to fish from the shallows. 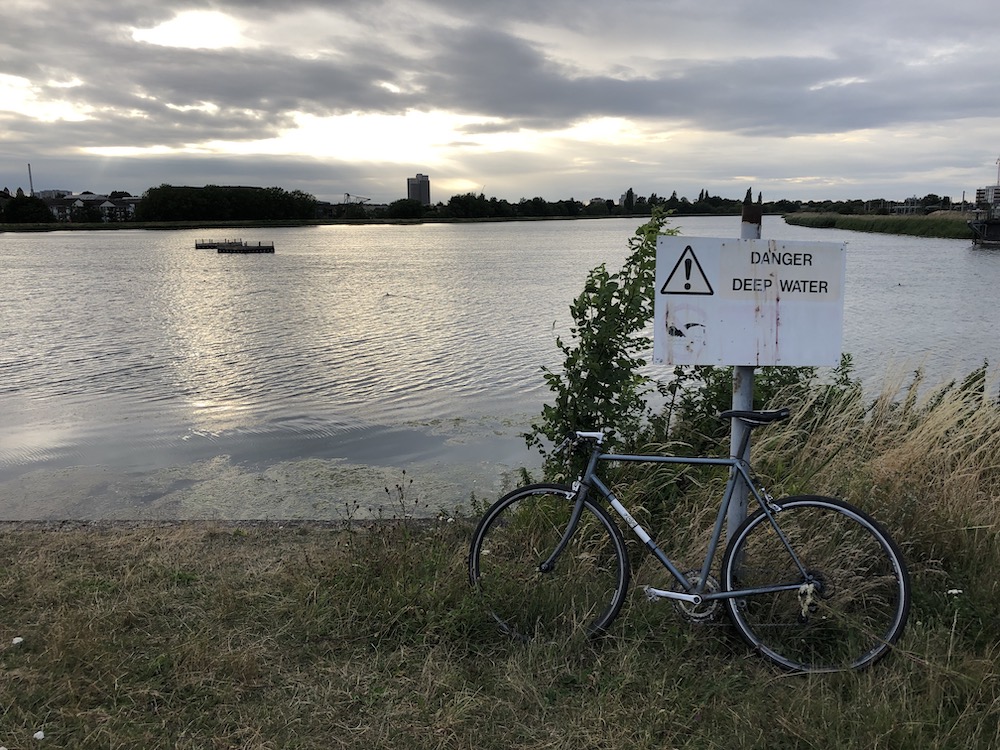