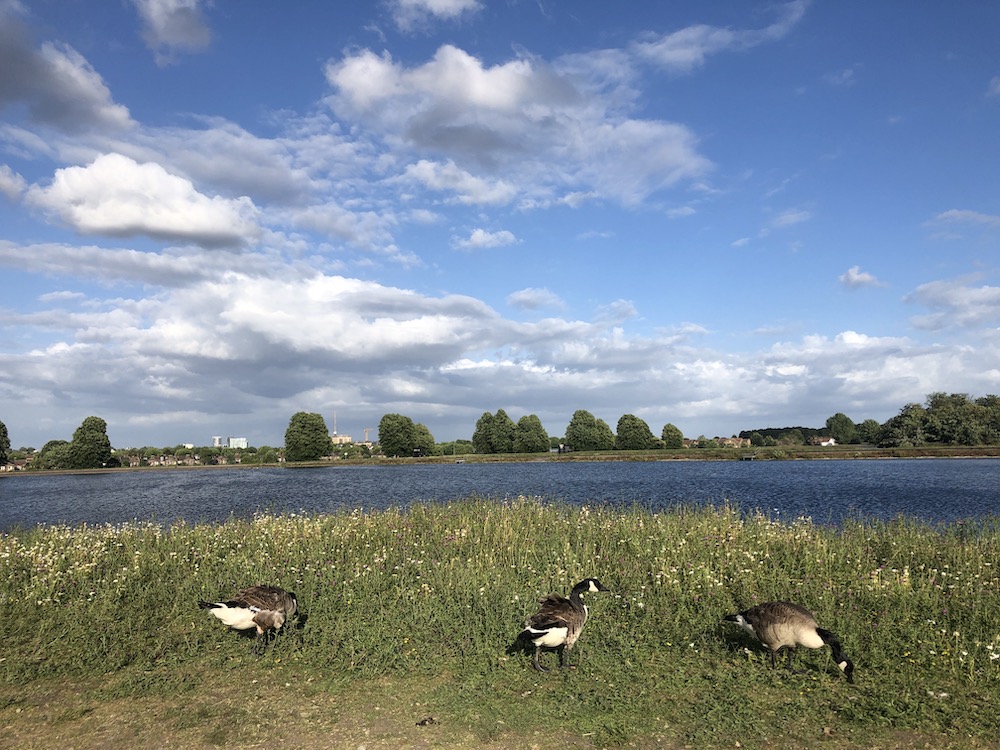 First birds on the patch today were a chiffchaff, whitethroat, and even my elusive friend the lesser whitethroat with its neat steel grey hood. In plain view in a bush at the side of the main track, they had congregated to pick insects from the leaves. Before long, these little groups will be swollen with this year’s young and willow warblers returning from their haunts further north. One of the joys of late summer.

Before I could return my pen to my pocket a 10 spot ladybird had alighted on it, demanding to be written about. You win, ladybird. You win. 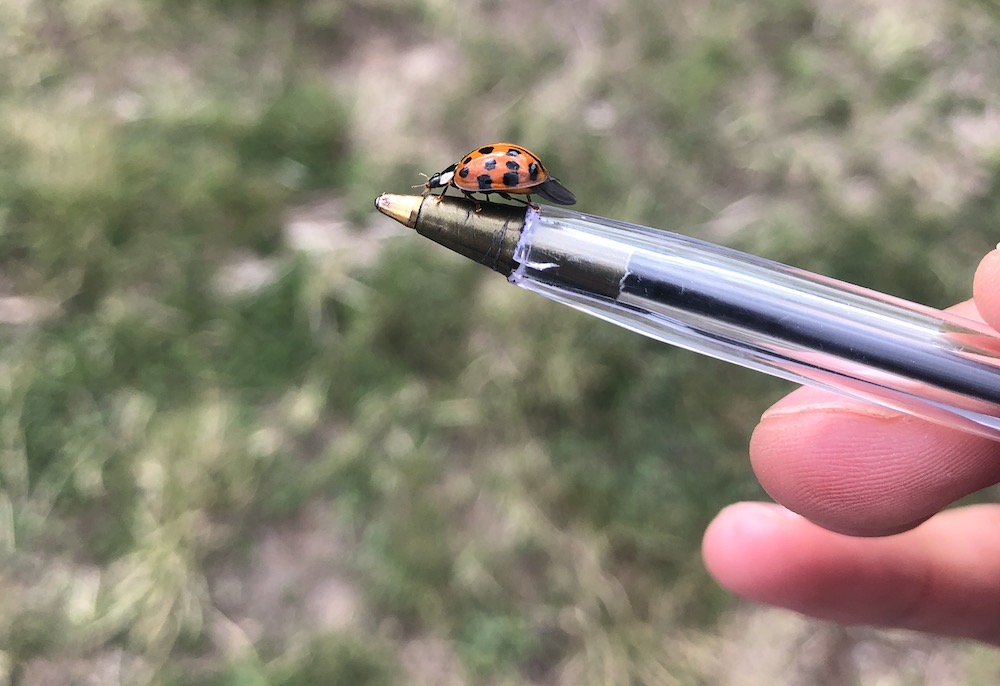 A surprisingly windy evening, it brought out the air ace in every bird that dared take it on. Stock doves and woodpigeons, never sluggish but nevertheless pretty ordinary flyers, were whipped along like banshees. Small numbers of house martin did their usual dance above the lakes and trees. Even a heron was flung into gymnastic tumbles as it attempted to land in a waterside willow, exuding a gangly deftness not seen since Peter Crouch’s footballing career ended.

But the wind, as is ordinarily the case, reduced most small birds to cowering in the bushes, and it was a silent, relatively unfeathered striding of the bounds. A middling flock of starling taking to the air briefly and a great spotted woodpecker glimpsed in a tree (even these bright and noisy birds, far commoner and easier to see than you’d expect, are hard to pick out between the late season leaves) where about all the world of small, tree dwelling birds had to offer. I entertained myself for a while observing the various types of umbellifer I cannot identify, and wondered if that fisherman I’d walked past was really eating fish food as if it was a bag of kettle chips.

The bigger, water-dwelling birds provided more than enough entertainment though. Herons and egrets clacked and grunted from their heronries, and dotted the shoreline with tentative attempts to learn how to fish. A few terns showed off their diving skills, one of them plucking a fish from under the nose of a great crested grebe and then bee-lining back to the colony to feed its incubating partner. Cormorants glided back in small groups to roost, their crops hopefully full of fish. And a melee of incorrigable black-headed gulls whirled cacophonously around some unseen item of interest in the water.

The more unusual duck species on the reserve are having a good breeding season it seems. Three broods of shelduck, ranging in age between a few days and almost two weeks, are dotted about. Their attentive parents dutifully guard their progeny, whether it be sat on a jetty with seven heads poking out from under a wing, or chaperoning twelve black and white fluffballs bobbing on the water like whirligig beetles. A very new looking brood of four yellow pochard ducklings naively strayed far from their panicked mother. It was a relief to see a total of eight nearly full grown cousins of theirs — only a little fluff left on their backs now — swimming confidently about on one of the other pools. The wetlands can be an almost overwhelmingly cute place to be at times.

But of all the birdlife on the reserve at the moment it’s undoubtedly the Canada Geese that are the most charming. They have arrived from all over the region to moult in this relative safe haven. Its wide stretches of open water combined with secluded islands are a perfect location in which to become temporarily flightless. They’re popping up everywhere, like triffids, waving their slender necks, making otherworldly groans and staring an inhuman stare. The fine literary quills from their wings are strewn on the ground and they waddle in their backless dresses up and down the lakeshore.

Such a familiar bird — only the mallard, mute swan and pigeon can realistically compete with it on family fortunes — they are really part of the furniture here. Making a mental list of the birds I’ve seen in a day I am sometimes not sure if I’ve seen any canada geese or not. They are so ubiquitous as to be invisible.

More shame on me. This spring I’ve felt I’ve shared their lives quite intimately. Goslings have grown from tiny, palm of the hand balls of yellow down to almost full sized. On some the black necks and white chinstraps of the adults are almost complete, with only a hazy suggestion of fuzz softening the edges. A few days ago I watched some week old youngsters attempt to wrestle the seeds from the top of a grass stem, a comic herculean battle that both bird and plant, I think, lost. It is hard to fathom how they can grow so fast on a diet consisting mostly of the grass and other vegetation they’re able to snip with their own, at first tiny, beaks. Perhaps the solution to all the world’s energy problems lies in the stomach of a goose.

I imagine they’ve grown used to the daily sight of me as their panicked sprints to the water have become less frantic, the hissed warnings replaced by muffled glottal honks, and their dark, disarming eyes…

I just never paused to notice. 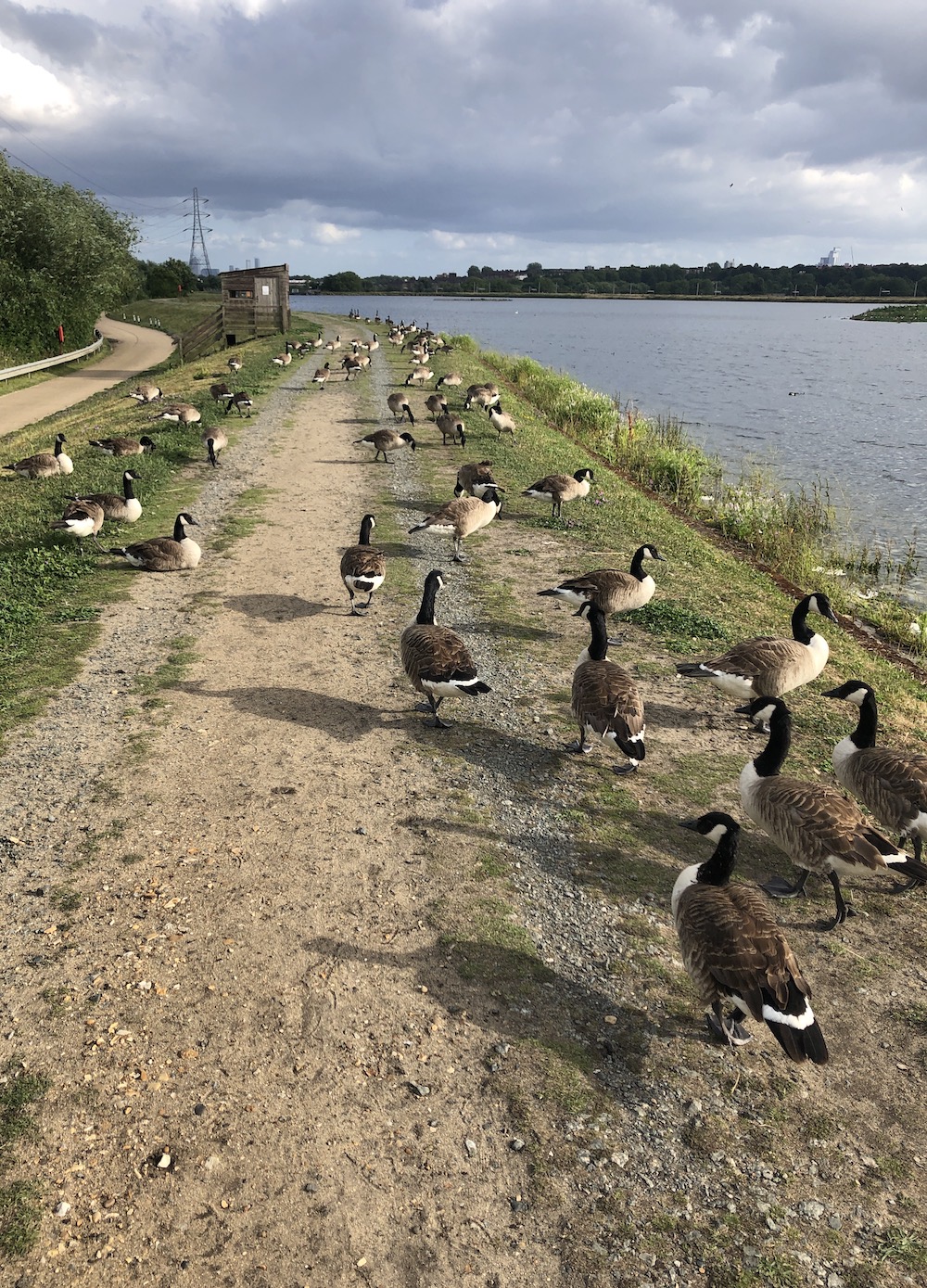