Putting trousers on after a week of shorts feels cold and strange, but I was glad of their comfort today. A heavy, ruffled sky and a stiff breeze meant I was glad to wear long sleeves too.

House martins cavorted at the bottom corner of East Warwick. Swinging across the path like trapeze from time to time, they mainly stayed close to the water, tilting and swivelling as they ploughed slowly upstream. Their white bellies and blue-black bowl-cuts framed dark eyes, both beady and luscious at the same time.

They particularly favoured the strip just beyond the tenacious weeds, which clung to life in between the flooded concrete slabs. The water is very high at the moment — higher, I think, than I’ve ever seen it. London must not be thirsty enough to consume all this rain we’ve been having.

Further along the martins desisted and their place was taken by an army of swifts, even more dedicated to quartering low over the water. Wide, flat, open beaches, when the tide is out and the wind is up, often shed their top skin of sand and let it be whipped into a river. I imagined today’s wind had done the same to the lake, with the most energetic ripples set free to pursue life on the slender black wing. Walking past the geese I saw, in their nape feathers, the dusting of miniature dunes the wind leaves in the lea of ripples. The chunkier necked ones, when bending their necks a certain way to preen, reminded me of seals.

It has been a while since I’ve seen the sea.

The unmanaged banks the other side of the gate were splendid with knapweed. It’s an oddly philistine name for such a pretty little flower. Soon the teasels — spiking and beginning to blush already — will join them in their pinking and purpling. 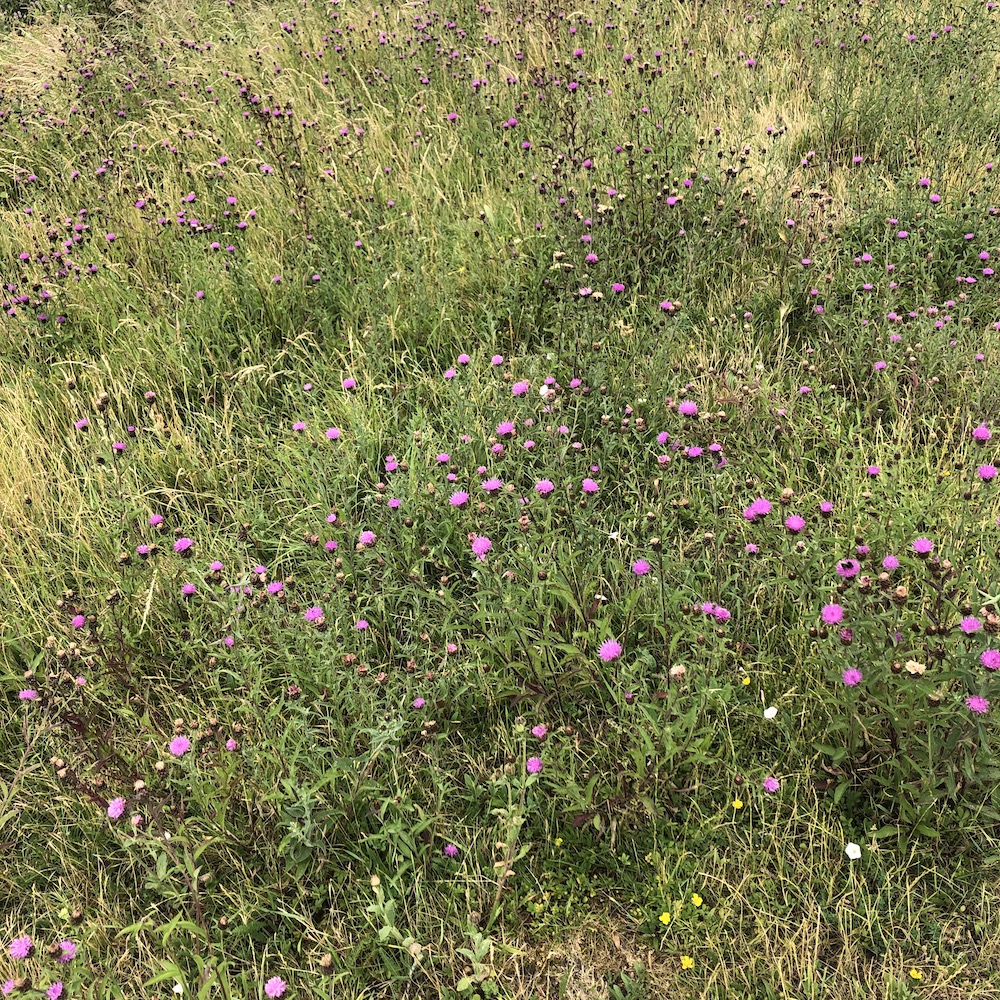 Along the far bank a few usual songbirds lived their lives. A great tit, “che-cheesing” like a shutter on a cheap 1980s camera, worried a shrub, and about ten linnets and a few goldfinch ping-ponged through the air. A bright, pink-breasted male linnet settled on the power line and sang, sounding like a medley of playground taunts (but perhaps sweeter), before falling to earth and attempting to feed on a knapweed flower.

Over the water a sedge warbler and a reed bunting made hard work of journeying from one point on the bank to another. But they are not birds of the breeze. The open air was no place for them today. 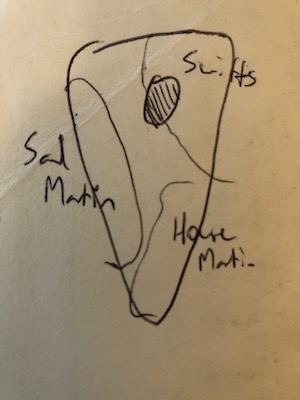 Unlike the Sand Martins that ran up and down this side of the reservoir (the reservoir is almost entirely segregated along tribal lines today). Not as jaunty as a house martin, or as daredevil as a swift, and lacking the swallow’s touch of class, the sand martin is the least memorable of our summer sky chasers. They are also less familiar around man-made or dryer, upland landscapes, so, in my case at least, hold no nostalgia. But they do have their charms.

They are plain brown above and off-white below… but look closely and they wear a slightly darker eyeshadow giving them fierce, a bandit-like expression. Their stubby, barely forked tail, while lacking refinement, gives them the no-nonsense drive of a rocket and their wingbeats, neither languid and elegant like the swallow’s, or jerky and playful like the house martin’s, do nevertheless exhibit a kind of calm, stoic cool. If I were a delivery driver, I’d want a cut-out of one on the side of the van.

Apparently the water level in the overflow channel, which takes any excess flood water quickly down to the Thames, is also high at the moment. A colony of sand martins nest in pipes jutting from its concrete walls, and there is worry that many chicks will have drowned. But, watching the dozens flying over the water today, I formed a hope that some were this year’s young. Quite a few birds travelled in convoys of twos or threes, conversing in their grated chirrup. It’s not easy to age a sand martin, but I fancy that these little troupes, tight as synchronised swimmers, are parents teaching their children the flycatching ropes.

And how exciting it must be to learn to catch flies on the wing. I’m at the age where friend’s are having their first children, so am slightly familiar with how exciting it appears to be to take one or two clumsy steps and be able to see the world from a couple of feet higher up. But imagine emerging from a dark tunnel and jumping into the air to fly!, and then your immediate aim in life being to engage in aerobatic pursuit. I’m no Harry Potter fan, but I think this is equivalent to every sand martin fledgling being asked to be the seeker. I can’t see any birds looking at non-bird children and being quite so thrilled at the prospect of taking a walk.

They continued to flit over the water, eyeing me superciliously as I plodded back to unlock my bike. Riding home, a family of egyptian geese caught my eye, slumbering on the ground. Far less superior and condescending.

But even they nest in trees. 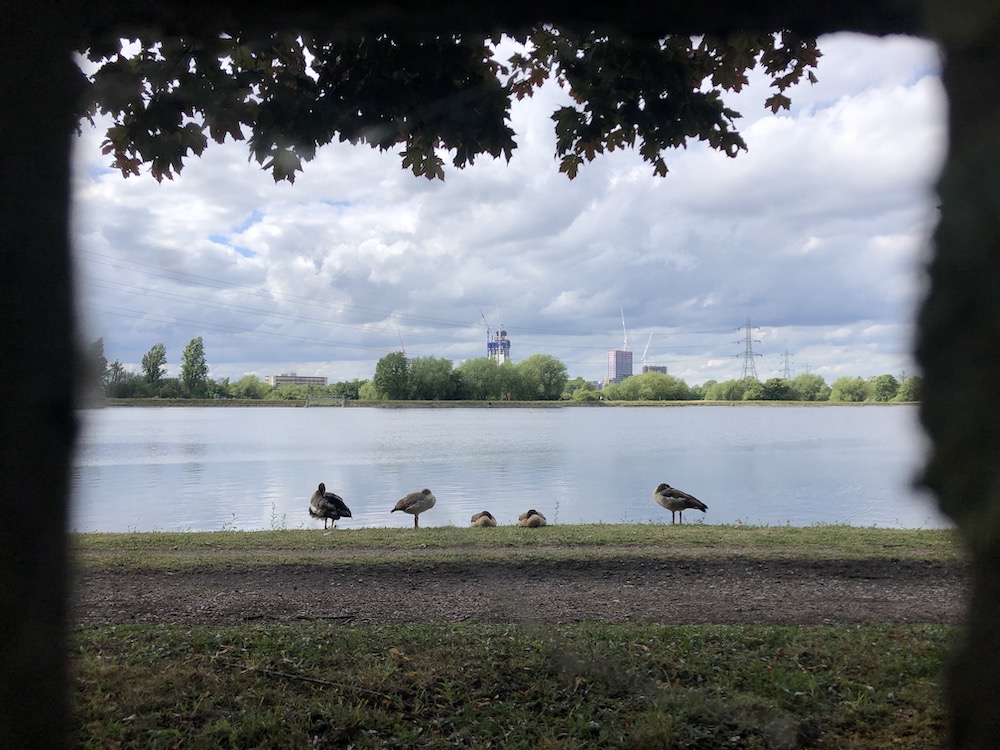