Waking early once more for a wonder around the reserve, I was rewarded with all manner of sights and sounds. A goldfinch bonanza greeted me, with special guest appearances from the young great spotted woodpecker (attempting to chisel its way into one of the bushy galls growing on the willows) and a parakeet parachuting down in carnival colours. Even the humble coot, backlit and running agressively across the water, looked like a scene from an 80s music video.

Plenty of aerobatic excitement from the terns and gulls too, and a newly fledged tern — most likely a visitor from the Ponder’s End colony — sat on the reservoir banks whining to be fed, which it duly was when a parent deposited a little fish in its unrefined gob. They look so funny when they’re young, stocky shouldered, scribble-winged, altogether badly drawn and out of proportion. The kind of tern fan art that gets sketched in the inside cover of the exercise books of seabird teenagers.

And that, ladies and gentlemen, is where today’s Walthamstow story ends. Because today I treated myself to a day off work and headed out into the Essex countryside on my bike instead. And there is much to tell.

I find it remarkable that within ten minutes ride I can be at Gilbert’s slade, a respectable glade in the midst of a mixture of oak and hornbeam trees. Another half an hour, a few miles up a gradual incline, and I’m in the heart of Epping Forest (by which I, of course, mean the biker’s cafe). Then it’s only another twenty minutes to the other side of the M25 (which very considerately passes through a long tunnel), and out into the open Essex countryside.

And it’s quite the tonic. The first time I’ve properly been out of the city since March. Get me in a strident mood and you may find I have lots to say about the damaging effects of monoculture farming, dividing the countryside into vast fields of a single crop at the expense of wildlife and, counterintitively, the long-term productivity of the soil. Green deserts, they’re known as.

But roll me down a gentle hill with a blue sea of flax to my left and wheat to my right, and put just one (as opposed to the dozens of yesteryear) Yellowhammer in a hedge to serenade me with its a little bit of bread and no cheeeeeeese song, and all is forgiven. I thank my lucky buntings that the farmers found it in their hearts to lay such perfection in my path. 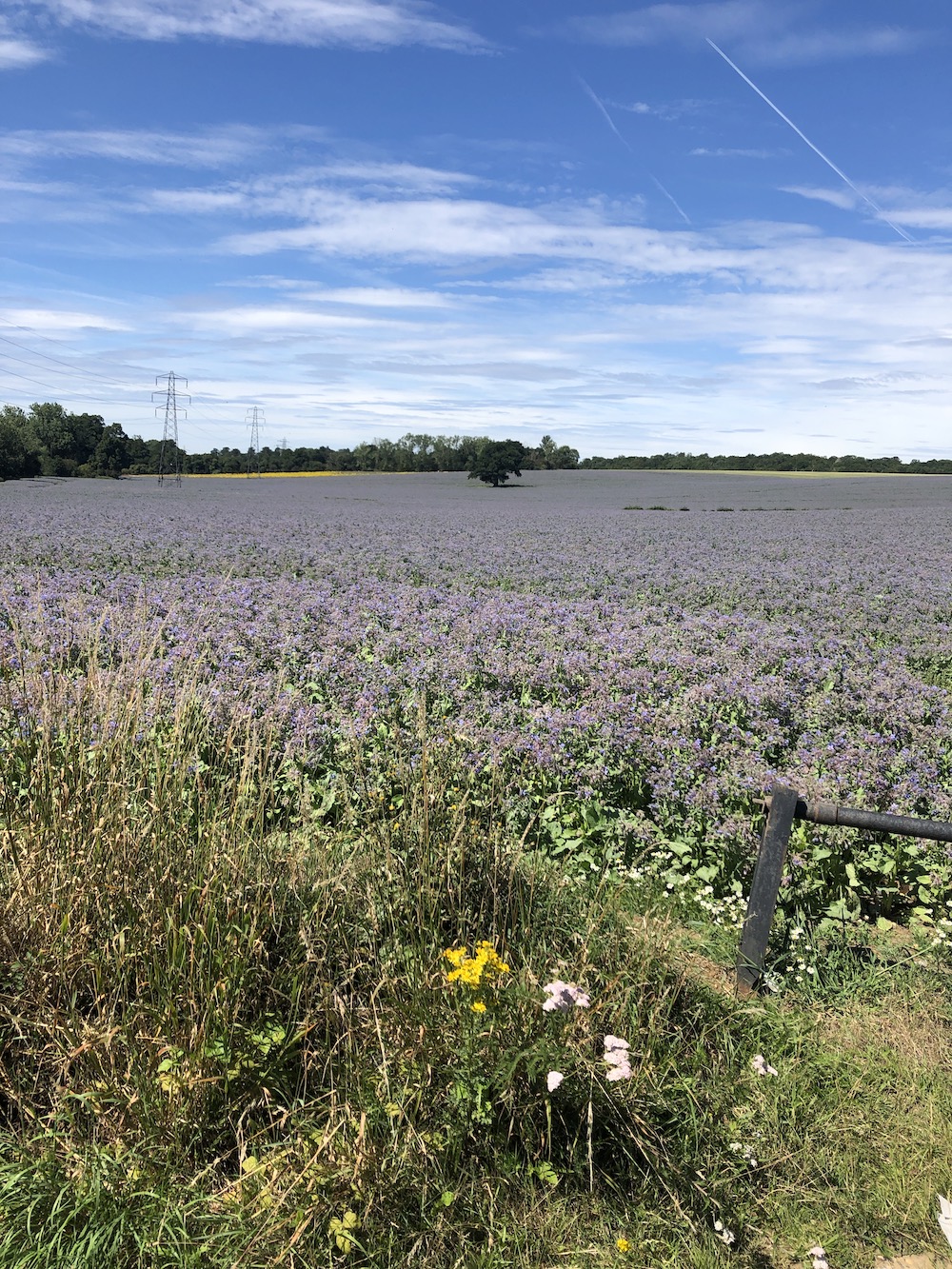 The yellowhammer was the first contender to be today’s title bird. The second brightest bird in Britain (after the yellow wagtail), in the right light they shine like fiery beacons from the hedges, spanish yellow below with a rich, streaky tan back. I used to see and hear them on my walks to sixth form college when I was young, but I doubt they can still be found there now; their population, like that of so many farmland birds, is plummetting.

But today it was pleasant to hear good numbers of them along a two or three mile stretch of fields. By the vagaries of the London Natural History Society, technically this means I have now added yellowhammer to my London list. Unlike many finch-like farmland birds, yellowhammers seem reluctant to venture any further into London, even during cold spells. But the definition of London used by the LNHS is a circle of radius 20 miles centred at St. Paul’s Cathedral, which means the fields I observed them in lie well within the city limits.

Continuing on past that first birding highlight I descended to the valley floor, and then climbed the other side to an area known as Epping Upland, and then on to an area of open access land known as Nazeingwood Common. These names come to me via an Ordnace Survey map I invested in. Years ago when on a roadtrip through Sweden, and holding just as true on a bike in Essex, I learned that map apps, in their necessary drive to cut out clutter and “optimise teh user journey”, are enemies of serendipity. Without the paper map there’s no way I would have taken today’s off the beaten track detour down an alley behind a pub, emerging out onto the common. 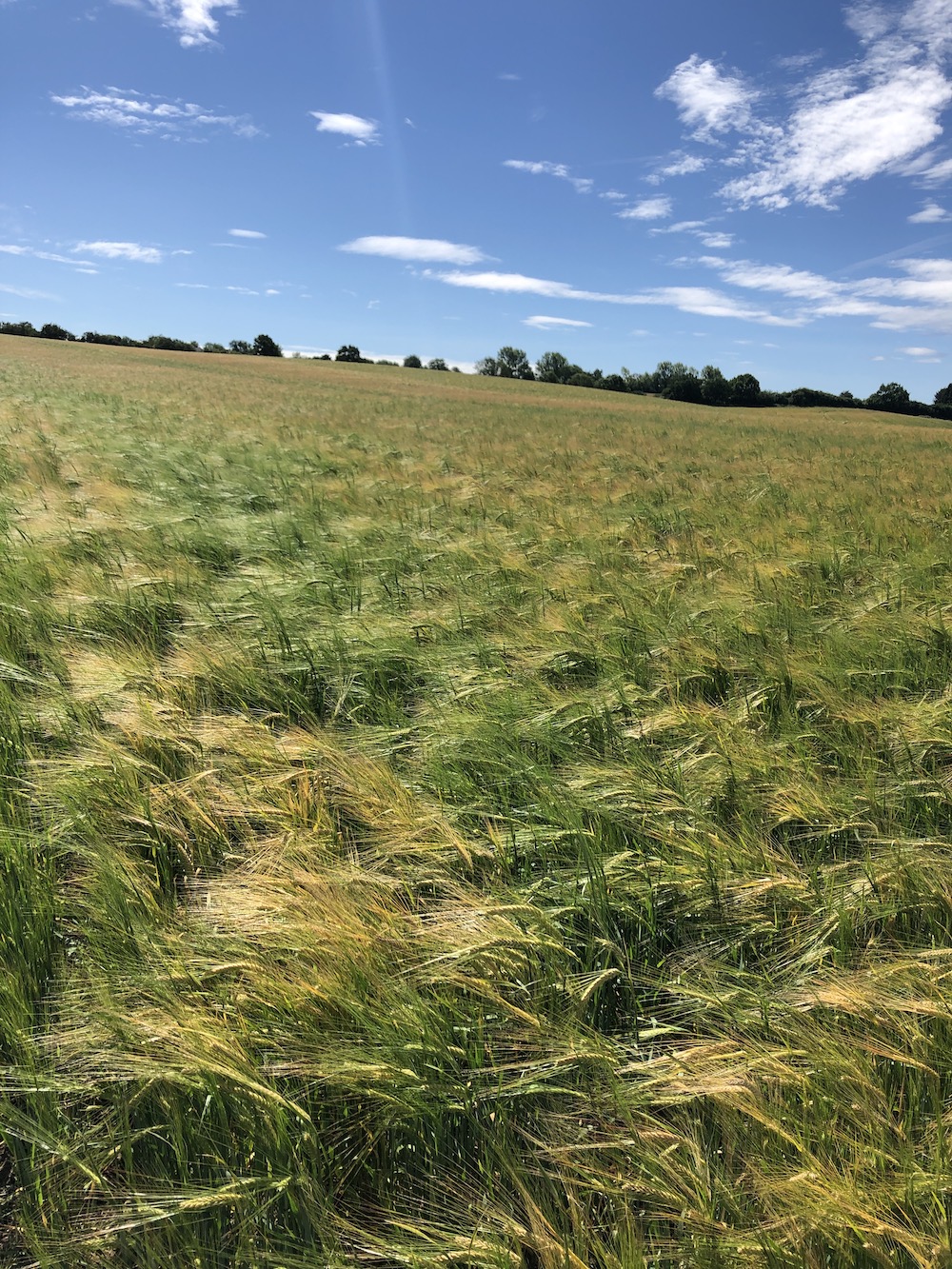 Not that Nazeingwood Common deserves the name. It’s as perfect an example of intensively farmed arable land as you could hope to find, covered with absurdly swollen, thoroughbred wheat. The right to wander unrestricted across the open access fields clearly hasn’t been exercised of late. Nevertheless, it was home to the most yellowhammers I saw today, gave me a fun glimpse of a red-legged partridge fleeing my bike’s rattling over the furrowed ground and, best of all, delivered a Skylark to sermonise from on high on the joys of country living.

Skylarks are surprisingly big — closer to a starling than a sparrow — but as they are normally seen suspended way up in the sky on tremulous wings, they do usually appear to be very small, delicate creatures. Despite broadcasting their presence with a breathless, unending stream of garbled honey notes, they can still be fiendishly difficult to find. Even though they are not much to look at — a streaky, sandy brown thing with the hint of a crest on its head — and their undoubted selling point is their song, there’s not a birdwatcher alive who can be satisfied without finding the bird in their binoculars. That’s just the way it is. Fortunately today’s gave itself away without much of a fight, so I could go back to enjoying the music.

Having crossed the common, and the day still relatively unadvanced in both time and heat, I spun the map again and ended up (after a yomp up a steep muddy bridleway — no fun on a road bike) in a narrow strip of woodland atop a broad ridge. I sat under the ship’s-timber-straight oaks to sate my thirst and catch my breath, and was joined by a roving tit flock.

All human activities have their arcane nomencalature, and birdwatching is no different. Some birds have their behaviour habitually referred to using very specific verbs. To rove means to:

Which could apply to any number of birds, but for some reason in ornithology it is used almost exclusively to refer to flocks of tits — sometimes accompabied by related birds such as finches or warblers — foraging for food in the woods from late summer through to late winter.

Naming curiosities aside, they are a delight to watch. Blue tits and long-tailed tits in particular are consumate acrobats and will dangle upside down from the flimsiest of twigs or loosely attached tree accoutrements (or treecoutrements) in search of some insect to devour. Today they were joined by three or four Treecreepers, probably a family, working their way from tree to tree.

Treecreepers land low down on a tree trunk and then climb vertically up it, travelling so quickly and so seemingly attached to the bark that (stretching the imagination, admittedly) it’s as if they are miniature, gravity-defying seals, belly-flopping their way upwards towards some arboreal fishy treat.

I continued along the bridleway, which was clearly much-used by horses (much to the disquiet of my poor, decidedly not off-road cycling contraption). Arriving at a natural location to check the map I waited a while to try to find the buzzard noisily mewing overhead, but was once again entranced by another retinue of rovers flitting through the impressive stand of oaks. I saw the back end of a bird sticking out from behind a twisted, bleached branch of a dead tree, then another landed next to it, the first dropped an vibrated its wings to beg and, presumably, a meal was transferred. But all, aside from the tail, rump and wingtips of the young bird, obscured from view.

Then both birds flew to new perches and revealed themselves to be Spotted flycatchers, big-eyed, dull-feathered mannequins of the woodland edge. The adult made little sallies (another verb-bird pairing) out to snatch insects in mid air, its surprisingly broad beak and long, almost swallow-like wings giving it the agility and chops to make it look easy hundreds of times a day. They taught Obama everything he knows about catching flies. edit - I’ve just found out they barely breed in “London” any more, so finding a hitherto unknown breeding site is quite exciting.

And down, up and down the clay tracks — so much so I think my cosseted, metropolitan wheels were starting to enjoy it — to arrive, finally, back in the familiar lea valley of this blog’s usual tales. I checked its usual spot at Fisher’s Green for my favourite fox, then pedalled south with tiring legs. The tarmaced track through the Cheshunt segment of the Lea Country Park was, bizarrely, festooned with lots of small birds — even slavishly tree-dwelling ones, such as tits — creeping about on the ground. Most unusual to see. I guessed they might be hoovering up the remnants of yesterday’s flying ant day spectacular.

One final detour (no map needed this time; back on home turf) around Hall Marsh. These marshy fields surrounding a shallow, reedy pool can be good for geese and snipe in winter. In the early weeks of lockdown I came across some lapwings here — perhaps a sign that they breed. But now that summer is in full swing it’s difficult to see anything as the impressive variety of waterside plants have grown to block views from most vantage points.

I did however take the trouble to visit them all and at the very last one was able to get a clear-ish view of the water and a muddy island set in the middle of it. Sat on a bench in a half-enclosed hide I was happy to rest my legs and so, despite the lack of any birds, remained seated and continued to scan through my binoculars. After a few minutes I was rewarded with the semi-obscured sight of a wader bobbing behind some brush-like vegetation.

After a little more patient waiting it stepped further into the open, showing that the faded streaks on its throat ended at a line level with the bend in its folded wings, and once or twice it stretched its neck upwards, achieving a racehorse-like elan that its cousin, the common sandpiper, woudl look rdiculous trying to imitate. Finally, as if giving more and more obvious clues in a television phone-in quiz, it stretched its wings to show the black undersides that can make it look like a giant house martin in flight (I was sceptical of this mnemonic until, earlier this spring, I actually mistook one for an early house martin).

Quite satisfied that it had been — to use the parlance of the day — “seen”, it swam across to the island and promptly sat down for a nap. No sooner had it done so than another hove into obstructed view and I waited another five minutes for it to swim across for a nap too before I was completely convinced that it wasn’t the far rarer wood sandpiper.

Wishful thinking. Very much in keeping with the mood of the day. 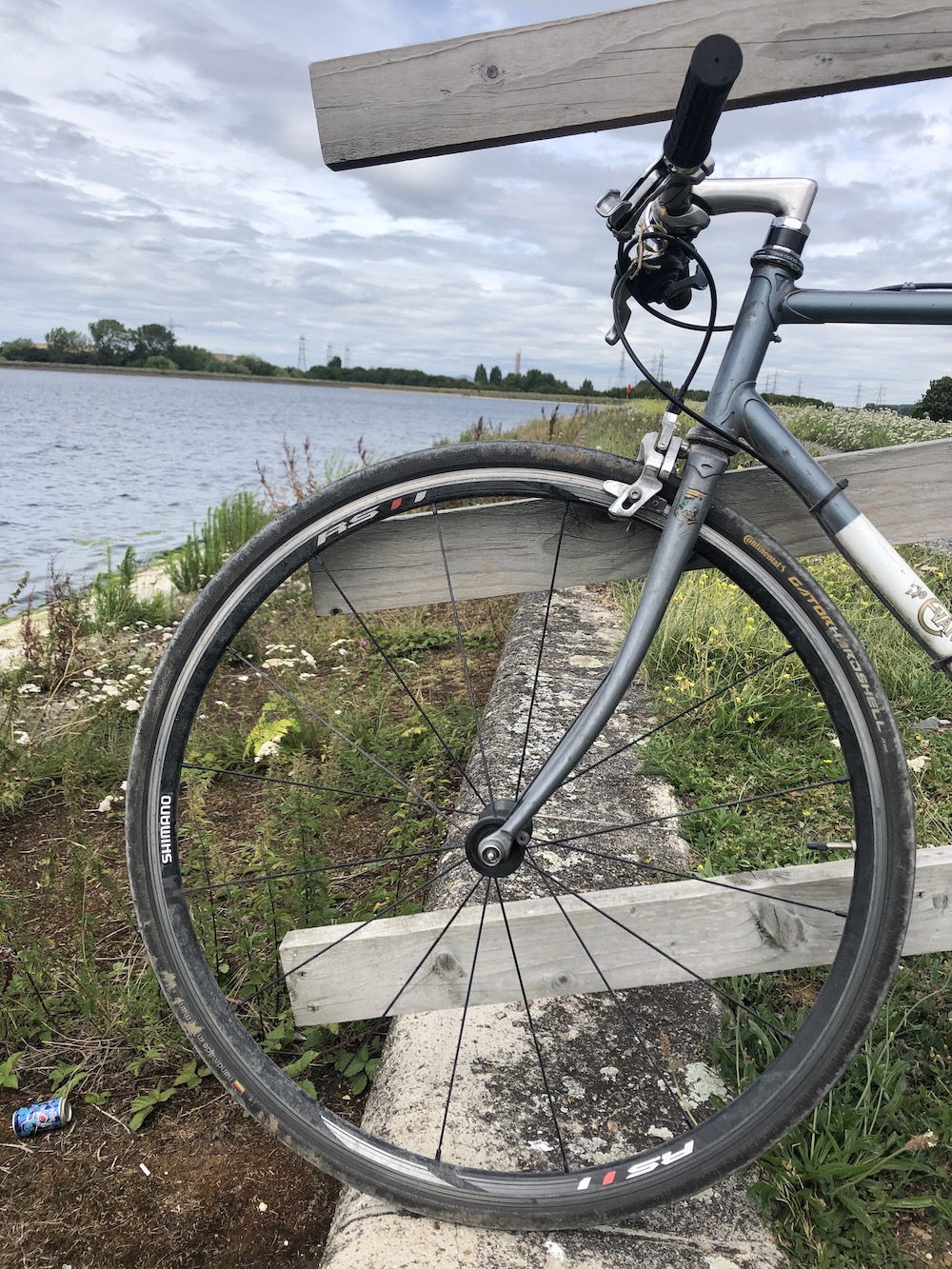