It’s both a pleasure and a pain to have a target bird. Like someone on a European city break, having a “must see” list adds a sense of purpose and urgency, but if done right, doesn’t get in the way of serendipitous discoveries. You can visit the famous renaissance chapel and watch the locals play petanque in a shaded, off the beaten track square you stumbled across while investigating an ill-fated shortcut. Today at the reserve my target birds gave me both the tourist highlights and a dose of rustic, seasonal charm.

From now until September it pays to take a leisurely walk along the more arboreal stretches of pathway, paying particular attention to the two wooded peninsulas either side of the ismuth joining reservoirs 2 and 3. The first item on today’s tourist map was exactly here — a spotted flycatcher Dave had found earlier in the day, hawking for flies in the young trees beneath the electricity pylon that dominates this part of the reserve.

In the sheltered clearing around the pylon’s legs, hemmed in by a broken circle of trees and bushes up to five or six metres tall, flies dusted the air. As well as the flycatcher, its big dark eye and chopsticks beak perfectly suited to the task, a host of other birds clumsily aped its perch-swoop-perch tactic to take advantage of the supper feast. Chiffchaffs and blue tits were no surprise to see darting about after the flies, but even a chaffinch with its seed-eating bill had a go, and a number of wrens rose up from the brambles to join the fun.

Further down the path I was distracted from the bucket list by a much larger gathering of songbirds in the trees between the next pylon along and the coppermill stream. Tits of all three common species, chiffchaffs and goldfinches galore and a family or two of chaffinches — I watched one youngster messily force fed a large fly — made up the bulk of the flock, but song thrushes, blackbirds and starlings added variety, and a reed bunting called wistfully from its hidden perch next to the water, upon whose duckweed and lilypad greened calm a pair of coots were amorously building a nest. For a short while a woodpecker with its spiky tail thought it advisable to join the woodpigeon who sat stock still on one of the pylon’s crossbars, before descending to a far more realistic tree to continue its noisy exploratory boring. 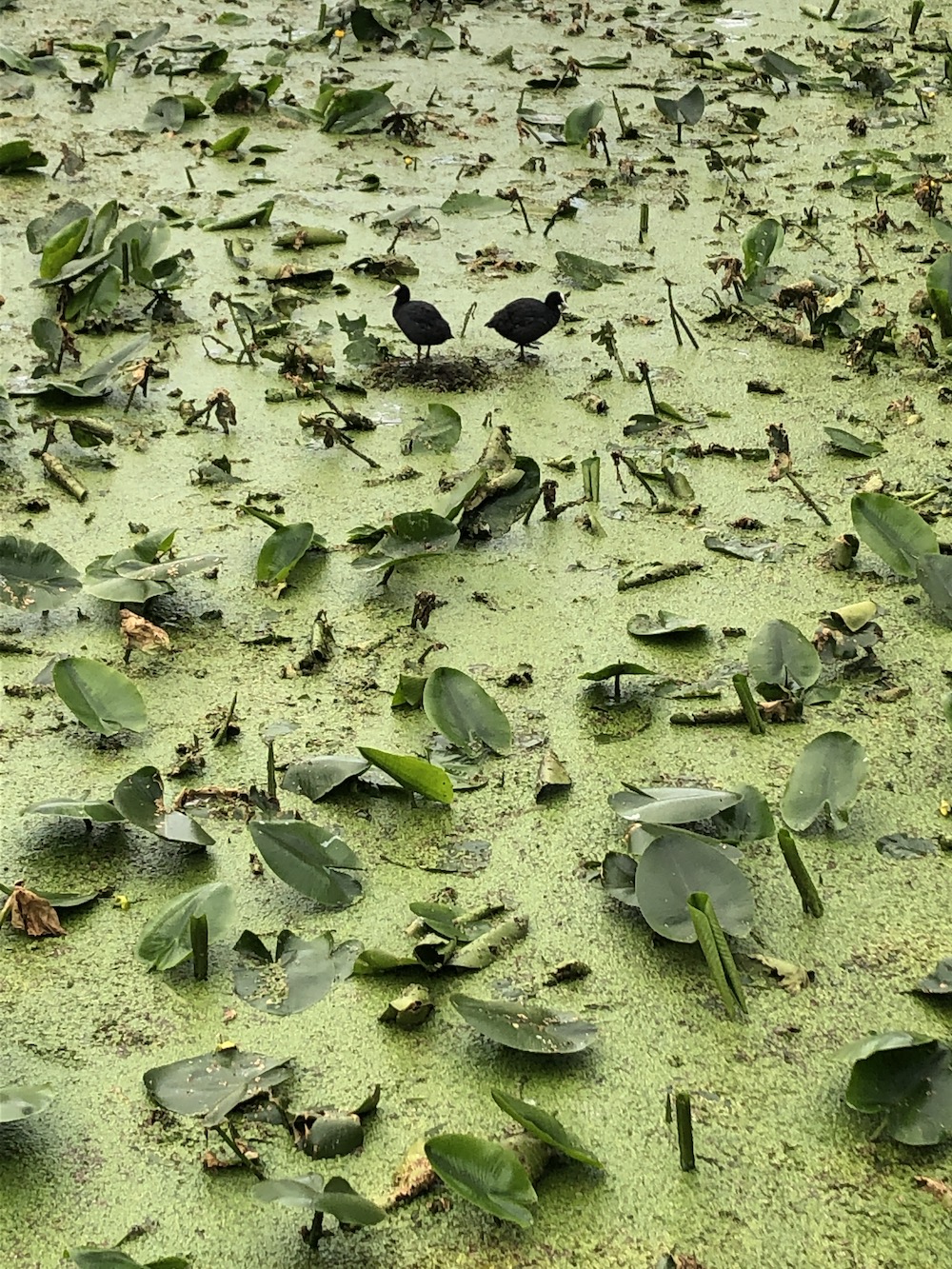 Back on the tourist trail, I was after the juvenile Little ringed plover that’s been lurking about since friday, but had so far managed to elude me. Not a new bird for the year — one of the opening salvos of the spring migration season was my finding a little ringed plover and a few sand martins gracing East Warwick in early March — but a nice bird for the blog, and dainty, characterful things at any time.

Their larger cousin, the ringed plover, was a common sight along the North Wales beaches in my youth, but little ringed plovers are one of those birds that has only expanded its range northward in recent decades, perhaps driven by global warming. In my teens they had started breeding at the Conwy reserve, which is where I saw my first ever. Further south they’re a little more common, but still officially rare and protected. Last year they showed up at the reservoirs throughout the summer, suggesting they bred in some secluded spot nearby. But this year they’ve bookended the breeding season months, with adults appearing up to early May, and this one juvenile showing up in mid July. Breeding further up the valley, I imagine, this year.

It didn’t take me long to find today’s bird — a relief after failing to find it for four days in a row. An avuncular white-bearded fisherman asked if I’d seen anything interesting. I told him about the flycatcher and said I was poff down the causeway in search of a plover. He wished me luck.

Maybe he’s charmed, or maybe my time had come, but either way, the plover didn’t put up much resistance. A few steps after sidling around the edge of the ineffective barrier to the public I saw it standing, bobbing nervously, on the carpet of dried algae at the water’s edge.

It’s legs are so slender, like the drainpipe jeaned legs of the decade past’s Shoreditch hipsters, and often with one leg held bent at the knee, with swooning poise. This look somehow pervades the juvenile’s entire body; slightly scaly faun back, cap and neckerchief, and a faint cream eye ring in place of oversize granny shades. Far cooler than the adults which, with black collars and striking yellow monacles, are a bit try-hard if you ask me.

It got nervous and flew around me, back to where the fisherman’s line lassooed back and too on its mission to put a tempting needlework fly in some trout’s path. I climbed back around the fence — more cautiously this time — and sat down on one of the galvanized steel platforms of indeterminate purpose to watch it scamper, tilt and peck along the strandline. Ten minutes of my life I’ll never get back, but I think I can live with that. As I walked away a trout jumped clear out of the water. I wondered if our fisherman’s luck would extend to his own fortunes.

Wondering back along East Warwick a recently fledged tern, wings of roughly cut paper rather than the grown-ups’ delicately fringed lace, circled noisily. It hadn’t quite figured out how to tuck its legs in yet and they both dangled like a set of stabilisers on a child’s bike. It may well have been its maiden flight — its constant squeals and quartering of the skies around the lakeside willows were reminiscent of a toddler’s sense of liberty and wonder at learning to walk. Seeing the world from a wonderous perspective a few feet higher than the one they’d been stuck in for the first episode of their life.

And giggling with glee 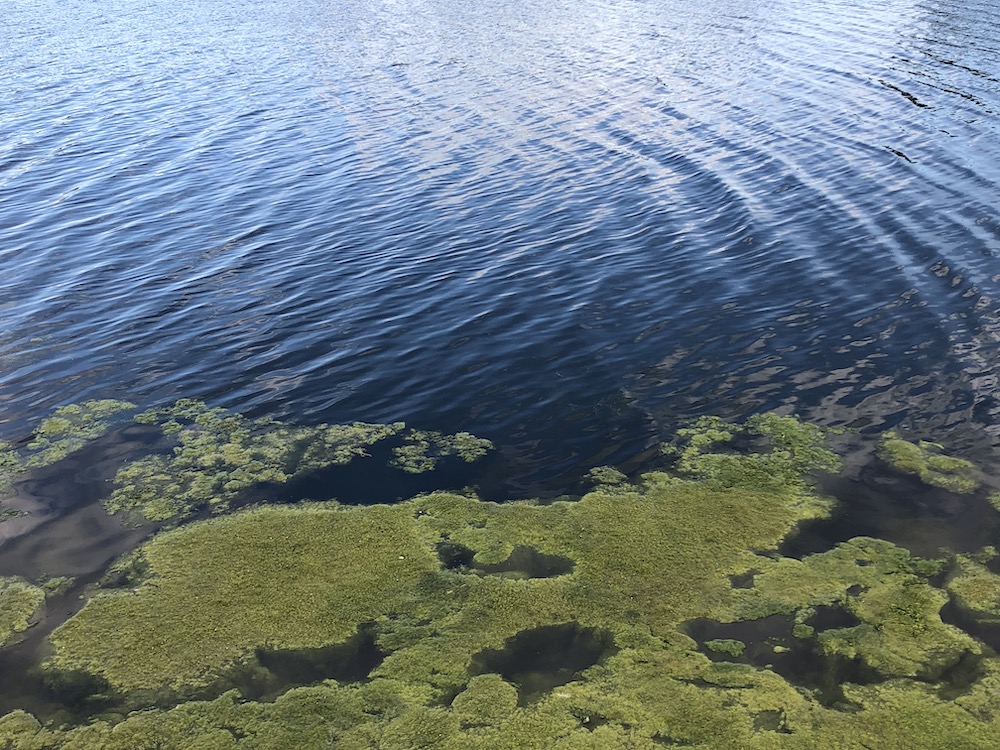