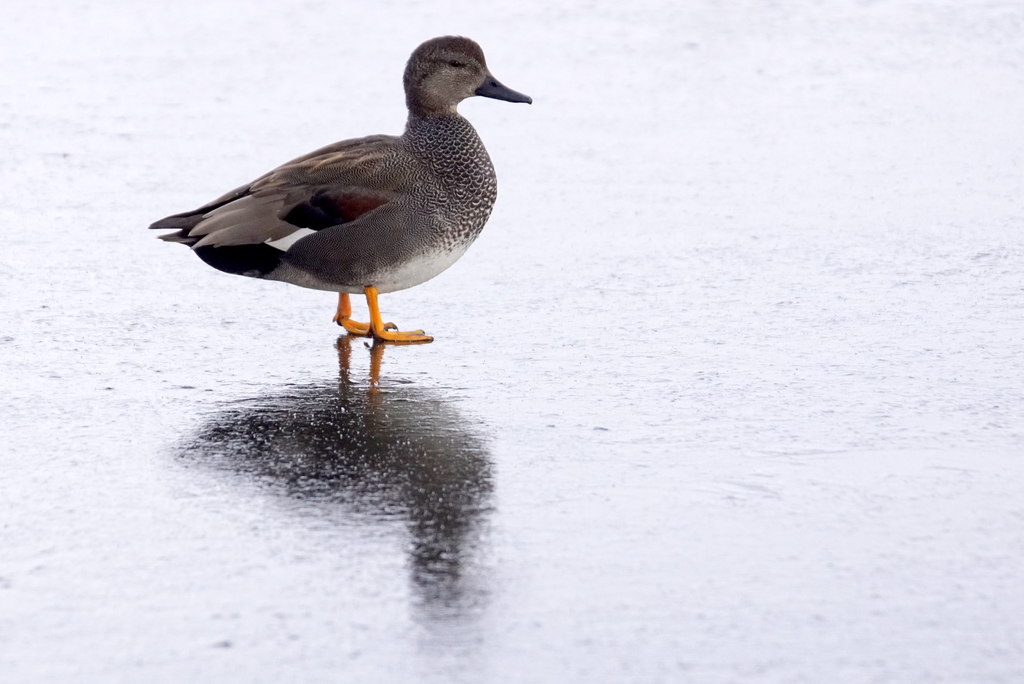 Morning, fresh and youthful. A cygnet shakes a leg to catch the sun. The white mallard shows muddy undertones in the first drab days of her moult. All nine of her ducklings are almost grown up and it is time to think of herself again for a change.

Evening, forgetful and weary, deposits its drizzle from a steely-black wash. And sends a black-headed gull to hoarsely ward me off the colony. Or is it merely saying hello — I don’t speak gull. A ragged looking tern heads away to fish, pulling at the air with its well-worn wings.

Morning, so sunny and calm, has dropped last week’s wind. Tufted ducks dot the water and, without waves for scale, could be sleeping geese. A male Gadwall, an elegant grey beast even in the height of its glamour, takes its perfectly proportioned off-season outfit for a pootle around the island. Finely barred in two shades of grey, and with chestnut and white panels on its wing, its tastefully evolved round head tops off a masterclass in understated elegance. Imagine Audrey Hepburn in a film set on a country shooting estate. It skirts around the daunting but childish and relaxed whitish bulk of the resident young great black-backed gull. There is room enough for both on the windless, boring, blue-mirror lake. Under the surface a sub-aqua, algae-lawned atlantis of rubbish, rocks and deadwood shows off its tantalising vistas. 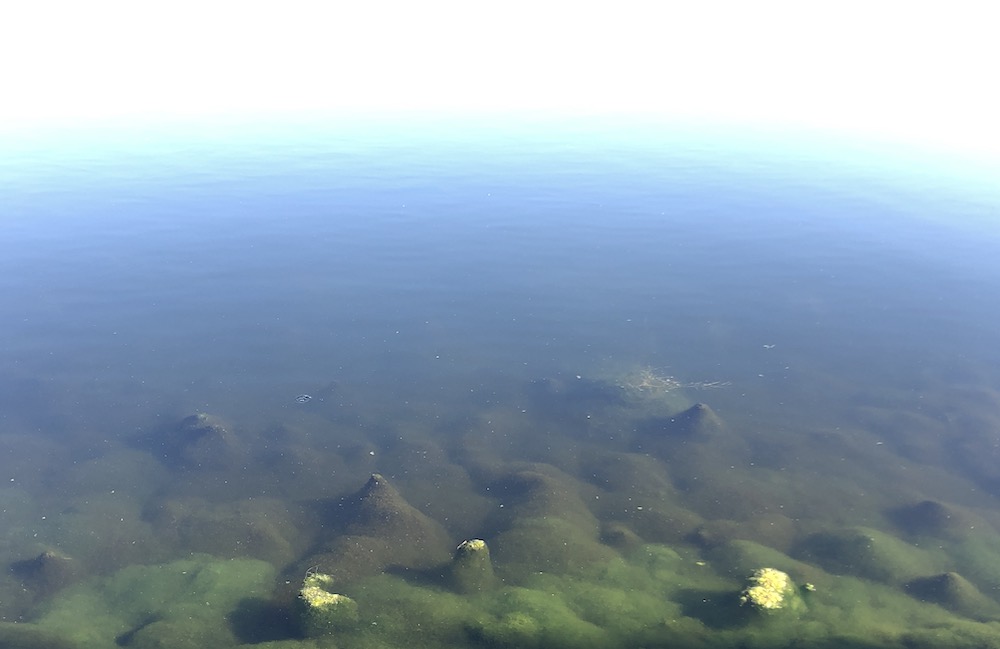 Evening, the ducks stay damp even through the windows of respite from the pointless rain. Pochards and shelducks have gathered in creches and the young form almost the full sequence of the ascent of duck. The young pochards, already lengthening into the characterisitic submarine shape, get themselves, quite literally, in line. The shelducks are a more unruly bunch and, unlike their more refined child-minders/parents, wonder hither and thither, and take it in turns to dive beneath the surface. They are already taking on the adults’ dark-headed, white-bodied looks (so hard to picture when ust a week younger), and soon they will grow out of this diving fad too, and stick to promenading on coastal mudflats instead, like good society shelducks. A greylag goose sneezes and snorts. Even they, apparently, sometimes have trouble with water going down the wrong way.

Morning, and two comma butterlies with beautiful rusty fractal wings accompany a peacock butterfly on the sunsoaked buddleia. A stock dove sings from the ivy, and its milkshake brings all the birds to the yard. First an olive-leaf green chiffchaff trots out onto a sunlit treestump, and nearby a reed warbler tries to fight a blue tit so young it seems stunned by the imposition and does nothing. In the woodpile behind the fisherman’s hut — which will soon be the focus of early autumn birdwatching — a young dunnock, with a pale, well-marked head, sits preening with its fluffed-up back feathers to the sun. In the upper branches of a nearby bush three fresh-faced, fresh-out-the-nest reed warblers clamber around each other for the best spot in the sun (but had better beware as their white bellies stand out a mile away). Their buff grey foreheads have behind them the unwordly, innocent minds who know nothing but a woven cup of grass and a regularly appearing beak bringing insects.

Evening, as the rain drips down again a herring gull cries mournfully from the island. It inspires others to join the sing-song and soon teh pub is transformed into a chorus of back-slapping and cheers-ing, and now the night is young. Heavy, hessian mats of flies hang in the air, in celebration of the humid tranquility, and beg to be breathed. An army of sand martins descend and cavort like puppies as they sweep up the moist airborne feast. Still arranged in little family groups, they fly in 2’s, 3’s, 4’s and 5’s, swarming around the willow tree citadel. They make aborted attempts to settle in the treetops, violently refilling the air with their dense activity on deciding that the hour for bed has not yet come. I leave them circling an oak tree covered island as a murmuration of starling parachute in to roost.

Morning, and a young reed bunting begs with fluttered wings from its marginally more well-marked mother. The young wren is sounding almost professional now. A robin squeezes an infinite number of tic calls into a single trill, and a green woodpecker escapes up the path ahead of me.

Evening, a male reed bunting finds its song and sings it. Goldfinches pull up the blinds on their wild rosebush bedroom, and blackbirds serenade the greenery in their droves. Two chiffchaffs flutter up to investigate the opportunities a pylon has to offer, where our young female green woodpecker greets them with a soft Chieu Chieu.

Morning, the geese, tufted ducks and mallards at the water’s edge next to the last stretch of path are rudely disturbed into the water, and the multitud of bow waves from so many simultaneously launched waterfowl causes a beautiful diffraction grid to shimmer on the surface. The first waves it has seen today.

Evening, a peregrine, mechanically winged and dramatic, surprises no bird and flies away empty taloned to screech its dismay from its third favourite pylon. Morning, fresh as a daisy, rearing to go 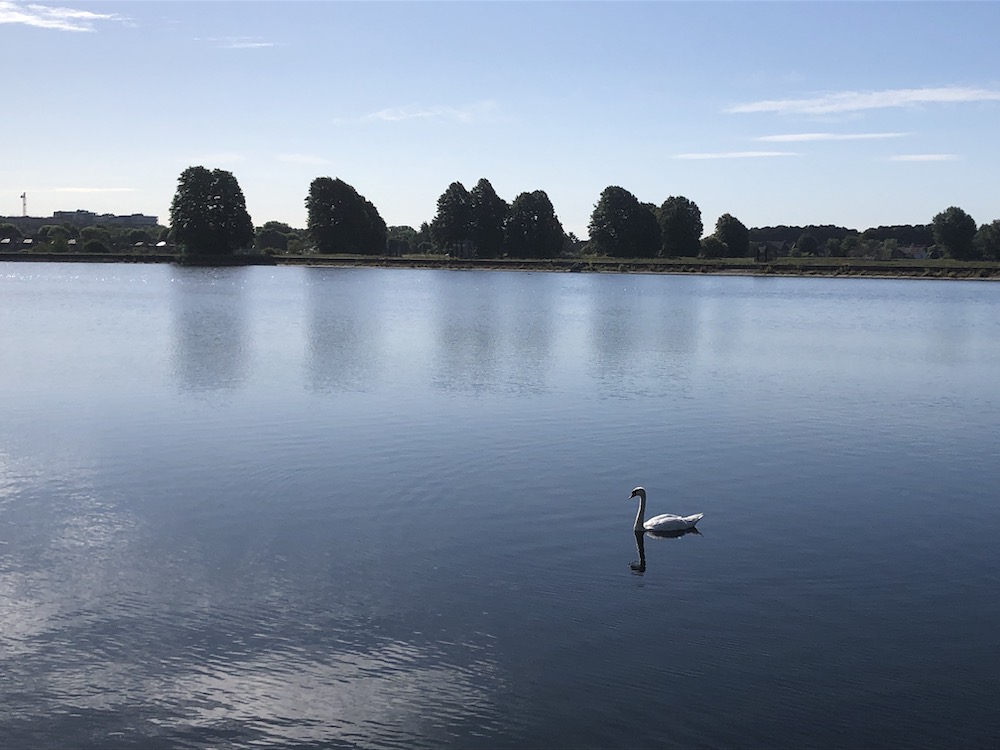