Another glorious sunny day saw me spend my lunch break at the reservoirs, enjoying and suffering from the sun in equal measure.

The reservoirs each have their own personality, and I’ll be sure to introduce you to each one as the months progress. These man-made drinking water lagoons are important characters in their own right, and this blog wouldn’t be complete without introducing you to them. Unless I have three or more hours to spare I don’t have time to visit each one, so must choose. The choice is a reflection of both my mood and theirs. Sometimes I will leave the flat with one in mind, and on other days I’ll see how I feel when I arrive.

Today was always going to be a Lockwood day. 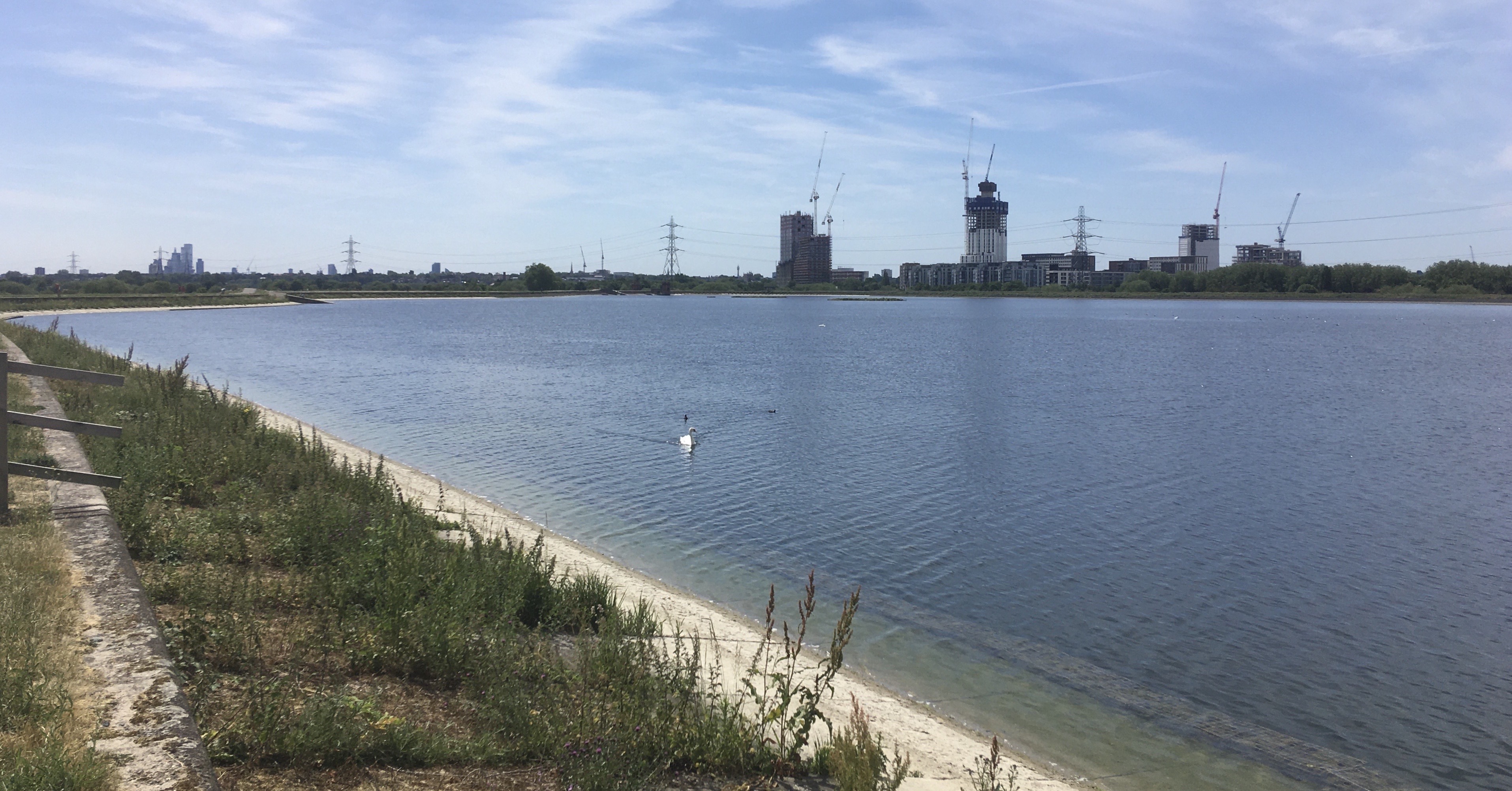 Lockwood Reservoir is the colossus of the Walthamstow Wetlands reserve. Three quarters of a mile end to end, a quarter of a mile wide and with imposing grass-covered concrete embankments lifting it several meters above its siblings, it’s the white whale of my little corner of the Lee Valley.

Be it a hot summer’s day or a blustery winter morning, it takes commitment to traipse around its circumference. A fruitless hour spent shielding one’s eyes from the sun’s glare with nothing more to show for it than a few gulls and some angry coots is the epitome of the mid-summer birdwatching doldrums. And yet today, that’s where the mood, in no uncertain terms, took me. Maybe it’s guilt at having neglected to visit it lately, but more likely the birdwatcher’s unquenchable thirst for finding something interesting in the spot where no-one else is looking.

Climbing the gravel track up to the permit-holders path this walk had all the hallmarks of a disappointing haul. The air was still and very few birds made a sound. The swifts that are often to be seen wheeling overhead were absent too.

I heard a Whitethroat — a summer migrant with a gravelly voice and an air of always having been intruded upon — burst briefly into song, but before I could ‘record it for the blog’ it had slipped into shouting a series of nasal alarm calls. A dunnock, one of our resident scratchy songsters, piped up and I marvelled at how both songs could be described as ‘scratchy and tuneless’, and yet sound nothing like one another. Mind you, all Irish music sounded the same to me until I learned to play, so it’s all about training the ear.

Arriving at the circumnavigating service track I was delighted to see the path lined with a bank of purple flowers. Amazing what a week of sunshine can deliver. A little way down the path a fisherman sat amid the blooms, looking dazed and shell-shocked from the day’s heat.

A coot, probably my least favourite bird (more on that when it has its five minutes in the limelight), paddled busily in the shallows, showing off its extraordinary feet through the crystal clear water. I almost forgot how much contempt I hold them in, but still hoped to avoid descending to writing about them as early as day two of the blog.

And then it arrived, the second boring bird of the summer - a Peregrine Falcon.

It really isn’t in the spirit of this project to begin with not one but two birds of prey. Birds of prey are the epitome of an un-boring bird. Even the relatively common buzzard or kestrel draw gasps of awe from time-worn birdwatchers, and the peregrine is an especially legendary specimen.

Yesterday I forgot to say that the Osprey is most notable for its habit of diving into lakes to catch fish, something few other raptors do, and no others do so spectacularly. The Peregrine is also the master of a remarkable feat of flying, reaching the highest speeds of any creature on the planet when it dives — or stoops — from astonishing heights at up to 200mph to catch its prey in mid air, usually a pigeon or similarly sized bird. (For an impression of what that’s like watch this, but not for the faint-hearted).

In level flight they are relatively unassuming, flickering their pointed wings with speed and economy, but propelling themselves forward with the unwavering commitment of an oncoming asteroid. Today one flew low over my head and directly up to one of its favoured perches on a pylon overlooking Lockwood.

They breed on a local tower block — rearing a very noisy youngster last year — and are not an unusual sight in the area. But it’s possible to go months without seeing one or hearing their raucous screeches. Recently, thanks to the increased frequency of my lockdown birdwatching, I’ve had some beautiful peregrine moments. I watched a pair’s courtship display flight in March, had a pigeon escape a near death experience right above my head — close enough to hear, and almost to feel the rush of air — and, best of all, in April watched one glide over my shoulder to land on the concrete bank of Lockwood and have a bath, to the bemusement of a collective of concerned waterbirds.

In today’s bright sunlight I saw yet another facet of this bird’s charms. Sat near the top of the pylon its black hood, pencil grey back, barred white front and coral yellow legs made it look like the archetype for some ancient royal house’s coat of arms. Looking far more the dandy than its usual dark grey silhouette gives the lie to. These bright June days are proving to be a joy for the birdwatching aesthete’s eye.

“It looks quite slim,” I thought, “probably a tiercel”.

The tiercel, I learned from one of my favourite books, is the name for the male, while the female is known as a falcon; surprising in our patriarchal world that the most widely used term is the feminine. The female of many birds of prey is often larger, so perhaps their matriarchal influence rubbed off on our nomenclaturists.

That book, The Peregrine by J.A. Baker, is an obsessive account of one man’s fascination with the peregrines that hunt over his local marshes. It’s bleak — though he does not mention it, he was in constant pain due to chronic illness during its writing —, stark and brutal, but contains the most beautiful, lyrical writing I’ve ever read outside of a Dylan Thomas work.

Through the frosted window-pane at sunrise I saw bullfinches feeding in the apple trees, the bright fire of their breasts glowing, then the sullen red smoke of the sun breathing from the eastern rim.

But you’ll stay to read to the end of this blog anyway, won’t you? Otherwise you won’t get to hear me tell you about the two teenage canada goslings I watched swimming behind their parents as they passed beneath the pylon, oblivious to the killer above them. Behind me, someone walking along the canal sang Bohemian Rhapsody badly.

And that coot, as did I, continued on its boring journey around the lake.