Another day of bully-boy rain clouds intimidating the skies above London. A morning of full rain, and later merely the empty threat of it. By the time I left the house at about 4 the sun scampered in and out when opportunity allowed, like a mouse raiding a crumb-laden kitchen.

I’d been at the reservoirs for upwards of an hour and was sat in front of a bush waiting again. The timorous sun had breathed enough warmth to give the grass some superficial dryness, but on sitting I was plagued by the trick nature likes to play — dry grass, wet arse.

Still, it was quite pleasant to sit on the banks of West Warwick, next to the railway line and looking out onto the north-easternmost corner of the marshes. The wet morning had compressed all human activity into the afternoon, and cyclists, joggers, layabouts on benches — and at least two dogs judging by the alarmingly vicious fight I could hear — enjoyed the intermittent early evening glow.

I was waiting for a Lesser Whitethroat to emerge. I’d heard it faintly from the other side of the tracks and had eventually pinpointed it to… somewhere in those bushes.

While waiting, I mulled over the highlights of the day so far. Which would make it into the blog if I didn’t have any success here?

While the walk was, strictly speaking, a continuum, with no boundaries, just one footfall after another, its’ hard not to see it as episodic. As with any aspect of life. And each episode had its defining moments and birds. Some episodes built around the bird, and others pushing one forward as their candidate for a leading role in my story.

The first episodes are intertwined, the second taking a chunk out of the middle of the first.

At the top corner of No. 5 three juvenile pied wagtails entertained me with the same nervy cheekiness as the previous day. Swifts and house martins wheeled over the filter beds, their movements harmonious as though they were playing some unhearable tune together on the strings of the air. A finch with a flash of red on its flank — Bullfinch? — drew me to…

… Behind Coppermill Tower is a grassy knoll of such serenity it coudl be the rustic corner of some Capability Brown garden. I’d never stepped up here before, but the tempting thought of a Bullfinch (I later concluded must be a chaffinch) drew me on. But for the sound of a chainsaw — valiantly resisted by a blackcap — I could have stayed much longer. A mainsail of flies billowed just out of reach of the tall trees, and up in their finest canopy twigs I finally laid eyes on one of the goldcrests that have been singing so persistently lately. Tiny as can be, with large heads split at the top by a volcanic fissure of flame yellow feathers, they display the inventiveness in animal design God normally reserves for sea creatures.

… Back at the water the numbers of young wagtails had swelled to double the original number. They must be having such fun in their pre-school with all their new friends. Overhead a swallow drifted north. Surely, they are breeding somewhere around here this year.

Goldcrest, swallow and pied wagtail… two already written about, which leaves goldcrest as today’s bird of record. But, like a poker player, its’ out of position, showed its hand too soon.

Taking the long route around the back of No. 4, and walking into the sun, a female sparrowhawk glided into view. Backlit by the sun, its translucent wing tips showed the bars on its fingers as bold as cygnet rings. Gliding south it untucked its spindly legs momentarily and emptied its bowels into the drinking water below. I watched its procession across the sky, climbing imperceptibly on the breeze in steps, almost stalling, perhaps yawing about one wingtip, then flapping mechanically a few times for enough speed to repeat the process.

It made its way into the distant storm of swifts. They seemed unalarmed, with no fear of this pathetic excuse for a predator, impotent where speed, not stealth, is the name of the game. The hawk banked and glided steeply downwards behind some trees. I did not see the outcome.

Sparrowhawk, seen well, and drawing me into its world somewhat. A strong contender, and no mistake, but somehow does not move me. Could it be that I don’t actually like the bird that much?

Returning to the main public path I came across a young birdwatcher and his father, bothe pushing their bikes and the youngster pausing every now and then to investigate some forms perched on a distant branch overhanging the water. A little later I caome across some youths fishing, using the three-rods-on-a-stand setup that seems popular. One of them has his back to the others and stares through a pair of binoculars too. As I walk away I overhear his friend say, “You look like a right pervert with them binoculars, you know that”

In both of these I see my younger self. A love for nature nurtured by a father who died to young, and the cruel teasing that the hobby too often inspires. I wish it were with disbelief that I could look back on the secretive way I carried out the hobby in my teens, with not even my closest friends being aware that my greatest love was for birds of the feathered kind. Maybe this is why it’s still such a personal, private experience. Only in recent years have I fully shaken off the stigma

The comedian Daniel Kitson delivered a crushing joke at one of his shows a few years ago, demonically suggesting the audience look to their left and right and ask themselves if the friends they were with were just the people they’d ended up knowing. Somehow, when I was younger, I never once thought that maybe the people I’d ended up knowing were wrong about the world.

Walking on, I came across a family of stout-billed blackcap probing the leaves for insects. So nice to see them so well even in the leafy season. A little further along two zebra-headed great crested grebe chicks innocently cornered a balck-headed gull, who promptly flew away.

The blackcap has already featured, and the grebes were cute, but I feel they have better performances to come.

At the coppermill stream a family of coot were about as entertaining as they can be. Five crimson-headed cootlets swam as one like a many-headed hydra, and one of the attentive parents repeatedly picked a yellowish ball of some sort — a nut? — from the depths, only to be dropped by the chick who could, unsurprisingly, do nothing with this morsel that its head woudl almost fit inside.

Maybe it’s the coot’s day? One of them has to be.

Back at East Warwick’s water’s edge I watched a young, stumpy-tailed grey wagtail, with the pale pink legs I only this afternoon realised are diagnostic, mince along the strandline of mushy green algae.

Exceedingly tame, this one lit the fires of joy in me more than any other bird today, but its time has been and gone

Round the back of the reservoir a fox scarpered across the railway line, chased by a pair of scolding sedge warblers. A singing goldfinch in a bush, a green greenfinch, heavy-headed as Nick Cave, on the overhead wires, and a small flock of daytripping starlings cought my eye too. The reed beds sound excited to see me again but it is, of course, only the reed warblers. One of them nips off a feathery seedhead and carries it back to the nest.

Memories the afternoon’s sights and sounds to pass the time while waiting.

For the lesser whitethroat to appear.

For almost an hour.

A lesser black-backed and a black-headed gull united to taunt me with the same “ca-ca-caaaah” calls. Blackcaps and whitethroats — both close relatives — were out in force, feeding and singing in the open and doing their utmost to raise then dash my hopes.

But the bird I hoped for did not show. After twenty minutes it even stopped singing.

Worse, a few brief glimpses of things that may have been it, but not clear enough to be sure. A fate far worse than definitely not seeing it.

The torture of birdwatching. My love, my life, my agony.

To which this post will stand as a memorial. 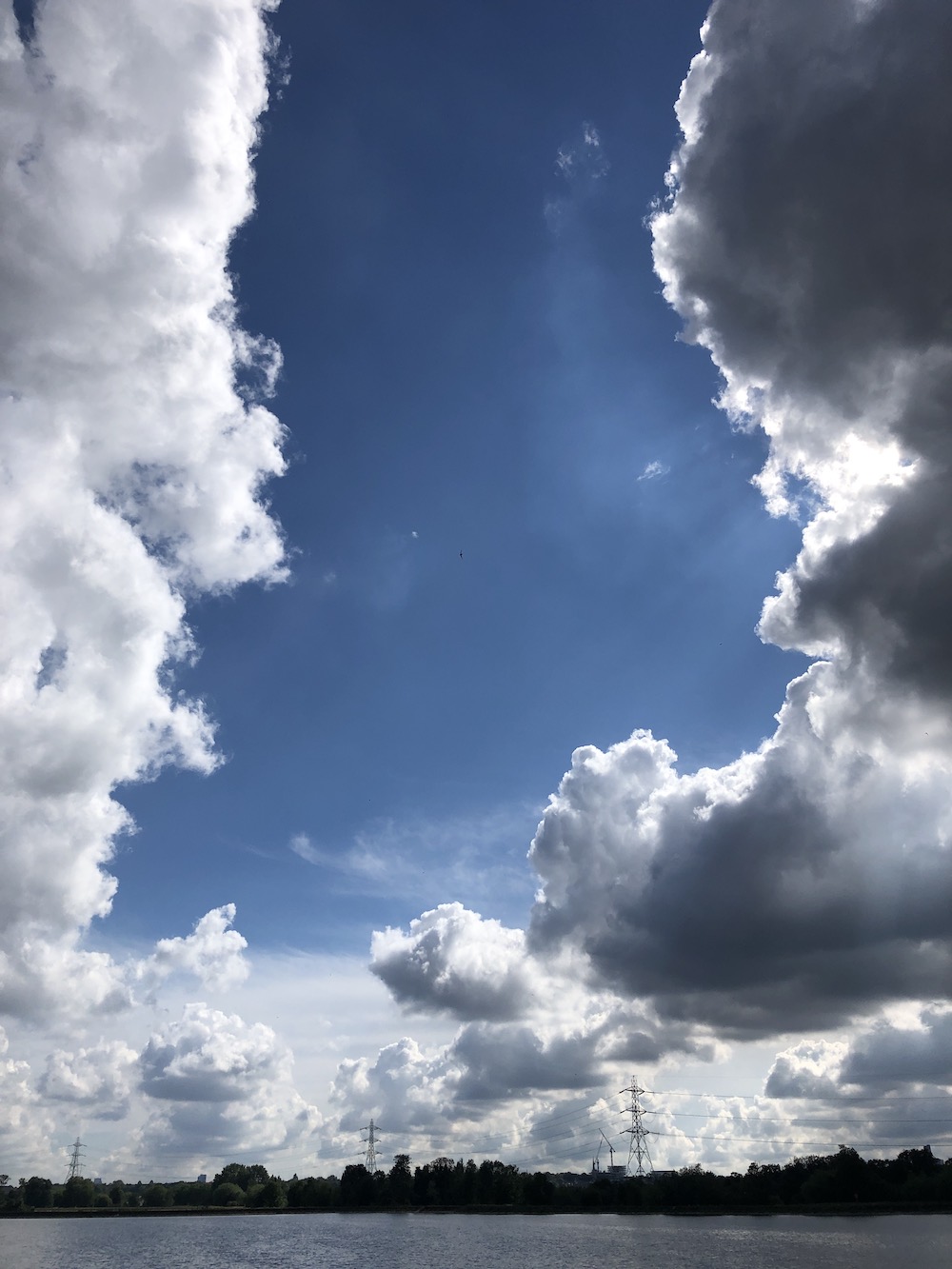