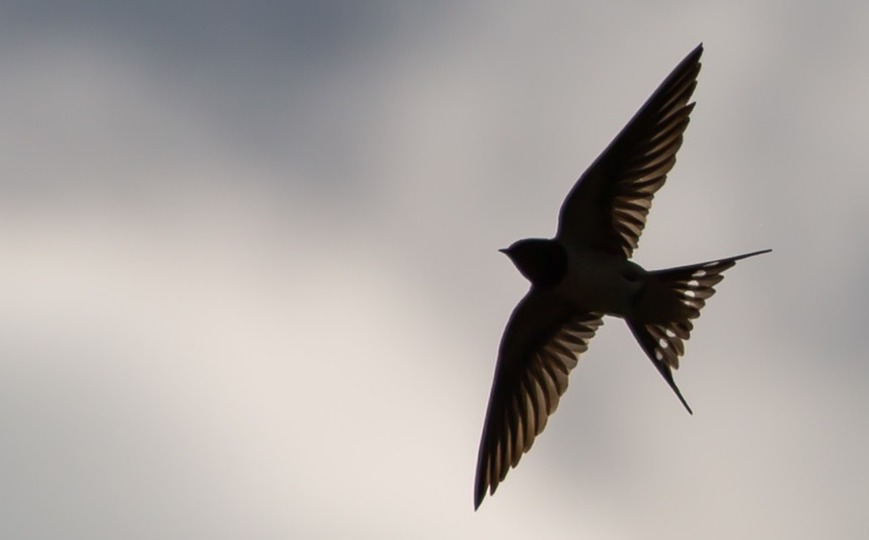 I regularly chastise people for infringing regulations at the Walthamstow reserve designed to keep it safe for wildlife. Aside from some occasional rudeness, I generally get a respectful response. On one occasion a white middle class jogger got very uppity with me and another birder and his choice of words really stayed with me: “Do I look like the kind of person who would break the rules?”. As is often the case, the perfect riposte only came to me later: “Do tell me, what does someone who would break the rules look like?”

Following George Floyd’s death last week a few people, including Dara O’Brian revealed that they tell their, “I got caught with a forged bank note,” stories as annecdotes. The very idea they could’ve lost their lives over it seems absurd, but unfortunately it’s not if you’re black.

Earlier this week I watched Trevor Noah give his take on the Black Lives Matter protests, and I learned more about the other racist-white-america story of the week. That a birdwatcher in Central Park, doing exactly what I do without fear every day, was faced with “a woman who […] knew how to use the power of her whiteness to threaten the life of another man and his blackness”.

White privilege gets everywhere I guess.

Birdwatching is largely a white men’s club, and I do sometimes feel highly aware of, and quietly amused by, this. I’d never properly considered that white privilege, unconscious bias, structural racism and related factors could play a part in it being how it is, but it is an overwhelmingly white activity in a massively multicultural city. That doesn’t sit well.

I’m not sure what I can do in the niche intersection between birdwatching and racial equality, but I feel like it should be something. Isn’t the first step to recognise there’s a problem? And the second to be an ally?

So I think I’ll take the binoculars to Kensington Gardens tomorrow on my way to the protest. Might find some little owls. #BlackBirdersWeek

I had a target bird to write about today, but it didn’t show. There’s a bush on the marshes which a particularly strident and confiding Song Thrush uses as its song post. This morning it had better things to do than entertain me. Kids to feed?

So I fell back to writing some notes about the sedge warblers. They are always fun, with songs like the cacaphonous recording of all the trainsets at a model railway enthusiast’s convention. I wasn’t planning on going out again, so the brief and distant views I had of one would have to do for visual interest. It felt like a disservice to such a characterful bird to be rolled on as an understudy.

Before it went into make-up though it was rescued by the arrival of a far more impressive contender.

I cycled to B&Q again to buy a tenon saw; yesterday’s skee-whiff attempt at joining two pieces of wood had me, the bad workman, blaming my tools (though I had a point as any saw other than a tenon really won’t do for joinery). I was reminded of the first job I ever held down for more than a few weeks, stacking shelves at my local branch of B&Q. I was 17 and a woman telling her son not to bother me was the first time I ever got called a man. One night a door fell from the shelves onto my head, giving me the slightly crooked nose I have to this day. They were more innocent times, and no “Have you ever been injured at work?” adverts tempted me to sue, but I definitely deserved compensation.

I cycled back along Forest Road, between High Maynard and No. 4 reservoirs. The sky still ran thick with swifts and I paused for a moment to watch them zooming too and fro above me. A young starling almost landed on my head, but was urged on by its parent to try the jagged Thames Water perimeter fence instead. The adult had cobwebs laden with willow seed fluff stuck to its back, but seemed unconcerned by how ridiculous it looked. All dressed up for Halloween before the summer solstice has even passed.

They scampered off as a distinctly predatory silhouette approached. In the few seconds it was visible I noted it’s slender pointed wings and thanked my lucky stars to have had a hobby cross my path.

Last year the hobby was my totemic bird. It may have been finding a showy Avocet that others in the birdwatching group seem to remember me by, but to the best of my knowledge nobody else saw a hobby on the patch last year… and I saw three. This year, however, there have been plenty of sightings — I myself have seen them three times already — leading to speculation that they’re breeding nearby.

Surprisingly, by the end of the day not even the regal hobby could retain the crown for the day’s most magical birdwatching moment. That was provided by a far less glamorous suitor.

Rain was forecast for the afternoon so I went out to the reservoirs after all, as much for the weather as for the birds. I’m not so much of a masochist as to enjoy every downpour, but something in my North-Walian soul feels cheated by a month without rain.

Leaving the main public path I took the underpass beneath the railway line to West Warwick reservoir. Completely closed to the public, and hidden behind the railway tracks, the atmosphere here is very different to the rest of reserve. The grass on the banks is greener, and the water’s edge is lined with more reeds. Though it has the life and bustle of Clapton canal-side within sight and earshot, it could easily be a lagoon in a remote Estonian marsh. 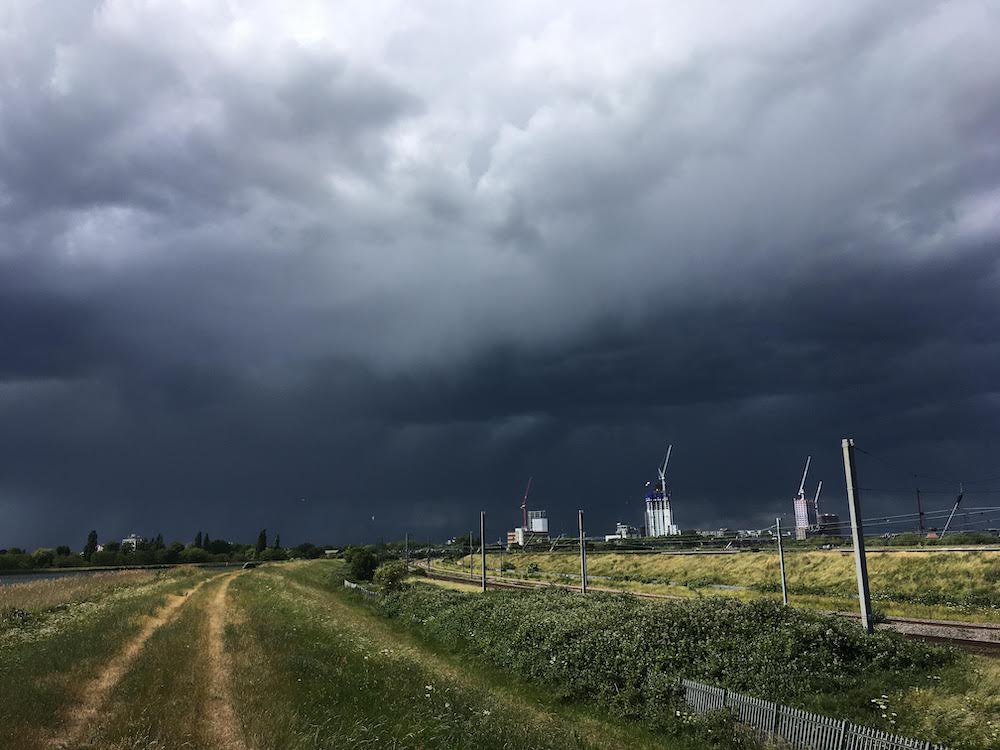 Menacing clouds slowly drifted in from the west. The squally wind that heavy rain clouds often send on ahead arrived, drawing a special “Wind grin” (suitable for mountain tops) from my face, but then the cloud loosed only a few meagre drops of rain. After it passed, beyond I could see rain reaching down to the ground in tendrils the same colour as the clouds, a deep, bruise-blue shadow. You can tell how heavy the rain will be by the shape reaching down to brush the ground; silk handkerchieves or a solid broom of grey. I learned this when birdwatching on The Wirral in my teens.

Even though the rain was poor, the grass still soaked my trainers. Wet feet — what joy!

I watched the many swifts slicing and dicing the air above the lake, and started to film their breakneck trajectories when I spotted a dark bird flying low, swift and steady over the water. I immediately grabbed my bins to confirm what my birdwatcher’s instinct already told me I’d seen — a Swallow.

Swallows, as mentioned yesterday, are not city birds, so I did need to double check. I thought I’d heard one — sounding like a tape played backwards — on the marshes about a week ago, and possibly seen two in the distance on the reservoirs the same day I saw the osprey. There is hope they are breeding somewhere not too far away in the valley.

When I was young, swallows had a reputation as colourful birds, the quintessential exotic summer migrant from Africa. When I was seven years old we took part in an art activity which involved colouring in the outline of a swallow; you can imagine how gaudy our efforts were. It was the eighties, so arts and crafts technology was not as advanced as today’s, but I believe felt tip pens were involved.

A few days later an actual swallow flew into our living room window, dying in the process. I begged to take it to school to be added to our “Bwrdd natur” (“Nature table”, the welsh rural equivalent of what I think English speaking schools call “Show and tell”). The fascinating thing, I remember our teacher explaining to the class, is that the swallow was nowhere near as colourful as our imaginations. Truth is drabber than fiction.

On paper, in bird books, the swallow doesn’t look too dreary, with a dapper navy blue back, cream front and bold red chin and forehead. It could almost be the inspiration for the Napoleonic army’s uniforms. But in real life the cream is muddied, the red darkens to art-school Doctor Marten boot dark, and the contrasting dark blue back is lost in the silhouetting of the bird against water or sky.

But what the swallow has… what it has that no washed out drizzle, fog or glare can conceal, is one of the most graceful flights of any british bird. It appears truly effortless, both steady and exhilirating at the same time. They tend to fly low and straight over the water, travelling with the unhurried, lithe movements of a speed skater, wing over wing languidly drawing speed from thin air. To change direction they climb, loop and dive down like a skateboarder pulling tricks in the skate park. Swallows seem to be on rollers or rails of some sort, their economical movements serving only to trip them from one perfect curve to the next. 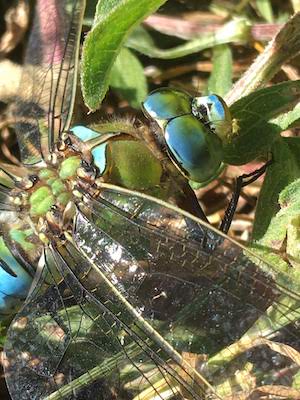 Through the medium of its flight it’s other charms are revealed. Its forked tail ends in two pointed streamers, and beneath it two white eye-diamonds of feathers can be seen, printed in a hidden away spot like the subtle hallmark of a master craftsman. And, in the right light, the glossy blue back does have its day, a negative image mother-of-pearl sheen shimmering on its shoulders.

I sat watching for an age, treasuring each moment, and hoping it stays the summer.

I went on with my walk, passing a fisherman fast asleep in his fishing tent, an exhausted dragonfly cowering on the ground and a juvenile pied wagtail — the first of this year’s nestlings to fledge.

The wind whipped up again, the foot-high waves crashing on the shore and making a sound like geese bathing. For the first time in months I needed to put the rain-guard onto my bins. I yelled “Ya blockos” ecstatically at the weather as the real rain came charging out of the sky. As it passed a subtle low rainbow hung between cloud and earth, and the maelstrom, polyped and swollen like a sow’s belly, made its escape to the east. 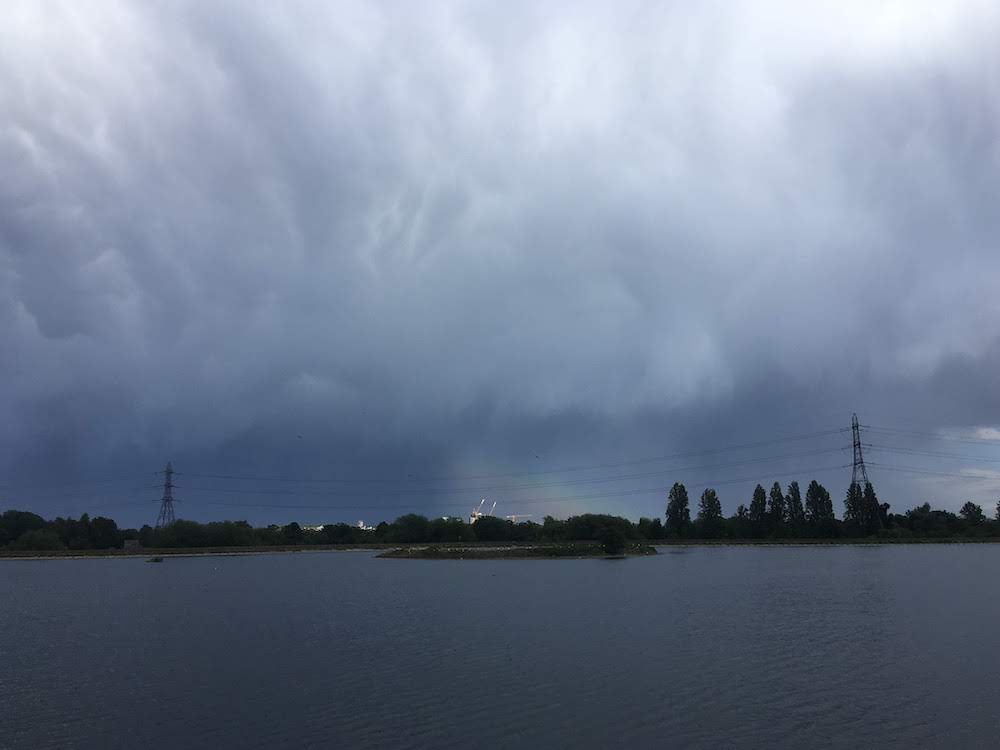