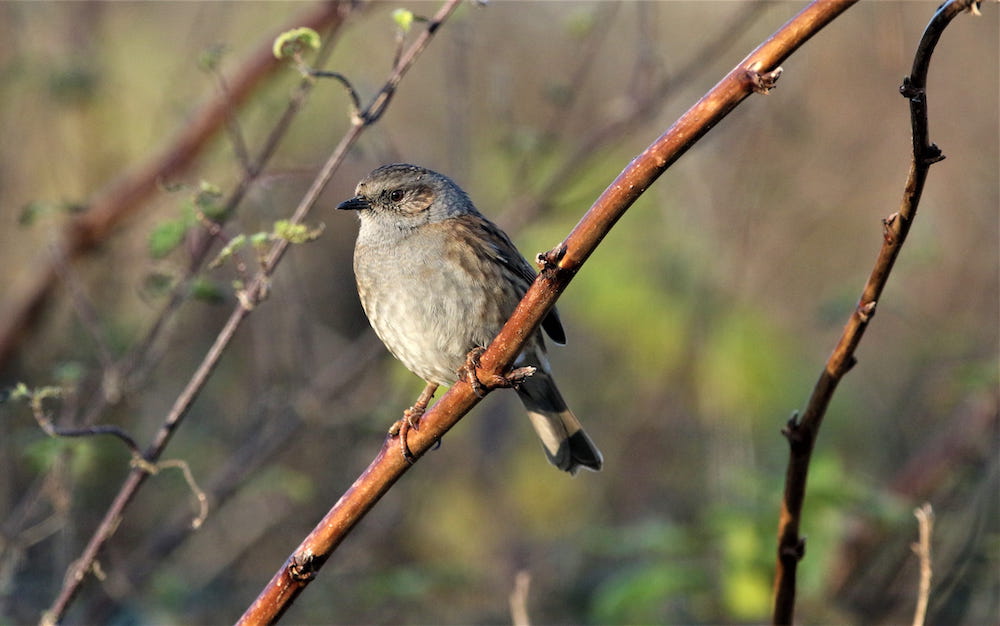 Lyndon B. Johnson is arguably one of the most effective US Presidents of recent decades, overseeing a period of prosperty, incremental improvements in liberty and the pivotal years of the space race. But he is also one of the least memorable, with no flashy persona to sear onto the public consciousness in the way Kennedy, Nixon or Reagan did.

I have no idea if the term for unassuming, dull little birds is a play on his initials (I’ve only just noticed they are the same) but LBJs — Little Brown Jobs — are a staple of the birdwatcher’s lexicon, and today I will tell you about one of the finest: the humble common-or-garden Dunnock.

But first, as per usual, a tour of the wetlands.

It is early morning again, and the heavy overnight downpour slowly segues into a drab overcastness, depositing its last drops as I arrive. At the usual warbler bush a melange of birs congregate, though very few warblers this morning. Stars among them are the seven young blackbirds, covering all shades of brown, from beech to ebony and a rare good look at a very well-turned out male chaffinch feeding on the ground.

Each day the swifts and hirundines acquire a new personality, like Mr. Benn. “Who will I be today?”, they appear to ask, and come up with a different answer each time. Today the swifts sail along slowly at the speed of an aiport travellator, in great flocks swelling and contracting above the trees like a loosely knit lung. The sand martins are back in their usual place skimming along above the lake, the members of little families following one another as if threaded on a string. The few join in with the house martins (I wonder where they’ve been hiding the last few days?), who are back to their usual tricks, treating the low bridge between reservoirs 3 and 5 as if it’s the fulcrum of a wall of death. Several times I flinch with an astonished giddy smile on my face. No swallow though — I’m resigned, now, to the probability that none are staying all summer long.

Around the back of No. 5, where I make the obligatory detour in search of rain-downed waders, I observe an adult great black-backed gull well into its moult, pale patches showing on its ordinarily evenly inked wings. A herring gull chases it away from the colony and it makes a painful retreat, croaking like a gruff dragon coughing up phlegm. Its deep-chested barrel body, yellow tomahawk bill and daunting size are no match for the brazen cheek of a protective parent. To add insult to injury, its feet show right through the sparsely feathered tail so often attacked by its smaller pirate cousins.

Drawing me on round the lake to this story’s final resting place — the woodpile by the fisherman’s hut once again. The fantastical local Xanadu for many a little brown job.

As more and more nests spill out their contents of birdlings out into the world it inevitably becomes more and more congested with them. The bushes are heaving with unpreposessing grey-brown bundles of beak and feathers, fluttering naively from tree to tree, where they cling to the branches with spindle legs and, dependent on age and species, either beg for mum and dad to deliver the goods or make valiant attempts at self-sufficiency in nature’s larder.

Blackcaps and reed warblers seem to be the most numerous at the moment. I see several adults this morning chaperoning their young. The reed warblers, more proactive on the feeding front, accumulate beakfulls of flies for the family table, whereas the blackcaps are apparently more laissez faire. A few whitethroats, robins (in various states of attire) and chiffchaffs are also dotted about, and I watch one juvenile cetti’s warbler — the first I’ve ever seen — clamber about in the hinterland betwen the woodpile and the wet grass. I can already tell it’s a youngster from its pinkish legs (how od that only some young birds have baby pink legs), and am delighted to hear perhaps the first few timid rehearsals of what will eventually become the adult’s brash calling card.

But the darlings of the morning are the perfectly formed, packets of humdrum grey placed on top of the woodpile in the form of a family of dunnocks. They appear prehistoric and dainty, feathers arranged like pale scales or a grey masque around their eyes, and little cocktail beaks accessorising to perfection. It’s the sort of minimally chic outfit you think looks great but you’d never wear yourself that appears on the cover of Avian Vogue. One perches with its back to me and spreads first one chestnut wing, then the other, and then the matching tail in an exquisite miniature pilates ritual. It glances over its damp, faintly pinstriped shoulder at me and holds my gaze — it knows exactly how good it looks.

But what’s this? Waxing lyrical about the attractions of a drab little brown job?

A) That’s the whole point of this blog, and B) As boring birds go, Dunnocks have enough pedigree to have beaten all the stereotypes.

The dunnock is one of the first birds I can recall… not exactly the moment I learned of their existence, or how to recognise them… but I do remember being aware that knowing what one was set me apart. Dunnocks are everywhere — one of our commonest birds, and tame enough to be fairly certain you’ll get within a few yards of one on most days — and yet, unlike the robin, blackbird, wren or blue tit, nobody has ever heard of them. They are one of the first birds to sing in the “spring” (they tend to start in late December or early January) and their song, while not blessed with a killer hook, or much of a melodic structure at all really, is nonetheless a pleasant, unobtrusive but bright accompaniment to a winter’s day’s stroll.

They are so unassuming that, until last autumn, I’d never properly learned waht they’re calls sound like. A Robin tic_s, a blackbird _chook_s, a blackcap _tchak_s and a great tit _tchay_s… but it had never really crossed my mind to pay attention to what outher sounds a dunnock makes. Only after half an hour of vainly scanning the cornish seaboard scrub for the mysterious source of a sound did I realise that those nervous, slightly hoarse _seep noises, like the highest harmonic from a wheezy old smoker’s lungs, came from the ubiquitous grey man of the hedges.

With no close relatives in the British Isles, they are almost impossible to find in the bird books (they keep moving them around to where there’s space!) and battles have raed over whether their colloquial name of hedge sparrow is acceptable to use in print, even, for a time, precipitating the esperanto-like ugly compromise of hedge accentor! I’m not sure where else to mention this, but “In the book section” feels apt — there’s a novel about a year in the life of a Dunnock called Heart of the Valley. I read it while a teenager, so can’t vouch for its quality, but maybe I should read it again.

One final little upsell of the dunnock; apparently they have fascinating sex lives (if I could remember the source of that information I’d include a link, but you’ll just have to imagine it).

It’s always the quiet ones you have to watch.