At lunch I walked to the waterside, but all I could feel was the heat. Though the terns, shelducklings and teenage grebes tried to inspire prose, the stifling heatwave is mightier than both the pen and the sword.

Perhaps, before forcing myself to write some hackneyed, forced filler piece, I will head out in the moderately cooler, late afternoon air to clear my head.

Perhaps that would be best.

In the last days of December, while the Christmas virus unwrapped itself in the East, and in Australia fires raged out of control, I waded in wellies through lammas meadow at the south end of Walthamstow marshes. Flooded deeper than at any time in the past ten or twenty years, it too was a reminder of impending climate change (although someone shared a photograph from the eighties when the entire field, from canal to raised path, was under several feet of water). Black-headed gulls probed the mud for worms and drowning creepy-crawlies but neither I nor the myriad gumbooted dog walkers could unearth a single snipe. Some flood that turned out to be!

This evening I sit in the same soft hollow in shorts, long stalks of dried grass brushing my bare knees, occasionally delivering a large, red ant settler to explore and resist aggression from the native thumb and forefinger. Despite the early morning’s downpour the ground is dry as a bone. Cracked earth and miniature, caved-in sink holes mark the extent of the winter’s floods.

I have chosen the exact spot at which I sit in the sun’s slanted rays to read my book about curlews because nearby is a banjo player practicing among the straw. He plays quietly and I cannot pick out a tune, or even a rough chord progression, but I enjoy the odd moments when a few twanged notes reach my ears. A couple of linnet fly, unseen, overhead, joining in with a few short words plucked from the wind. I regret not bringing the mandolin.

The dry grass stems glow white in the sun, but underneath the grass grows lush and sustains a small orchestra of crickets. Towards the canal I hear intermittent stuttered phrases of reed bunting song. A canal boat pootles along a few hundred meters distant. On board they are singing karaoke — Tainted love, followed by I wanna dance with somebody and finally Call me maybe. As the boat moves past the amassed, angular ridges of modern apartments the sound is directed towards or deflected away from me, like an aural hall of mirrors. The histrionic singing drifting in and out of earshot, intermingled with the quiet, pastoral sounds of the sun-baked marsh has a kind of comic pathos to it. All breaking out of lockdown in the way we know best. We are all God’s creatures. 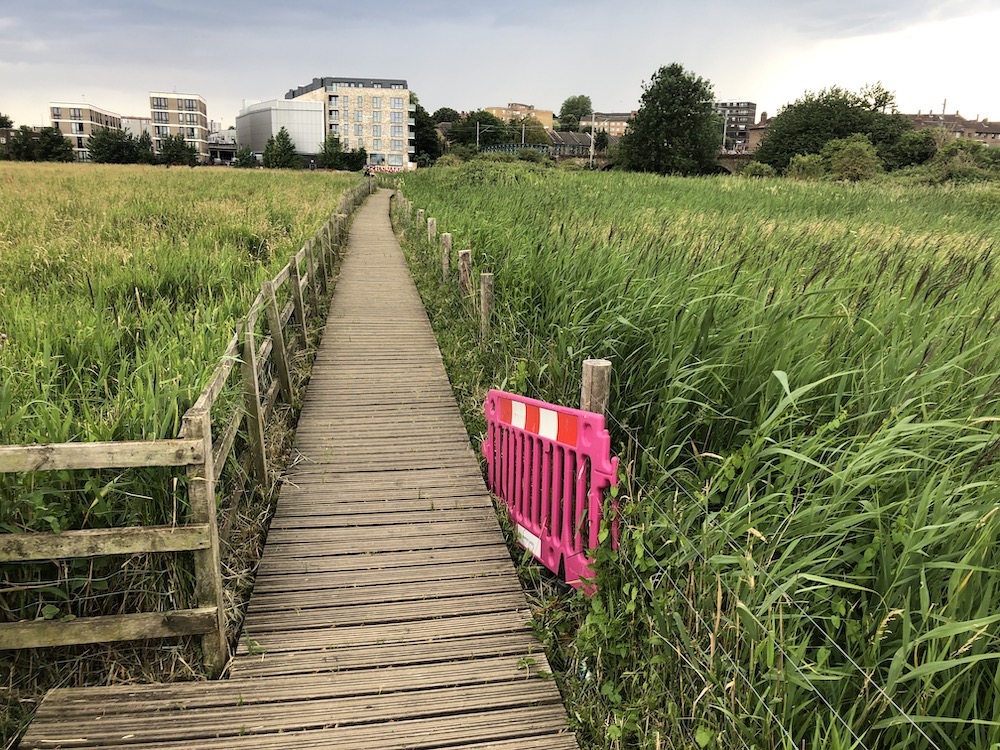 It also reminds me of the time I lived in Bow, on the evening before Radiohead’s big gig in Victoria park. I walked to the corner shop to buy a few drinks and on the walk act the support act’s music was stretched by the wind and ricocheted chaotically around the tower blocks; an unexpected kaleidoscope of sound far more urgent, urban and evocative than thos eon stage had intended. This evening is shaping up along similar lines.

A dappled cauliflower of cloud steps in front of the sun, only to melt away minutes later. But a more determined cloud-slick spills up from the south-west. The washes of pale grey colour build up until the sky, the air, the light and the day are reborn. 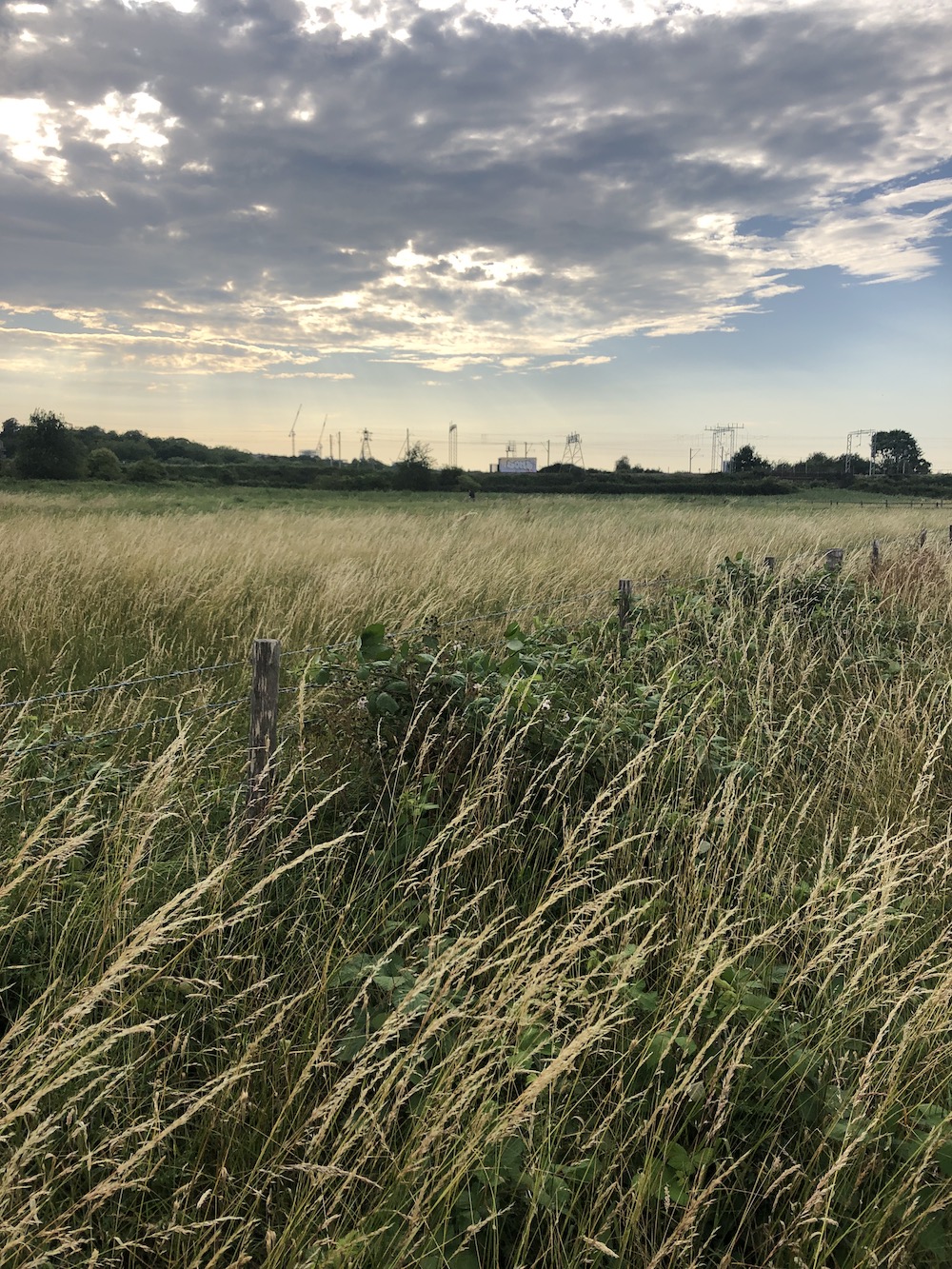 A cool wind rises and the grass pulsates like seaweed on a rising tide. Skin, prickly with heat but a second ago, feels comfortable once again, even sprightly as the grass brushes against the shins. Blackbird, song thrush, reed bunting, a train horn, a distant siren… all soloists against the rising sibillance of shivering grass and the chatter of humans, cooling, rising and heading home for tea. The ground darkens under the tutelage of the sky, and washed-out greens and browns return to their vivid, saturated palette. Organic towers of red dock seedheads emerge grandly from the substrate, and the blades of reed grass toss and hum like a city or a jungle. A chiffchaff beats out its high-pitched ode to spring.

7pm, and the land has awakened.

Entering the north marsh I hear a round table of house sparrows chirrupping — yes, they really do chirrup — from the brambles, whose flowers are now giving way to little green maces of berries. A dunnock’s song wriggles out of the undergrowth too. Beyond, a tern spreadeagles its tail and dives, out of sight, for a fish.

I see what initially looks like a sparrow crouched on a twig of bramble at the edge of the thicket, but it is a Whitethroat, and an exceedingly cute juvenile one at that. It’s soon joined by its sibling and they both entertain me with their disarmingly naive attitude to humans. Both surprisingly clean white throated — I had imagined it was the kind of flashy plumage feature that only an adult would have — they are nonetheless very obviously young birds. Their heads are brown, not grey, their feathers have the airy freshness of new pillows, and one still has the remnants of a yellow gap showing at the corner of its mouth. Their mother emerges to stand guard, or draw them back to safety, and I notice another detail that gives them their youthful appearance. She has amber yellow eyes, but her children’ are beady and black, giving them the lovable appearance of stuffed toys. I’m grateful to this blog and its bloody-minded determination to keep paying attention. 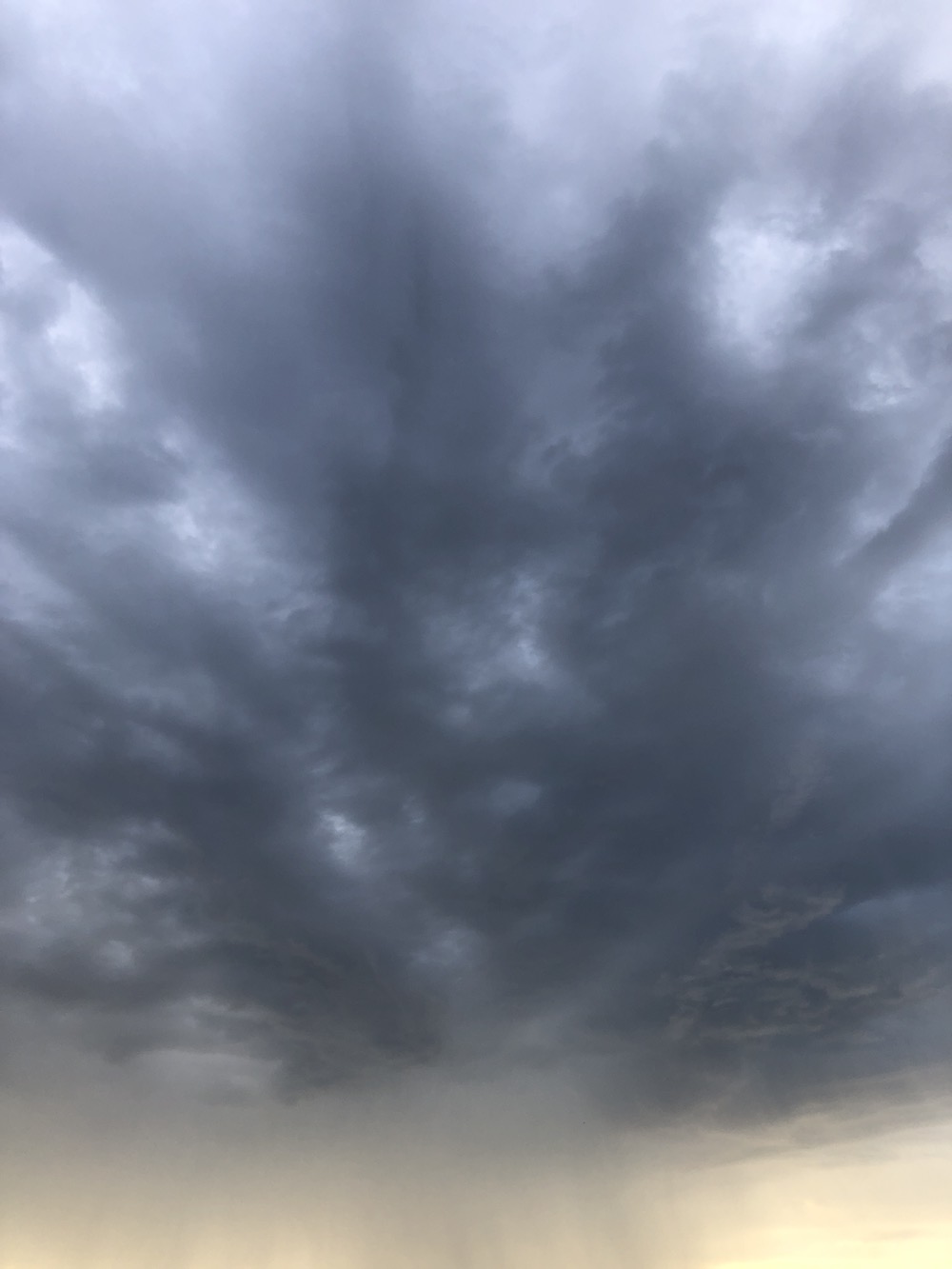 I continue across the meadow, the cloud — that two weather apps assure me is impotent — gathers itself like the end of days and squeezes out a brief but dramatic downpour. The cool, grey-yellow light almost pulsates through the rain, and the smattering of pale flowers in the long grass, each one looking like a whisk dipped in whipped cream, is an invitation to calm.

A woman walks by pushing a bike at the same moment the sound of an ice cream van is blown over by the breeze. The comic pathos is restored. A song thrush sings again, a blackbird, a greenfinch bombs through the air, and a distant siren again sounds.

We are all God’s creatures. 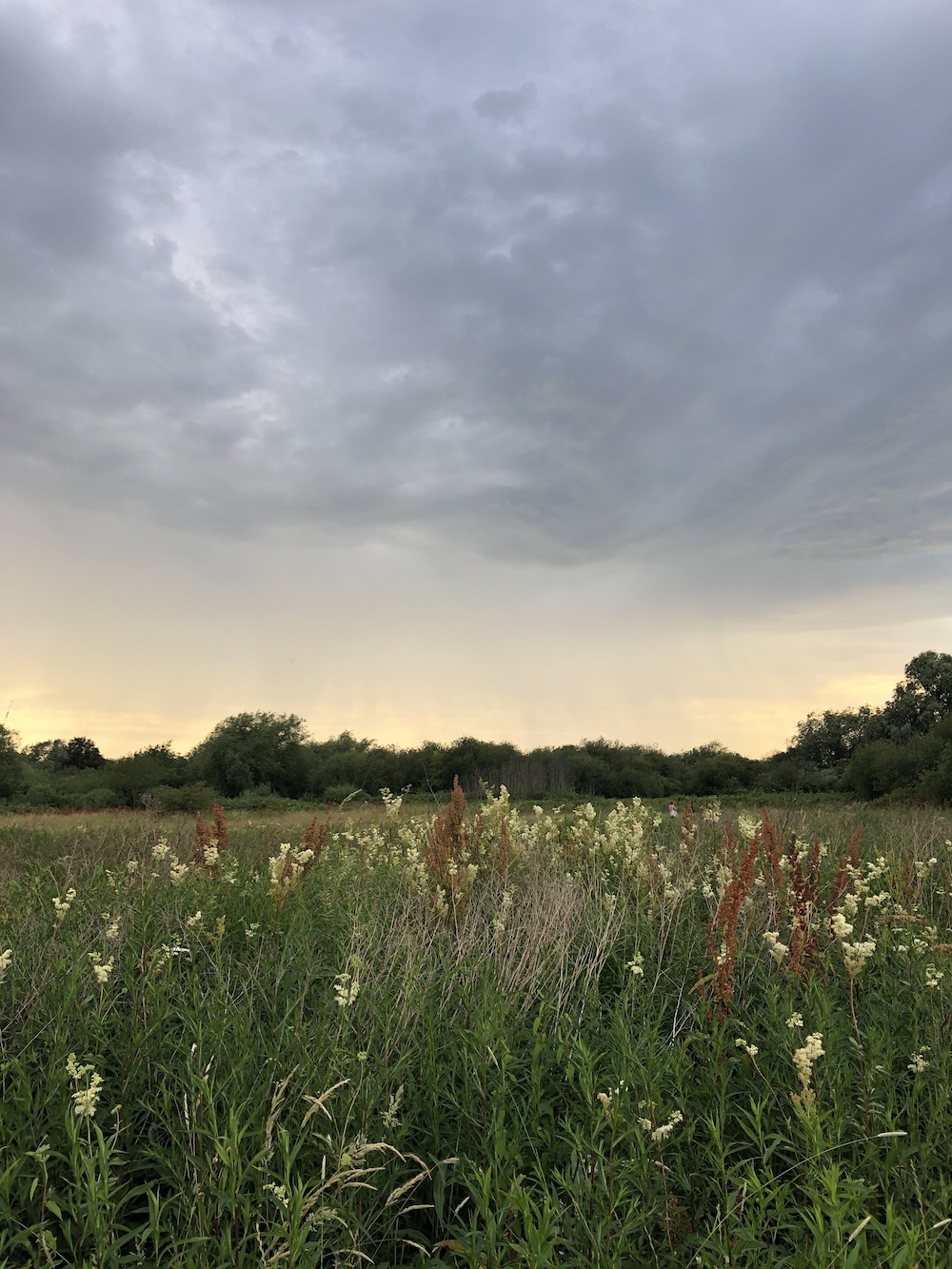