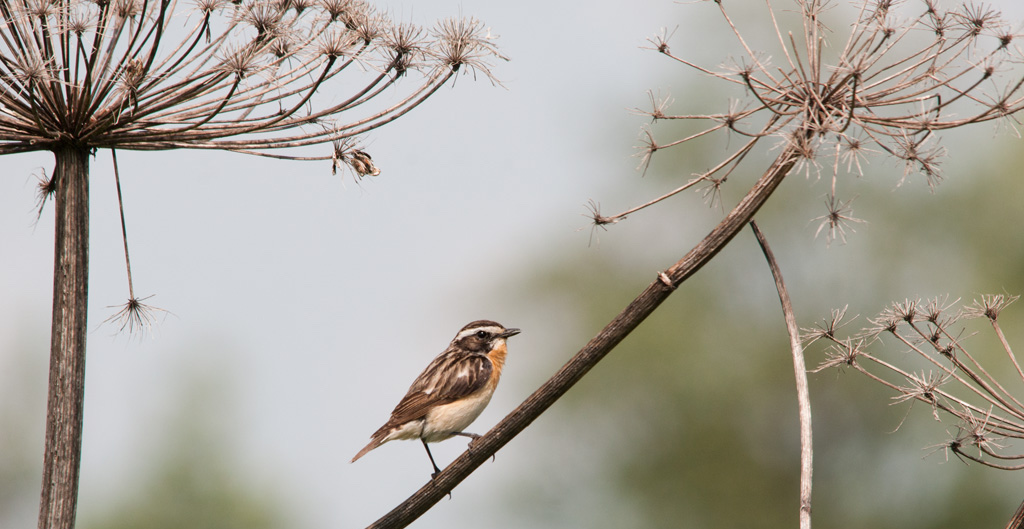 It’s been a scorching July afternoon, and I joined the hoi-poloi strolling and cycling in sun hats, and picking the earliest ripening blackberries from under the eyes of tut-tutting blackcaps. But if, like me, you’d begun the day at seven, you’d have seen a surprisingly cool and overcast start to the day, more in keeping with October. So the rest of the day was an unexpected outcome.

I go on about the coming of autumn a lot, and there were more signs today. It’s perhaps not so much the comming of autumn but the ending of summer. The birds are, one by one, losing the urge to sing, just as tired old couples can lose the flirtatious spark. Sedge and reed warblers and whitethroats, still filling their respective undergrowth, reedbeds and bushes with their particular variety of rattling just a few weeks ago, have fallen silent. Reed buntings still sing their creaky few notes now and again, but the collcted menagerie of bird life no longer fizzes around the reserve. This gives the classic feel of midsummer birding — the silent hedgerow under the baking sun, the hum of crickets in the dry grass the dominant sound now, and everything needing a drink of water.

Some other familiar faces were showing the signs of transitioning to a new stage of life. The juvenile grey wagtail around East Warwick I’ve introduced before now sports a respectably grown up long tail and bright yellow vent feathers, but still gives away its youth by it’s still pinkish legs. A sand martin, changing direction alongside me, fanned its wings and showed it was already moulting. A bit of research has taught me that mostly they moult in their African wintering quarters, but a tiny minority may start before they leave. I’m enjoying the little details of these orinary birds I’m picking up in these two months of intensive interest-seeking.

And on the tern colony island one of the oldest chicks gave its wings a vigorous flap in preparation for flight in a day or two. I watched a cloud of cantankerous terns wheeling above the inflow pipe on No. 3 reservoir, picking arguments and engaging in minor skirmishes with each other — jostling for the best fishing spot one woudl imagine, although they are in such constant, wheeling motion it hardly seems to matter. Every so often a tern would halt, splay its forked tail (looking like fairy wings) and hover before plunging for a fish and leaving to deliver it to junior. With these repeat close up views of them flying by just above eye level I noticed, for the first time in my life, how cute and pointless their little cartoon legs look in flight, like the nut-holding hands of a squirrel or the legendary useless arms of a Tyrannosaurus Rex. 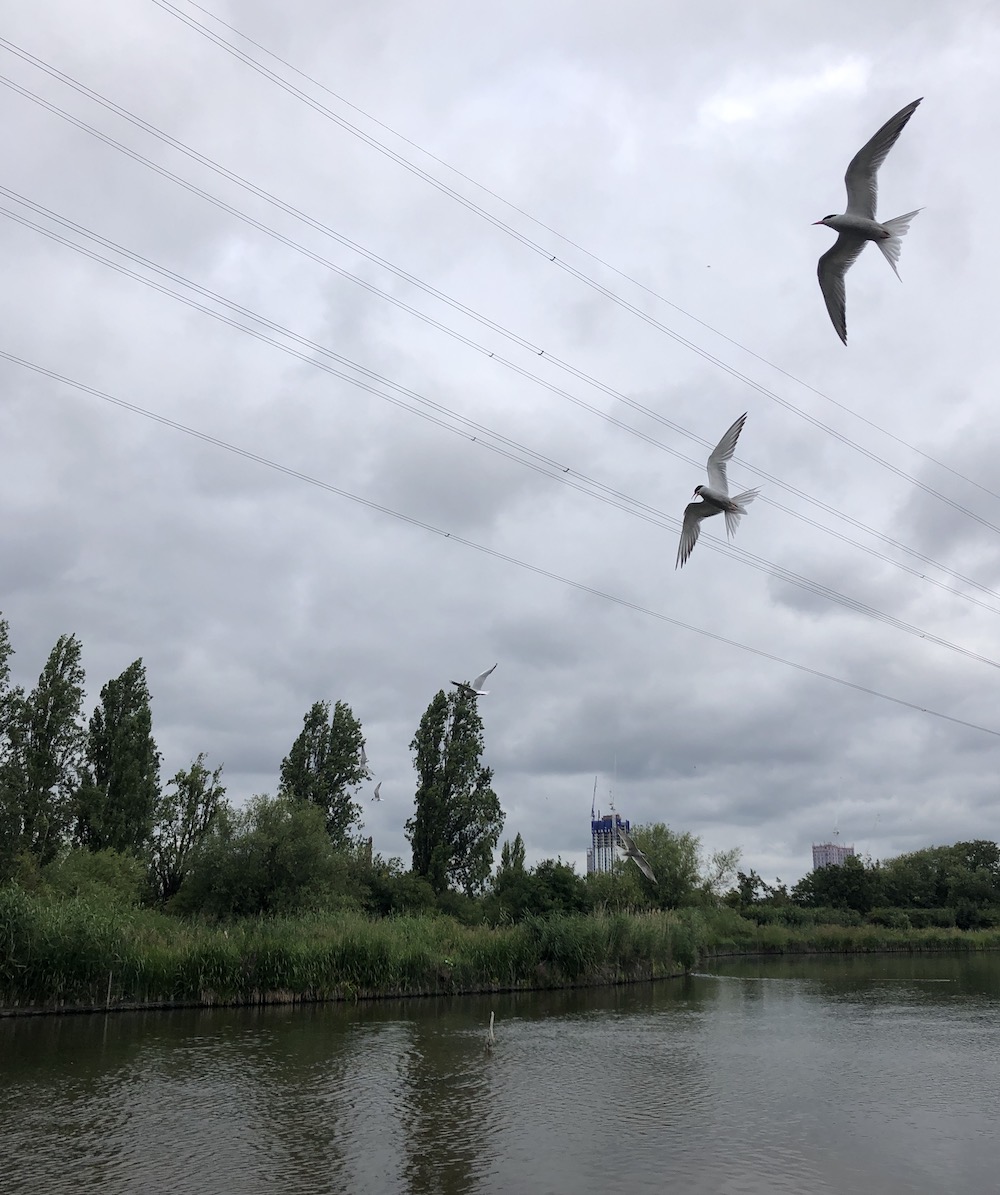 At this watering hole they tolerate — or are tolerated by is likely more accurate — the resident heron most days, but the opposite is far from true. A heron flying above the colony triggered the most virulent flash-mobbing I think I’ve seen yet, with every tern and black-headed gull focusing their energy on repelling the lanky intruder. As my Essex friends might put it, it was “mobbed to shit!”. One tern transformed in an instant from laconically surveying the shallows into heron seeking missile, answering the signal with a powerful, dart-like turn of speed. I also saw an aggressive chase between some grebes. Maybe there’s something in the water. 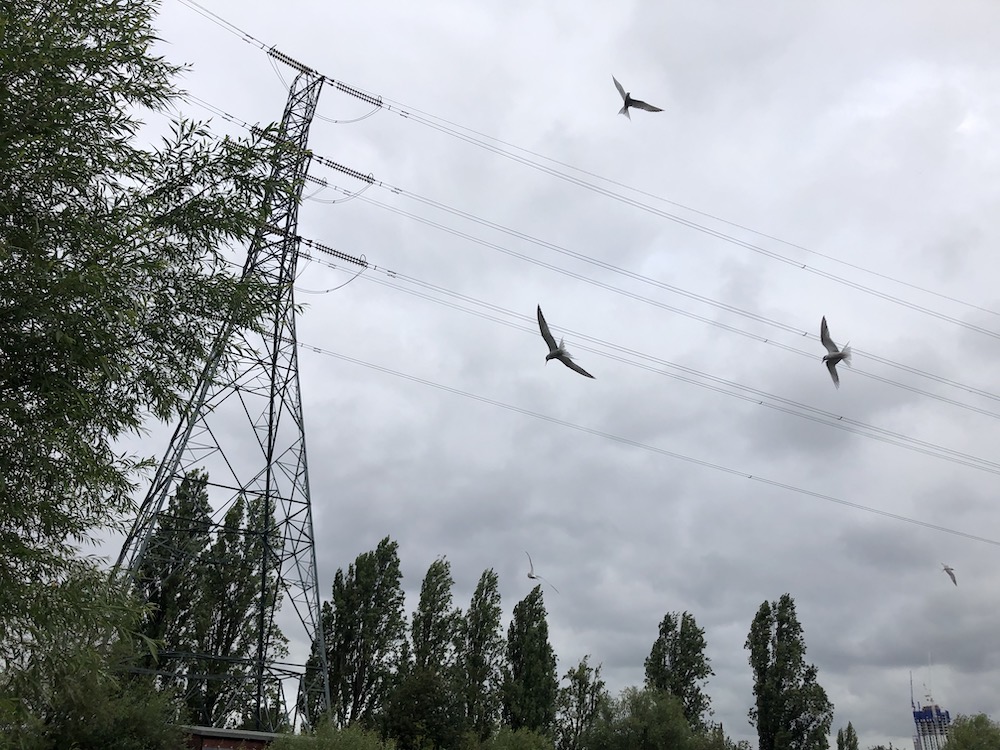 I found a Whinchat.

Whinchats are one of the bellwether spring and summer migrants, with a few hundred passing through London each year, and among the earliest to pass through in both spring, and especially autumn. I’m pretty familiar with the figures because last year I volunteered to help edit the London Bird Report. Being a beginner I was allocated just three species — the closely related stonechat, whinchat and wheatear. Collating the reports from two years ago, and being a programmer by trade, I couldn’t resist visualising their records — green for spring, blue for autumn shows the wheatear is commoner in spring, and the whinchat in autumn.

I was also ingratiated to find in among them my own record at Walthamstow, not long after being invited into the Whatsapp group, and the first time I think I’d ever found a bird of note on the patch. Whinchats and I have history.

This history predates my time in London. In my teenage years I’d be driven around various northern birding hotspots by the kind members of Wrexham Birdwatchers. On one occasion, driving back from Lake Vyrnwy with Norman and Pauline, we stopped off near a hairpin bend on one of the countless single track roads criss-crossing the mid-Wales uplands. Surrounded by bracken, drying in the high summer sun (temperatures likely a lowly 22-23 degrees, but warm for Wales), we were treated to a display of umpteen whinchats ticking us off from their perches in the invasive jungle of hardy ferns. I think that’s the first time I ever saw one.

Because whinchats — unlike their ubiquitous scrubland cousin the Stonechat — are far more localised and selective where they spend their time, and are not a bird you inevitably run into. Most times I’ve seen them in their breeding grounds, they have been gathered together in something like a distributed colony, for some reason preferring a particular expanse of bracken or gorse over the seemingly identical nearby ones. Eglwyseg — one of the many alternate names for the moors to the west of Wrexham — is largely inhabited by stonechats, except for in a handful of locations (that I know of) where the whinchat is king. During migration too, while stonechats and wheatears pop up all over the place in ones and twos, I’m told that whinchat can reliably be found in numbers in the bomb crater field — so named after an exploded V2 rocket — on Walthamstow Marsh.

Today’s specimen was as delightful an example as any I’ve seen before, with that added cachet of being the bird to put an end to my mid-summer doldrums. Walking up the east bank of Lockwood — my attention fixed on a putative yellow-legged gull gliding in to land in the distance — I paid little attention to my immediate surroundings until a flock of linnet bounced up just ahead of me, and a companion of theirs scarpered in the opposite direction, flying low over the water to seek refuge on one of the vegetated rafts. With a little light colouring on the sides of its tail and white patches on its shoulders it had to be a whinchat!

It can be difficult to tell without a proper view, and I began to doubt if the pale parts of the tail were really white or maybe a trick of the light, and I’ve made mistakes before. So began the battle of wills between the birdwatcher on the shore and the small bird skulking among the weeds some 100 metres away. I think birdwatching appeals to many parts of the psyche, and this kind of stakeout I think is a far more rewarding workout for the hunter and puzzle-solver in the mind than fishing, crosswords or computer games.

The challenge is to convince myself — beyond reasonable doubt — that this bird is not a stonechat, which is the commoner bird (though, on balance, less likely at this time of year in this location… which in itself is one of the most important clues in solving any bird identification puzzle).

Stonechats are also very bull-headed and upstanding — one could imagine them in a bowler hat — whereas whinchats are far sleeker, but possessive of a nervous energy, like an edgy geezer trying to shift some stolen goods on a street corner, looking out for the rozzers. This bird had a definite leaning towards the latter description, but a distant view of an immature bird can lead to all sorts of misunderstandings. Someone could get ‘urt.

Eventually I managed to pick out a few more details and grew certain in my judgement. It had a clear demarcation between dark folded wings and pale flanks, as if wearing a tailcoat. While neither winchat nor stonechat can match the wheatear’s slate grey to pale-buff contrast in this regard, the whinchat is the more contrasting of the two. As better light fell on its head I was also able to make out traces of a pale eyebrow and an orange chin. Not just a whinchat, but a nicely coloured male, though evidently some way into its bedraggling moult.

Moments later — evidently unimpressed by the level of threat I’d turned out to be — it flew straight back towards me, veering off to the right only at the last moment and landing a short distance away on the concrete rim of the reservoir. It was indeed a lovely male whinchat, and in far better condition than it’d appeared from a distance. Its wide, bright, bushy eybrow framed its oddly placid, unsevere expression — a more relaxed bird than the sum of its parts would suggest.

It scampered ahead of me as I walked on, before eventually flitting over the water in an arc to rejoin the path behind.

I think I was talking to the bird, but it might just as well have been myself.