A mist of midges met me today on my early morning visit. Coronavirus has meant the reserve has been shut, even to permit holders, until 10.30 am, but that has recently been relaxed. It’s the first time for several months I’ve been able to explore it before the birds have a chance to disapear elsewhere. Not that I expect to see anything of any great note, but it’s stil nice to experience the calm, empty pathways in the relatively cool, fresh air.

I was greeted, in the same overgrown scrub I mentioned yesterday at the base of Lockwood reservoir, by a cheerfully rattling Sedge Warbler. I’ve not seen one at this spot before and its highly conspicuous, hyperactive displaying hints that it might be a late-arriving male, playing catchup in establishing a territory.

The superpower of identifying birds by their songs and calls has many mileposts along the route, and distinguishing between sedge and reed warbler songs is something of a rite of passage. They both tend to sing from reedbeds or other damp undergrowth, and deliver a superficially similar series of chuggs, rattles, whirrs and whistles, but are altogether different in mood.

I like to think of the sedge warbler as an overexcited Californian teenager recounting, in leet speak, the story of bumping into a celebrity at the mall, overexcited and running a mile a minute — “Ohmigod ohmigod ohmigod, it was like, sooooo, ohmigod ohmigod, but srsly…”. The reed warbler is far more composed, rambling and thinking out loud at a more sedate pace. Like Columbo.

Sedge warblers are also more prone to throwing in more musical phrases — whoop-like whistles and clear one note trills — though they never form into anything resembling a tune. If you’ve ever watched a military drummer improvising around the rudiments it’s a similar effect — impressive, virtuosic, but more barnstorming than beautiful. It has something of the organ grinder churning out their inane, repetitive gurglings too.

But this morning’s little male charmed me nevertheless. Less skulking than most of its brethren, this one perched on tall sprigs of cow parsley, burdoch and teasel, interspersing these pedestalled performances with short display flights. Unusually grey (I tend to think of them as being a quite warm brown), it stared at me with its fierce cream eyebrows puckered above its shouty beak.

I left it to its unkempt patchwork quilt meadow and climbed up to the reservoir. Pete was out early too and we stood discussing the lack of locally breeding peregrines this year, and listened to a song thrush perched midway up a pylon. It seemed to use the network of metal struts as an amplifier. Or maybe it was the quiet morning atmosphere that made it seem louder.

Up at the top of Lockwood I heard yesterday’s lesser whitethroat again, but didn’t give chase today. A blackcap sang unconventionally from somewhere in the trees over the fence on Tottenham Marsh and I descended the bank to satisfy myself it wasn’t something more unusual doing a convincing blackcap impersonation. A crow sang — slightly softer, breathier caws — from another pylon. A tern flew low overhead “ki-kyaaa”-ing, and a nearby grasshopper sang in time with the lesser whitethroat and the trill of a wren. I sat down in the grass to enjoy these sounds to make one sit and wait. Black-headed gulls circled high above, catching insects like enoromous, clumsy white-winged swifts, their flight feathers translucent in the sun.

I did not find the blackcap, but walking back I heard another lesser whitethroat — perhaps they choose to sing in the mornings only — and saw another sedge warbler fiercely patrolling his little patch of nettles. A pair of goldfinch flew up from the weeds, their bounding flight oscillating erratically like notes on a musical stave. A deep-chested female sparrowhawk pumped its mid-moult wings powerfully a few times and circled back round to the woods, with perhaps more chance of setting eyes on the birds than I had. 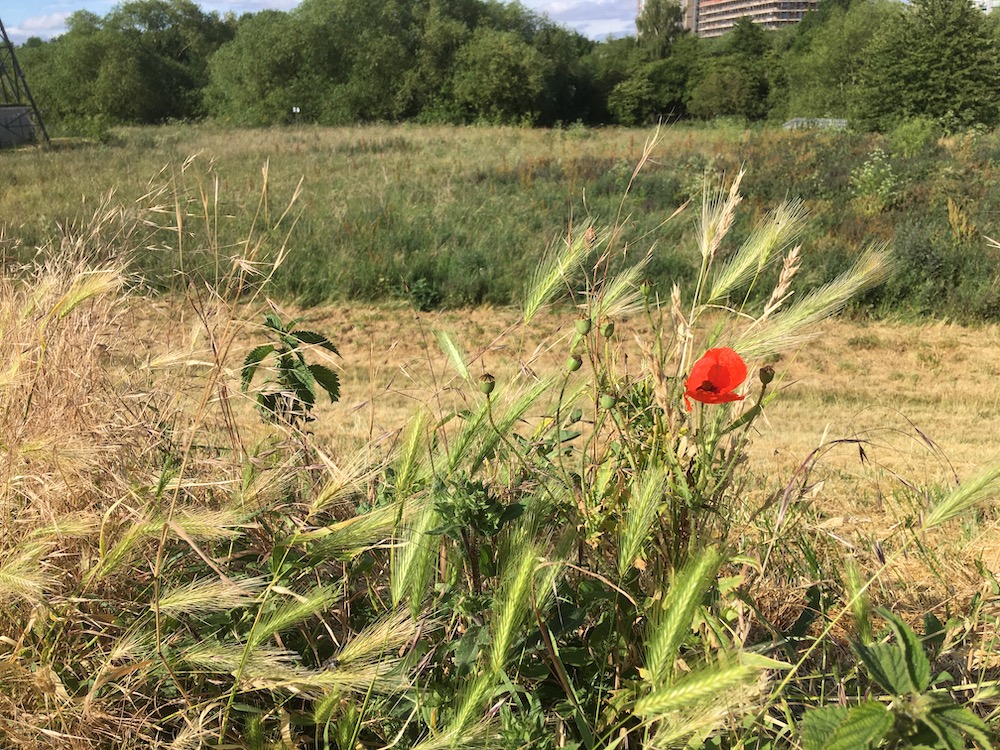