How should I proceed?

Four days have gone by since I last wrote, a hitherto unprecedented situation.

Should I begin, as Dylan Thomas saw fit, at the beginning, and work my way forward from Saturday morning to Tuesday afternoon?

Should I devote my scribbling to today only, it being the one day of the four that inspired a keypress or two?

Should I bolt and stitch them all into a single composite Frankenstein’s day, aiming at perfection but risking a monstrosity?

Freedom relished, I ventured out — force of habit — at 6 to see if anything had materialised on Lockwood. I looked forward to not noting it down and not finding interesting images with which to describe it. Nevertheless, a few lines found their way past the imperial guards of my fingers:

Out towards Tottenham’s football ground, returning this morning midway up the engine house pylon, plucking a pigeon while another — most likely its chick — looked on, screeching, from a few struts up.

Highlight of the morning so far, following a slow circumnavigation of Lockwood. Arriving at 7.15 I trotted along until I caught David and Dave, then slowed to their sedate amble. The skies devoid of swifts, we counted linnets (30), starlings (40), egrets and common sandpipers (around 8 of each) and made desultory attempts to pick out yellow-legged gulls among the mid-reservoir flock. Twice I was fooled by waterside lumps of mud taking on the horizontal teardrop shape of a sleeping wader’s body.

Perhaps the previous evening’s successes had given me a little too much succour. A juvenile dunlin of my very own cowering in the lea of the meshed rock wall poking out from Lockwood’s receded water. The lake had clearly left plenty of food behind in the thick strand line of fetid algae. I watched my dunlin find and tuck in to morsel after muddy morsel. Wondering on, I frightened a redshank into fleeing across the water.

Two of the less frequent waders in one sitting. Lockwood can be an inconstant host, but with ‘edges’ like that, definitely worth a repeat visit in the morning.

As Eugene approached we, like police around a cordon, conveyed the disappointing news that there was nothing to see. Aside from a blackcap and the nervous alarm calls of skittish common sandpipers, very little to hear either.

We walked on, past the aforementioned peregrine and up the central path, where a woodpigeon, by dint of a good covering of elder leaves and a collection of over-eager imaginations, managed to convince us that two lesser whitethroat were in the bush. Well played, woodpigeon. Well played. Though beneath the central pylon a few plucked feathers of one of its brethren lay on the ground. On balance, I think the humans win that one.

The silence continued all the way around the reserve. An occasional burst of Cetti’s warbler song, the odd farting house martin (and a few distant swift clinging on to summer), and the occasional wren. No willow warblers, and only a handful of chiffchaffs. But today was not a day for the songbirds. Funnel web spiders glowering from their vaulted ivory caverns in the gorse the most intriguing sight, and the most frequent, and delightful, sound being instead the market stall bickering of the terns overhead. The youngsters in particular make a sound like the last dregs of a ribena carton being desperately slurped through a straw with a hole in its kink. 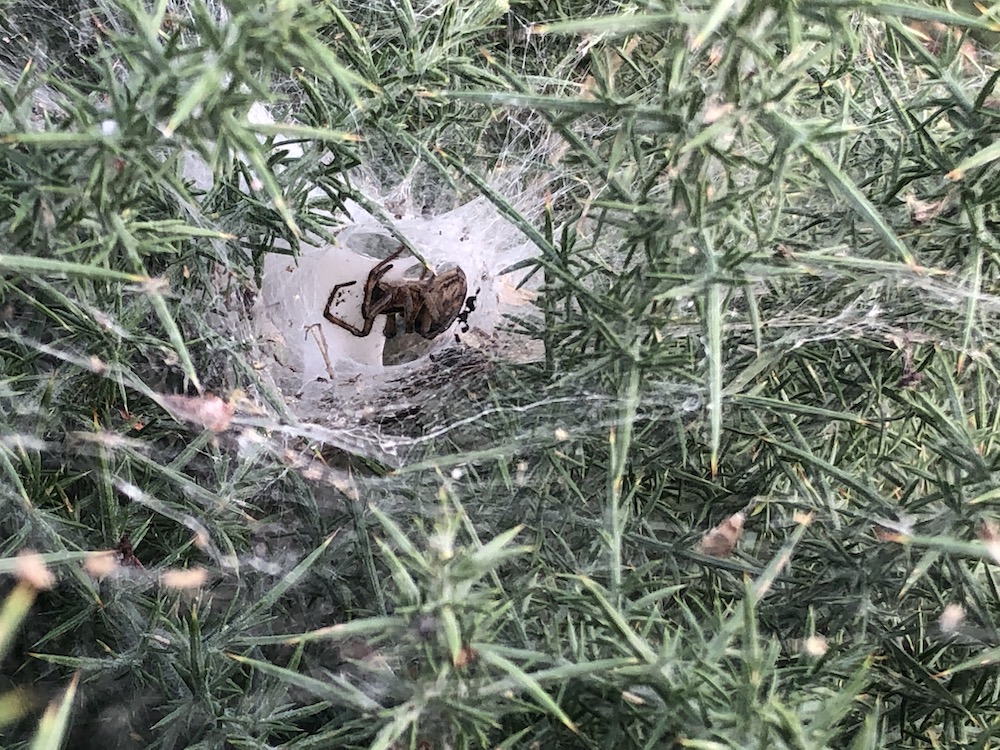 Which I heard today, but noted yesterday evening on my way to the south of West Warwick on another futile wild bird chase. This time the wild hypothesis being Temminck’s stint, and the result of the experimental observations being a remarkably steady-bodied common sandpiper. Those small waders — even those as far apart in the book as the calidris stints and tringa sandpipers — can all look alike in the right conditions. With the right lack of rigour.

Not so the Black-tailed godwit, who is almost always a black-tailed godwit. Brick red below and a scalloped dark grey above, lightening in winter to platinum pale, but always that pink and black sword bill, the white lightning strike bar the length of the wing, and the swan on stilts elegance that perhaps only the avocet, among british waders, can surpass. And, as I observed today, all packed into a bird not much bigger than half a coot.

A cheap tick this — re-emerging by bike from four straight hours of meetings to arrive at the East Warwick waterside, watch it feeding (oblivious of the hoardes of people out and about today) for a while, and then return to the home office to wind back up again.

At the weekend I might venture properly out of London for the first time in months, to visit Oare Marshes in Kent. There you can find one of my favourite intimate wildlife spectacles — hundreds of godwits all huddled together in the shallows only fifty metres or so from the roadside. They make muffled little chattering sounds like a congregation hushing as the vicar walks in.

It’s really quite the thing.

How’s that for structure?