This evening it felt strange not to be walking in the evening sun. The first time in weeks the sky has not been blue. Earlier in the day, on my first walk, cotton-wool clouds hovered over the lakes beneath a whited-out layer of nimbus, letting loose the odd drop of rain. By the evening the rising wind had strung them out into a monotonous blanket of quilted greys.

I had high hopes for today, but the weather didn’t deliver. Specifically, it wasn’t as bad as I’d hoped it would be. Rain and wind of the right sort at the right time are the birdwatcher’s most trusted allies.

Despite being a birdwatcher, of varying levels of dedication, for most of my life this is only something I’ve learned in the last couple of years. My time at Walthamstow is the first time I’ve had much to do with other birdwatchers as an adult.

Birdwatching has generally been something I do, in part, to get away from it all, which includes other people. However, visiting the same local patch week in, week out means I now cross paths with the same crowd regularly, so stopping for a chat with other birdwatchers is now a welcome part of my life. Much of the conversation, as you’d expect, is about birds — “Much about?” is the stock conversation starter — but even within this narrow sphere there’s much variety to be had.

From the people I’ve got to know on the patch I’ve learned so much more of the craft of birding than I ever figured out alone.

I’ve learned to rise early on October mornings, particularly with an Easterly wind, and look for thrushes and finches flying overhead, nearing the end of their nocturnal migration from Scandinavia and other parts of continental Europe (this is known as vizmig — “visible migration” — season).

I’ve learned that the arrival of most summer migrants can be pinpointed almost to the day, with each species having a very precise time at which they return to the breeding grounds. Someone will post on our Whatsapp group, “Looks good for Whinchat tomorrow,” and, sure enough, one will turn up the very next day in the Bombcrater field.

And I now know that rain and wind are not the curses I once considered them to be. At the right time of year, particularly during peak migration periods, a band of heavy rain can cause unexpected migrants to descend. They would rather pass by high overhead, with the great metropolis well out of earshot, but tired wings and waterlogged feathers force them to seek refuge at the nearest expanse of water or undergrowth. Add in a breeze from the right direction and the chances of a real rarity turning up are greatly increased, outweighing the negative effect wind tends to have on the mobility, and hence visiblity, of most small birds.

But today did not deliver. The brief heavy rain was localised enough for any migrants to avoid and — monday’s osprey notwithstanding — it is getting a bit late in the season to hope for many migrants anyway. (That is, after all, the whole point of this blog).

How strange it felt not to walk in the evening sun.

How strange it felt.

I used to carry a notebook with me everywhere I went. Some day I fell out of the habit, but today I began again, because once more I have a reason to take notes. Which gives me more than filled pages and an exhausted pen.

It gives me a reason to take note.

To walk slowly and to see.

Unlike a journalist, though, I have no editor, so I can share the all that I’m seeing, whether it build narrative, establish point of fact, expound a position… or not.

I can tell you about the Blue Tit nest I found by slowing to investigate, theorising about and triangulating the calls coming from an elder bush. Also trying to catch a whiff of the fading elder blossom, overshadowed by the stink of rotting algae coming from the low water’s edge.

Low water and algal bloom causing the death of more than one fish (though I guess fish are always going to die sometime - perhaps it’s unfair to presume the algae is to blame?). A crow tweezed the pink flesh from the bones of a dead, washed up trout, tolerating my closeness as it enjoyed its gourmet meal. 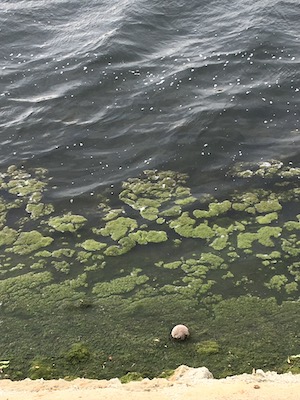 And a coconut — could it be the same one I always see? — bobbing up and down in the algal clouds, like a space probe marooned on the surface of venus.

I walked the gauntlet of fly-fishermen, sacrificing a micrometer from the sole rubber of my shoes in order to scuff the gravel with enough noise to alert them of my presence. It felt like they were trying to intimidate me, each one casting of with a few whips of the rod back and forth no sooner than I’d passed by. Perhaps I should kneel before the glory of God next time, like Indiana Jones.

52 Greylag geese, including at least eleven youngsters (the eldest of this year are hard to separate from the adults already), drifted away from the bank as I approached, leaving behind their muck and some discarded quills. One of these days I will tell you about one of the most beautiful things in the world. The geese know what it is, but it is not yet time for their story.

By this time I was walking along the far end of the unromantically named Number 5. Reservoir.

And a small murmuration of Starling, some 200 strong — the kind that gather as soon as the young have fledged — settled and resettled along the reservoir’s bank, clinging in bunches to the ground and the air like a poorly behaved, chatter-whistling sheet of clingfilm. 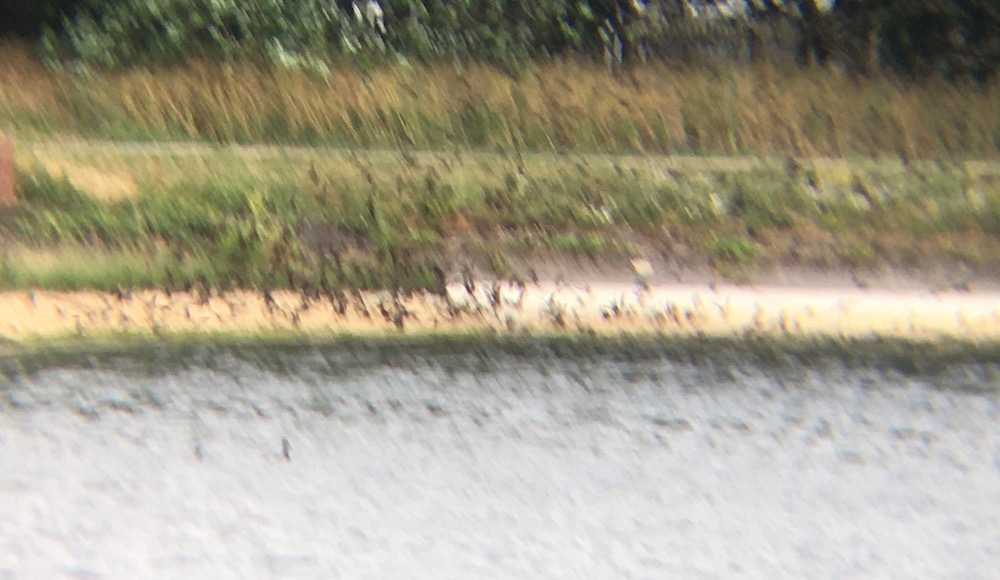