The warm purple-grey light fills the space between the storms perching on the city’s rooftops. “There is such rain”, a friend texts me from a mile or so to the south. Up here I sit in the sun on the grass cuttings — dry and getting dryer — with my back to the water and watching a bush.

The railway line separting East and West Warwick reservoirs has the recently surfaced, modern air of Germany about it. But the verges are as brambly and untrammelled as any dilapidated corner of the isle. Hawthorn bushes grow at intervals. One of the earliest plants to flower in late winter, their berries — or haws — have been swelling since late may, and are beginning to blush red.

The bush I’m watching is the marriage of a hawthorn with a small cherry tree, with scarlet fruit — probably not as sweet as they look — hanging from its highest twigs. To its right, behind the galvanised steel fence, is a small depression which a large bramble thicket, oozing like tentacled lava, is slowly overrunning. To its left the vegetation sits lower and less acquisative.

Sitting, or standing, and watching a bush is birdwatching at its purest. A bird is seen entering on the wing, or lets out a sound as it clambers about within, and the rest is simple; we wait.

We wait in hope that it will venture forwards not back through the branches. We hope it will stay for long enough in the open, or make a call distinct enough to identify the species. We dread the worst of all worlds — a furtive departure via the back door, leaving us for fools.

I say we, because often it will be a multitude of birdwatchers watching the same bush together, joining forces — two heads of eyes are better than one — in the hope of finding the bird sooner, if at all. This is the source of the stereotypical image of birdwatchers, all in a line with telescopes for eyes. But it is not so comical as the image might seem. There’s a calm cameraderie, and often a gentle mindfulness there in the scene.

And yes, I admit it, sometimes a little obsession and desperation.

But not today. There are few activities where I feel so in the moment and calm as when, by myself on a day when the weather makes itself felt, I wait for a bird in a bush to make its mind up what to do.

So sit and wait is what I do, conscious of the sunburn and sweat the surprising sun is drawing out of my neck. The small, pale brown warbler-like head appeared momentarily and then withdrew back behind a screen of leaves. With its dull browns, paler below, and a light dusting of a neutral foundation on its flanks I immediately think of garden warbler. I see leaves vibrate as it hops from twig to twig, but it does not oblige me with a repeat view.

A great tit flies in from the brambles to the right carrying a caterpillar in its mouth. The grub looks dark and spiny, a peacock butterfly perhaps. I thought only cuckoos knew how to deal with their protective covering of irritant hairs (by battering them inside out against a branch), but perhaps that’s a birdwatchers’ urban myth. The great tit descends from the outer twigs towards a point lower down in the center of the bush, where the well-shrouded trunk must be. I hear the squeals of greedy chicks

Large emperor dragonflies are quite numerous today. Every few minutes one zips between me and the bush like a javelin. I can hear their wings beating. True emperors of insects. Hobbies, those falcons who supplement their diet of swifts with dragonflies (or is it the other way around?) would enjoy the menu today. I wonder if I’ll get to write about them properly before the summer is through. Large white butterflies commute hurriedly across the railway line. Swifts are gathering above the reservoirs again. They love a muggy day.

A sedge warbler sits atop the cherry tree — a sophisticated outing for this bird of the dank undergrowth — and curses loudly at me. It’s warmer coloured than the bird of two days ago, a typical sandy base daubed with streaks of rich ochres. It has a fly or two in its beak and continues its griping as it flies into the long grass just behind me. It hops from stem to seedhead to stem before diving into some hidden hovel of a nest, and all goes quiet.

Has it been that long?

A tern flies overhead calling and a blackcap sings.

Behind me a small commotion is underway in the reeds. The Reed Warblers that cram themselves into the narrow reedbed are even more vari-vocal than usual. I can hear one singing behind my right ear, another directly behind me and several more birds to my left. A bed full of reed warblers, I realise with a smile, sounds like a group of men gathering, uninvited, to direct the reverse parking of a lorry. An uncoordinated chorus of steady, steady, plenty of room, plenty of room, back a bit, back a bit… the vehicle is reversing. When they arrived all at once in early May the reserve resonated like a football crowd.

The additional density of sound coming from my left is the work of a cluster of birds clinging to the same few reed stems. More congenial than the territorial scuffles I sometimes see charging through — causing more disruption than a bird their size should — these birds, I realise, are a young family. The father sings with its mouth full of grubs and the feathers on its crown raised in adamance. Terracota on the rump, autumn brown on the back and with as clean a white throat as any warbler who deigns to call itself “Whitethroat”, it, and its partner, are neat little things.

And the youngsters, slightly stumpier of tail and greyer of back, have the same dusting of off-white make-up on their necks as the bird I was waiting for along.

But still, maybe I should wait just a little longer. 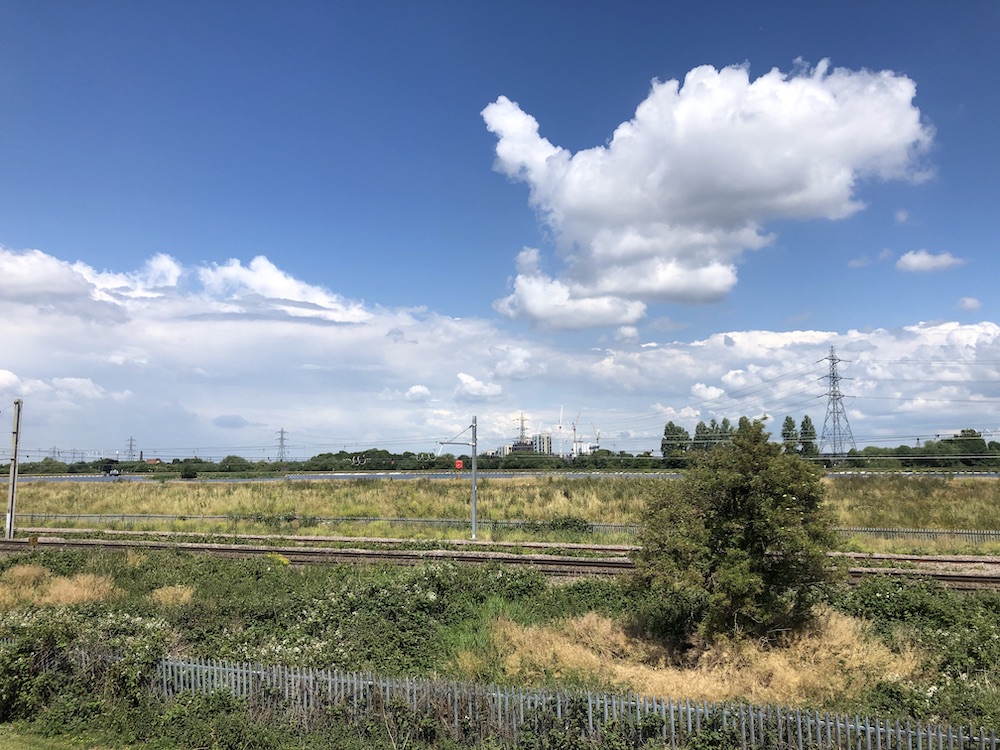