The subtle signs of the arrival of autumn are everywhere today. Sand martins who, let’s not forget, have been in the country since early March, are migrating south already, and a steady trickle flows from one reservoir to the next and out the far end. The swifts, as always, are too numerous and whirling to gauge any kind of trend in their movements, but elsewhere a southward passage of epic proportions has already begun. Today they do seem to move slower and more thoughtfully though. Two weeks on from the longest day, and they can already feel that the peak of summer has passed.

The number of tufted ducks is rising fairly rapidly. Crescent-shape flotillas of up to about 50 birds are congregating. Over the next few weeks these will grow to large rafts of hundreds, staying well clear of the shore while they moult. The paths open to the public have made their biannual switch owing to the heronry no longer being the most sensitive nature spectacular on the reserve; the ducks’ favoured reservoir to gather on will be largely untroubled by people for the rest of the autumn.

The starling flock is also growing in size, and I’d estimate it’s now at about 120 birds. They never get bigger than a few hundred here, but even at this modest size exhibit the characteristics of the large murmurations that beautify our dull winter skies with their coordinated, animated performances. Today they stretch out into a narrow stream, which recoils back into a tight ball, like wine pouring into a goblet. Their wing beats make a sound like a moth trapped in a lampshade as they take off en masse from their tree.

Perhaps more a sign of the heightening of summer than the nearing of autumn, the giant exotic thistle on the lockwood path is no win bloom. Its flowers are like neon sea anemones, their violet filaments creating a shimmering effect that’s difficult to capture in a photograph. The more ordinary thistles and teasels are also coming into bloom, as if they are following the orders of their empress to reproduce. I also come across a family of tame fox cubs, another sign that summer is well advanced. 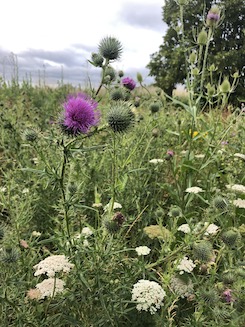 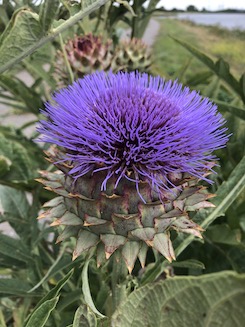 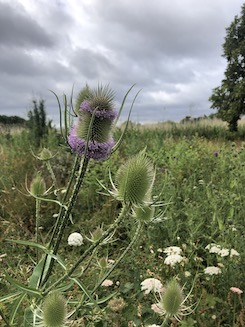 A tern lilts along above the smaller of the two overflow channels, searching for small fish (the better to feed the tiny mouth waiting back at the nest). I saw one earlier with such a fish in its beak being harrassed by a herring gull. Despite the tern’s super streamlined build, they fly surprisingly laconically, and it tried to dodge rather than outrun the gull’s challenging bursts of speed, calling irritably at every successful outmanoeuvre. Eventually the gull grew tired and departed to attack a heron instead. This new tern I watch lilting along turns aggressor at the top of High Maynard and finds the speed to harry a gull for no apparent reason.

They’re all as bad as each other.

A bird I at first mistakenly identify as a crow heaves into view. A dark silhouette against the cloud-whited sky, it flaps determinedly against the wind, before locking its wrists and turning with the breeze. It reveals its true form, with pointed wing tips and splayed oriental fan of a tail, and I realise that I’m looking at a Kestrel.

It circles back to obtain a headwind, finds the perfect bite point and hangs still in mid air, with nary a flap of its wings. Most birds, if pushed, can exploit an oncoming wind to hover for a short while. Cliff-nesting seabirds are particularly good at it and will often hang in the updraft before landing. Today, in fact, I’ve seen both a herring gull and a swift actually flying backwards, seemingly with intent, though with a decided lack of grace.

But kestrels have made an art form of it. Like a mime artist performing the immovable suitcase trick, their head seems anchored to a specific point in space and their spread tail and fluttering, girder straight wings act as stabilisers to hold it there. Today the wind is strong enough to not require much effort and its only on a couple of its attempts at maintaining a stationary position that it performs the classic, active hovering, fluttering flight.

With each loop back to find a new spot to look down from, it gets a little further away. Always high up, I can make out the rufous colour of its back, and the impression of a black tip to its long tail, but is still too silhouetted to be able to tell for sure if it is a neat, grey-headed male, or a slightly dowdier looking female. As it recedes it become all shape and behaviour, the circling, the hovering, the pointed wings flicked up into winglets at the tips, and the fascination with the long grass below and the voles and mice that scurry about within.

I take the causeway between the Maynards for my daily constitutional swift bath, standing still as they zip by on both sides. I stand stock still and try not to flinch, feeling like a little scamp playing chicken with passing cars (something I never did — a boy in my class was killed doing it). One flies right at my chest, veering away at the last moment. I look directly into its eyes. I wonder what it thinks of me? 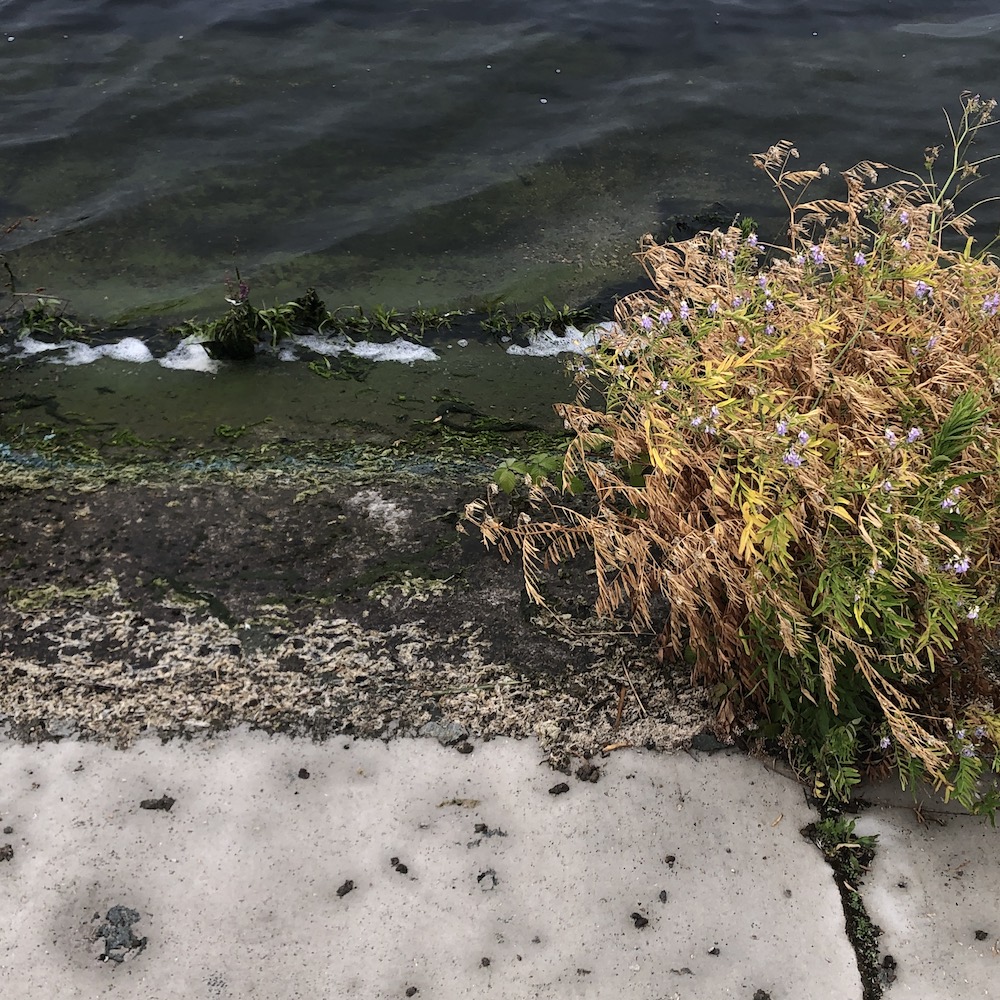