A warm, humid overcast day today, with a breeze that failed to refresh. I missed out on the morning’s rain and had to make do with a stroll through its muggy slipstream.

I cycled up the main track, irritated by the flies kamikazeing into my face, and around the top of East Warwick. I passed my bike through the gap where one of the slats of the wooden fence had been dislodged. Locking it up I saw that the landscapers’ vans were in.

Two young men directed remote controlled sit-down mowers around the banks of West Warwick. Mowing long grass on roadside verges is often deemed needless environmental vandalism, but I have it on good authority that the vegetation around the reservoirs must be cut back regularly in order to avoid cracks in the dams growing unnoticed.

Around the top of the reservoir at least four reed warblers sang their glitchy starter motor songs from the narrow strip of reeds. They really do cram themselves in. There will be four neatly woven nests bound to the reed stems, with tiny eggs or wide open beaks within. The reeds rustle in the breeze.

A single swift charges over the water; its brethren circle high up in the sky despite the abundant swarms of flies. The sun breaks through the clouds. I am wearing jeans and its cloying warmth is unwelcome.

Dozens of slim, electric blue damselflies glide their horizontal bodies out of the way of my strides. They look like graphics from the film Tron. It’s ard to focus on them as they glow and dissipate inches above the grass.

It’s a day to gaze down into the grass rather than up at the sky.

The swallow of four days ago is absent. A thrush, a robin and a blackbird sing anonymously from the trees, and the same juvenile pied wagtail, adrift from its family, still haunts the water’s edge. Across the water I hear the excitable ululating song of a little grebe.

A cloud of white flowers, dog rose I think, encrusts a large shrub, and over towards the railway tracks the ever-thickening bastilles of bramble are also in bloom. We think of them as thorny, aggressive, impenetrable and, later, country kitchen berry-laden, but the pink-white bramble flower is little noticed. They are everywhere these weeks. At the waterworks on monday they were crowded with bees of all kinds humming with honey.

At one edge of the thorny citadel a few birds chatter nervously. The sounds have the clipped roundness of a finch, but I’m unsure which. I see one dart into the open, with what looks like a white-based tail on an otherwise bland faun body. Through binoculars I see that the white is bright yellow and I am looking at a young Greenfinch, yet to gain the leaf green plumage that gives them their name.

It’s followed by another three birds, the bright yellow flash of their tails seeming out of place. Why, if they are drab and camouflaged to protect their young, unworldly bodies, is their most conspicuous adult feature preserved. Other than that they’d be non-descript in the extreme, identifiable only by their silly big heads.

I hope they make it to adulthood. The greenfinch has taken a tumble in recent decades. Formerly one of our commonest birds, changes to farming methods followed by the spread of a deadly virus we can all relate well to mean they are now on the British red list; one of the british species of highest conservation concern. They seem to be doing better locally, after a few particularly lean years. Earlier this spring males circling the Lea Bridge paddocks on undulating, front-heavy aeronautical flights while singing the intro to “Sorted for E’s and Whizz” were a feature of many mornings. And they wheeze their other one note descending song near the wetlands Engine House most days.

On the final stretch of my circumnavigation I reach the edge of the mown grass and find a spiny black caterpillar — a peacock butterfly I think — crawling along. I pick it up, throw it deep into the safe zone and walk on, counting the reed warblers as I go. 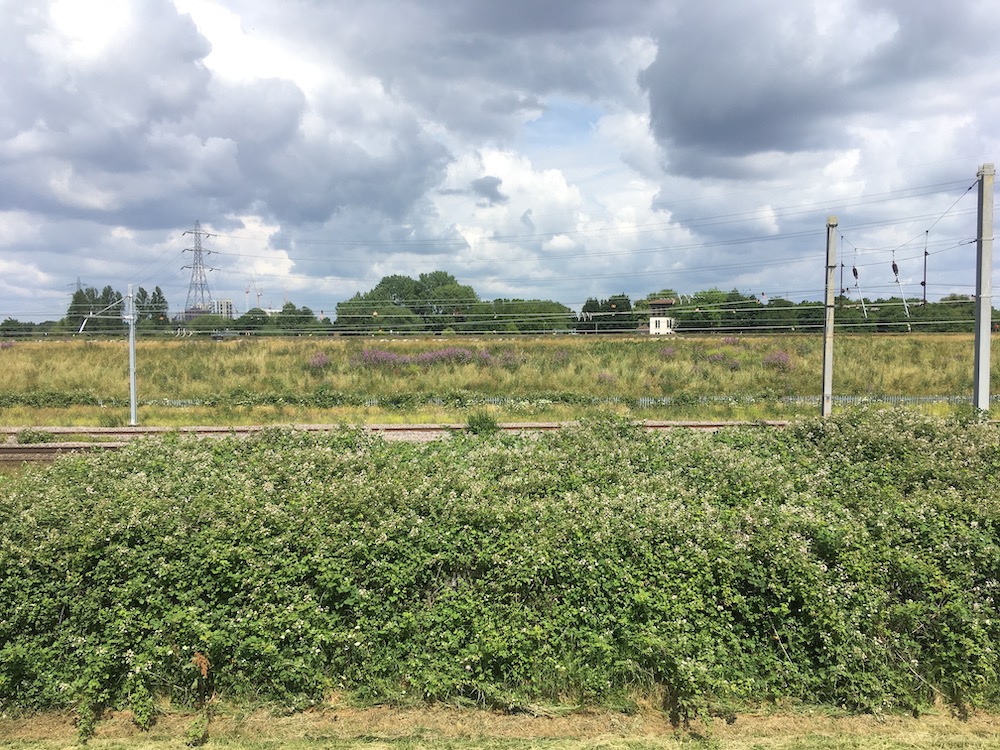