The last few slivers of summer bird life continue their slow drift southwards, slinking out of the country with barely a wave goodbye.

Returning on friday from a week’s holiday in Wales and other northern haunts I saw the distressing message in the birding group that the tern colony had upped and left in the night. I saw it with my own eyes yesterday — the breeding raft a ghost town, and the sky no longer a constant bickering bazaar of angelic birds. A handful still speckled the skies over Lockwood, but the character of the place has changed considerably. Combined with the blustery autumnal weather of the past few days, it feels like a decisive step towards winter. Whether sitting looking out at the raft, or traipsing around the reservoirs, a colder, lonelier season of birdwatching has arrived.

Swifts are also delivering their last hurrahs. Only a few small groups passing through. Unlike the hundreds of house martins and dozens of sand martins still patronising our increasingly sunlight-challenged city. They will take another month to vanish. Methadone to wean me off the combined spectacle of terns and swifts demonstrating their individual aerial flair.

After a week largely spent sitting and driving I got back on the bike today for an excursion slightly fut=rther afield, up to Gilberts Slade woods, where Epping Forest reaches a thin finger in towards Wanstead and tickles its bare belly with stands of impressively straight-trunked, mature oaks, haunted hornbeams and a few sun-kissed glades.

Under the trees I came across the woodland specialities of treecreeper and nuthatch almost instantly, and nearby a goldcrest and a female woodpecker, with an extremely bright red undertail — I’m not sure if it was the particular light conditions or fresh feathers following a moult, but it positively glowed, like the Miss Scarlet piece in an old Cluedo set.

I paused in every slight clearing as I walked, as these woodland edges tend to be favoured by the flycatchers, redstarts and other rarer migrants that can drop in at this time of year. It eventually paid off with the discovery of a Spotted Flycatcher sitting proudly in the thin branches atop a dead birch tree. Not moving, “I’ve been expecting you,” it seemed to say, eyeing me with a supercilious composure. Eventually it flitted off, not treating me to a display of its flycatching prowess.

So I continued on towards Wanstead Flats, a great expanse of open grassland, scrub and small patches of woodland that’s always good for late summer migrants. En route I saw a Hobby dashing overhead — perhaps another for my “last of the summer” bucket. I wonder if it was one of the birds we’ve been seeing regularly at Walthamstow. Wanstead’s about three miles away — how big are their territories?

Wanstead didn’t disappoint. It’s a remarkable habitat to find in a city, almost reminiscent of a mediterranean headland, with plenty of scraggly undergrowth for the skittish warblers and friends to find refuge in. A couple of years ago a big fire destroyed much of the area I was searching through, but it’s recovered remarkably well. Great warped, bare black branches rising above the relatively puny new growth stand as a reminder of how overgrown this place used to be.

Within a few minutes a whitethroat stuck its head out into the open. While not a rare bird, there is something quite mystical about finding one at a migration hotspot. Where did it come from? Where is it going? The humdrum neighbour infused with all the romance of a year abroad.

Next up the surprise of three siskin — more of a winter visitor usually — landing briefly in the birches before — perhaps realising they were unfashinably early — leaving almost immediately. Then back to the more usual suspects — two whinchat sitting tamely on the broom as dog walkers passed within barking distance, and both a lesser whitethroat and another whitethroat joning them. A little further along three more spotted flycatchers put on more of a show than my previous find, darting between perches, but seeming more interested in chasing each other than in catching flies.

A couple of pipits flew over, calling weakly. There were supposed to be some tree pipits — a Wanstead speciality — about, but the insipid seep seep calls told me these two were meadow pipits, one of our commonest birds (though on the Berwyn moors in Wales last week I saw such large numbers of them that even the humble, brown streaked meadow pipit managed to create a spectacle). Just a moment later and tow more pipits flew overhead, calling more stridently, and circling a few times before landing in a nearby oak. Training my binoculars on it I saw the fine streaking on the sides and the pale belly that told me it was the sought after tree pipit.

Pipits are among the most difficult species of bird to identify. They can barely even be said to be variations on a theme as “small, brown and streaky” isn’t much of a theme, and the variations require a watch-maker’s eyeglass to pick out. 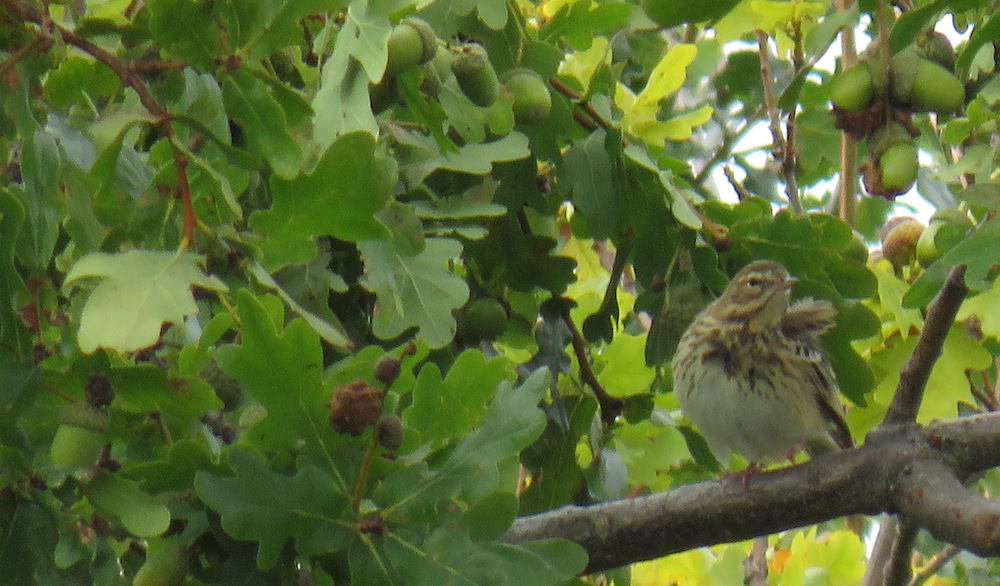