This evening a fuzzy walk seen through unslept eyes. A herring gull on the island stands on legs so green with pond scum I can almost convince my tired head they are the yellow limbs of its rare, European cousin. But they are not.

As the reserve closes its gates to the public I skulk down the maintenance steps, under the railway line and emerge into the still searing sun shining down on West Warwick. The reed warblers are silent, but the sedge warblers are oddly active, joining in my evasive game of hide and seek, making little ruler-on-desk vibrations as theytiptoe through the marshy grasses.

A walk all around it gives intimate views of a few of the shyer waterfowl, congregating here away from the footfall of the common man. A few gadwall — mid-moult I imagine — dabble their elegantly proportioned beaks in the shallows, and most of the greylag geese float in a group of about 40. The young birds now have the wolverine scratch ripples on the side of their necks, but etched into a fluffier feather substrate than their parents.

The little grebe chicks here are almost fully grown. While the adults all too often look like plump balls of fluff with a head glued on, these youngsters are slim and athletic; quite the opposite dynamic to most birds. They also exhibit some strange behaviour, as if they are still learning to be grebes. Which, of course, they are. One continually glides about the lake with its neck outstretched, genuflecting from time to time to inspect its breastbone. Another, on seeing me approach runs across the water like a coot in full aggressive heat, but has not quite mastered stopping and skips a few tiems off the surface like a pebble, before bellyflopping to a halt.

Gulls of all species are out in force, circling on the thermals that today appear to be rising above the Warwick reservoirs. This year’s lesser black-backed and herring gull fledglings do seem to have gotten the hang of flying already, and rise and fall with gusto and apparently very little purpose.

Lower down, dozens of Black-headed gulls circle above the water. They are hawking for insects. Nowhere near as gracefully or skillfully as a swift or swallow, and their use of dangling feet to aid sudden decelerations is quite ludicrous, but they pull it off. It isn’t what one would expect from a bird more redolent of stealing chips and picking at washed up rotting fish, but the black-headed gull has very little in common with its larger, true to stereotype cousins. Gull experts will probably shoot me for getting the detail wrong, but they’re happier stood in a field eating worms than floating far out at sea, waiting for fish offcuts to be thrown from a trawler. They’re the quntessential gull of the school sports field, spectating on reluctant games of rugby played in the sadistic horizontal sleet of a PE teacher’s winter dreams.

They are a good deal smaller than most other gulls too, and can sometimes be mistaken for a tern as their flight has a similar pointy-winged, fluttering quality. They often nest alongside terns too, eschewing their bigger more aggressive relatives, and both tern and diminutive gull gang up to repel any aggression from the big brothers.

Though they can be their own worst enemies. The dappled brown, frizzy-downed chicks do like to wonder, and despite the wire mesh surounding the tern raft somehow find their way to the water’s edge. Once in, they struggle to climb out — the island floats about mattress-high, and the chicks cannot make the jump back up. I’ve watched a few really small chicks who have probably drowned eventually, though this is not the fate of every one — two three quarter grown, flightless and scraggle-headed chicks currently take refuge on the reservoir’s East bank. At the approach of humans they paddle a little way out in to the water and one or more parents make a real show of dive bombing and shouting blue murder. Probably only a few days away from being able to fly but, with all the fox cubs to feed in the neighbourhood, I don’t fancy their chances either.

If they do, however, come of age without mishap, they will do so in style, with sandy coloured shoulders and caps, looking every part the country gent. One or two have already made the leap, and hang out on the same posts as the older gulls. Despite their dapper plumage they still look like 12 year old delinquents hanging out at the bus stop with the proper teenagers. Full of back chat, drinking cheap cider and swearing profusely at passers by. 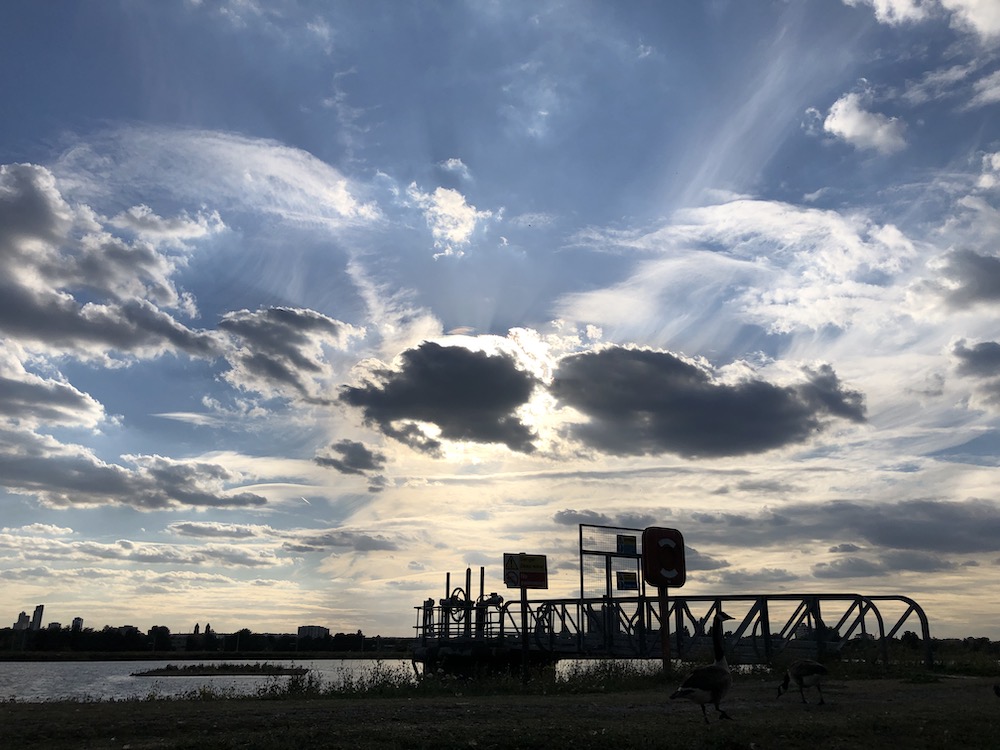