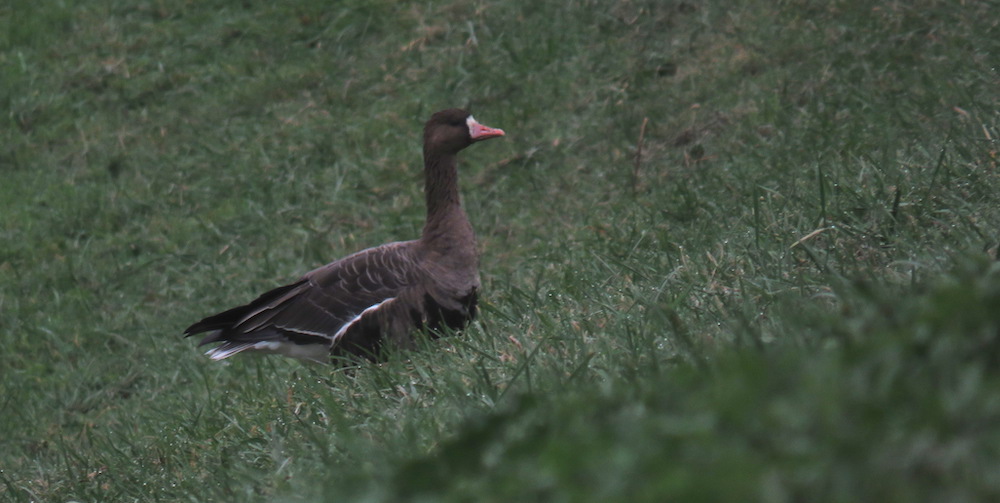 I wish I could tell you that I’ve missed writing this bird blog but, in truth, I haven’t. It’s curious how something can fade from one’s daily routine after forming a crucial part of it’s scaffolding, and be forgotten in little more than an instant.

It won’t be the first or the last wholesome activity to have dropped well out of orbit during this second dreary lockdown. Back in March, for instance, my exercise routine peaked with a practically daily dose of core strength workouts, but now I mainly lie back on the sofa watching Jonathan Creek repeats. I aim to slither through winter.

Truth be told, it wasn’t until yesterday (I write this on the first of December) that I thought of this blog once more.

And all for the love of a goose.

Over the past few days I’ve spent an inordinate amount of time birdwatching. Taking a break from the drudgery of the poorly daylit home office. Not even the appearance of the first woodpecker of the winter at my bird feeder could assuage me of the firmly held feeling that hell is, despite what Sartre might thinnk, a distinct lack of people and a consiparacy of neighbouring terraces and trees to block out the light. Made worse by the fog. 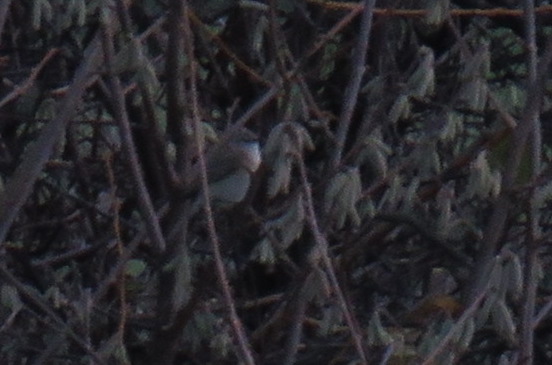 But birding loves a fog, confounding late autumn migrants’ attempts to find the correct wintering grounds. Nothing too spectacular arrived over most of the long weekend, although I did, on Thursday afternoon, find a ghostly pale chiffchaff I then spent most of friday traipsing around the misty canalside woods attempting to refind, in the hope of hearing it call in a high-piteched russian accent and confirm that it was of the siberian variety.

I didn’t plan on getting up early on Monday to do the rounds, but the arrival of an early parcel from Amazon (a birthday present from Karen, whose mum is a regular reader I believe) at 7.30 coincided with a period of light sleep so I ventured out anyway, arriving at the reservoirs by the time gates opened at 8.

The morning fog, draping the new builds at Tottenham Hale and Blackhorse Road in mystique, formed the setting for a predictable morning’s birdwatching. Along the entrance path, with coots on the lake, moorhens sprinting for cover and the odd black-headed gull nonchalantly swooning through the air, a variety of tits peeping from the bushes as I approach the bike rack, and a variety of dark and light specks scattered across the still surface of Lockwood as I gained the top of the steps up its bank, and looked out to count the cormorants resting on the dishevelled raft anchored near the south end.

And nothing more alluring as I walked up the west bank. No sight nor sound of the yellow-browed warbler that’s graced the reserve for about the last month, and no visible migration of thrushes overhead. But there was this goose…

Geese are, from an identification standpoint, like the warblers and waders’ big cousins. Many different species with broadly the same colouration and behaviour, with clues to their precise species lying in subtle nuances of behaviour and tiny colouration details. Birdwatching is a hobby where practice makes perfect, but geese (aside from a few commoner species) are not widespread enough to afford that kind of practice.

So when a goose I’d evidently frightened flew up from the bank and flew past on its way south before I could so much as get my binoculars onto it, all I had was an uncomfortable sensation that what was fading away into the fog was no journeyman goose. It appeared small, with a short, dark neck, and the wings lacked the light grey flashes that are so obvious on a flying greylag. Beyond that I did not have the chops to tell what exactly it was, although I guessed at pink-footed.

It flew on south, tracing a broad ark near the electricity pylons. I assumed it had gone beyond them but then, joyfully, it circled back, and after a couple of loops around the Maynard reservoirs came down somewhere around High Maynard.

I set off as quickly as I could, not even pausing to look for the yellow-browed warbler when it picked that perfect moment to crave attention with its high pitched swanee whistle. Roudning the top end of Lockwood I slunk down from the top of the bank to the track at its base in order to conceal my silhouette, but creeping up on High Maynard I was confused to find no geese whatsoever.

Scratching my woolly-hatted head I climbed the bank again. Distracted by the antics of the kiss-chasing pied wagtails, I almost stumbled into the goose, casually grazing with some canada geese it had adopted as family. Unmistakably, it was a white-fronted goose.

There is nothing more beautiful than the ruffled neck of an adult goose. Like the lines left in the fur of a hirsute cat by an affectionate owners slightly splayed fingers, they have the beautiful deep, soft, many-shaded strata that makes one want to plunge straight in. Who knows what genius angel designed such rustic but refined detailing, but they did well.

And the white-fronted goose wears this finery better than most. Somewhat toy-like, they waddle about like little Napoleons, necks held bolt upright and proud, tall foreheads emblazoned with a white flash giving them a proud, aristocratic air. Across their bellies a few messy transversal smudges of almost black incongruously muddy heir otherwise debonair appearance, but even this is carried off with the insoussiance of a prince caught in some compromising position, but having the temerity to complain about the intrusion.

It’s the first one I’ve seen since, at the age of seven, visiting Slimbridge nature reserve in Somerset. That day was arguably the true genesis of my birdwatching ways; spending all of a rainy October day running around the wildfowl enclosures, ticking off various ducks and geese of the world from the handy guidebook that listed them all. I am vaguely aware of seeing the geese there, in the wild part of the reserve, but so much time has passed it hardly counts as a proper tick. Nonetheless, I was bought my first proper birdbook from the Slimbridge gift shop, and to this day it still has the ticks a seven year old version of myself penned childishly next to the names of the birds I’d seen. 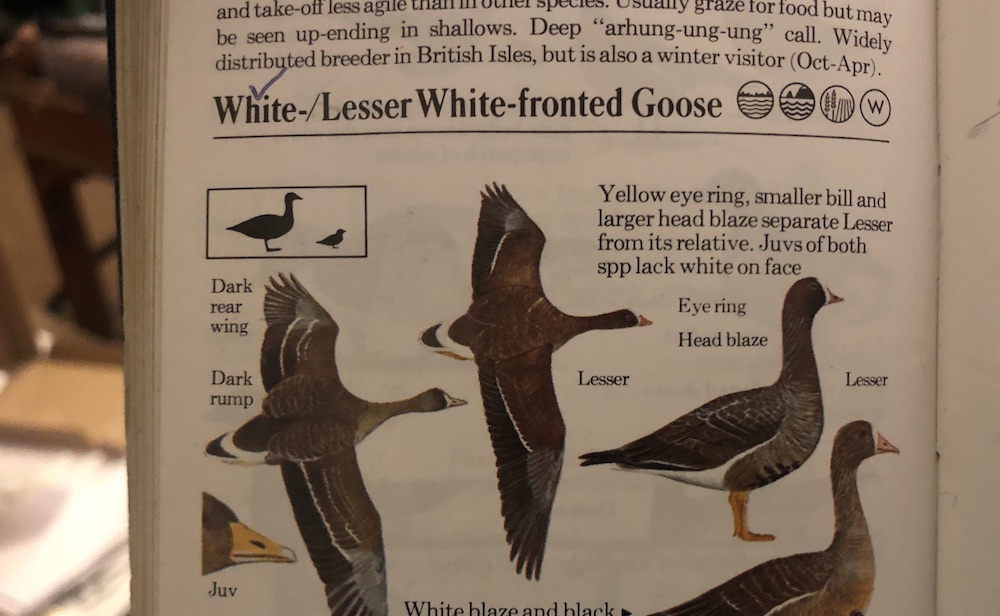 I posted news of the goose on the whatsapp group, to be informed that it was one of many that had turned up in unexpected places that morning, including one in Regent’s Park! It’s the first one to be seen at Walthamstow for around ten years, and someone informed me today that that one may have been the only previous record (though I find that hard to believe).

Regardless of how rare a sighting here it is exactly, it still left me with a feeling of childish glee, almost trembling with excitement. It’s quite pathetic what birds do to us birdwatchers sometimes, it really is. 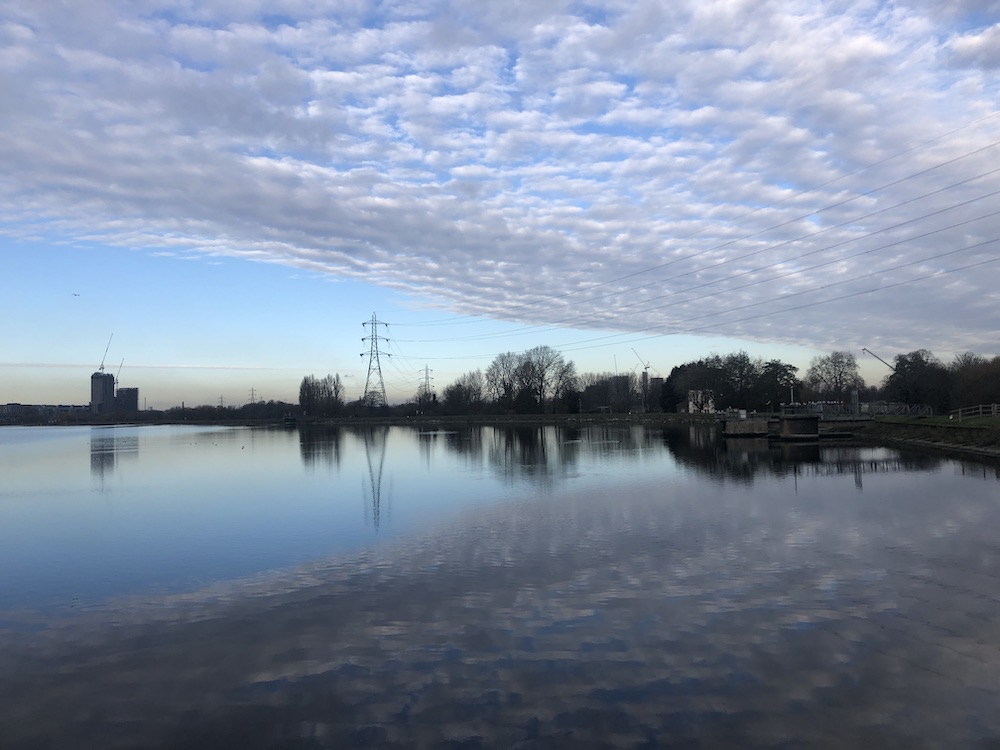