Sixty seconds in a minute, sixty minutes in an hour, and now sixty birds in the blog. Although not quite. That question mark in the title means we’re trapped in the netherworld between birds, a place I’ve alluded to a number of times, that birdwatcher’s hell — the tentatively identified bird.

This is a far worse place to be than the completely unknown bird. I had fun today with two mystery bird calls. The first sounded like some exotic rainforest clanger, a few explosive lazer gun noises in a row, and then silence. I walked away fairly sure it was an odd call of a familiar bird, and Jamie on the whatsapp group made the pretty accurate judgement that it was a chaffinch pulling yet another “typical” call from their repertoire. Someone should give them some sort of award for originality. The David Bowie of the bird world, never afraid to reinvent themsleves with some new sound.

But leaving that unidentified call behind wasn’t much of a wrench — I didn’t have a clue what it was. But I didn’t worry about it and moved, spending a great deal more time standing in the so-called “magic semi-circle” watching willow warblers, chiffchaffs, and my first reed buntings — juveniles — for more than a week enjoying the morning sun almost as much as I was. I heard the most hesitant reed warbler song I think I ever have too, a few seconds between each note. Really a day for absorbing and enjoying the slow height of summer. I think I wrote that down in the notebook.

That was at around 8.30 in the morning, before the summer truly hit though. I didn’t leave the house again until six, when the dry, hot air was enough to parch my throat in seconds. Up around Lockwood again I heard the second mystery bird call of the day; another exotic sounding whistle, this time lower pitched and rounder than the soft chiffchaff whistles that accompanied it. The mystery didn’t last long this tiem though — far from a rarity in a bush, it was a young mallard in the channel before them, pining for its mother. Ever been had…?

So no total mysteries today, although I had a couple of possible flirtations, but the day did end with the mystery’s cheap half-sibling — the cliff-hanger. None of the exquisite riddle about it, the sense that all the pieces are there and just a little more application of the little grey cells, as Poirot would say, will yield the truth. No, I am stuck with the invitation to tune in next week, or, as in a fremium game, to buy an upgrade to unlock the next level.

Which is particularly unfair as I have just purchased an upgrade. Today was my first day birdwatching with a newly purchased camera, after being told repeatedly by multiple people that if you want to get good at identifying gulls and, what’s more, be believed when you’ve seen some of the more unusual ones, then a photographic record is essential. So I do now have photographs of today’s putative Yellow-legged gull, a youngster floating a hundred metres away near the opposite bank, and then a little closer as I passed by on the opposite side, but this time silhouetted by the sun.

But my shaky hand-held camera work, and a lens more pappardelle than paparazzi (yes, I know that doesn’t make any sense!) is still not up to the task, and all I have are a few grainy, slightly movement-blurred confirmations that I saw a gull with a dark smudge on its face, whitish neck and fairly neatly demarcated back and wing feathers, that, were it a bit meaner looking, would be a shoe-in for a yellow-legged gull, but as it stands could just be a particularly pale one among the lesser black-backed gulls floating on Lockwood.

Yes, yes… I know I can’t count it as a yellow-legged. And the more I look at the photos, the more convinced I am that it’s a lesser black-backed. And I regret choosing it to be today’s subject. This morning’s memories of the oh-so-sleek willow warbler skating through the tangled twigs in the morning sun woudl have made for a far more harmonious post. But it’s done now, and there’s no going back.

So thank you, yellow-legged gulls of the world. Thank you very much for staying away and ruining this blog. Thanks for nothing.

Unless, of course, that’s you in the photo, in which case I take it all back. 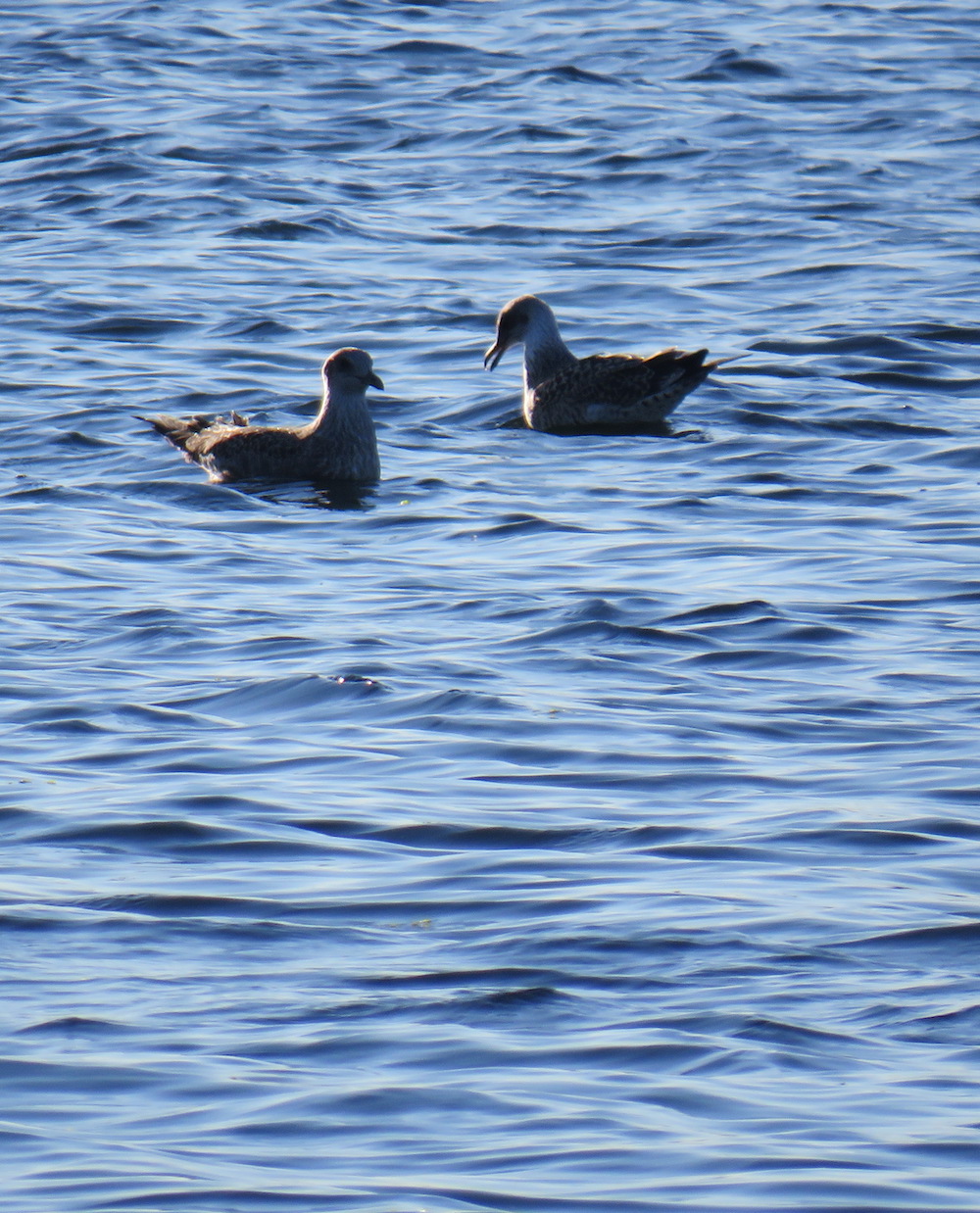