New year’s day — hangover notwithstanding — is a wonderful day to go birdwatching, and most denizens of the wetlands patch were out and about to see in the new birding year.

Is this because of some unusual symbiosis between humans and our feathered friends? Do they time some spectacular winter agglomerations to coincide the Gregorian calendar’s new year? (And if so, do they coordinate with Chinese New Year instead out east?). Or does this day mark the seasonal arrival of some rare migrant?

No to both. Of course not — birds couldn’t give a monkeys about us.

But, if you’ve been paying attention to this blog you’ll know that the beauty of nature and rarity are only two strings in the birdwatching bow. New year’s day is no better than any other day on these counts, but on the other two — the thrill of the chase and obsessive collecting — it has the advantage of resetting the scales, and on this day zero each and every species seen is an addition to the new 2021 year list, which adds a certain warming frison to the frosty waterside walk.

Nevertheless, I was a bit sluggish leaving the flat (I keep forgetting to set the heating on a timer to warm the place to a more tempting alternative to duvet warmth) and didn’t venture out until about midday. A punctured front wheel (the third in as many days due to some stubborn glass shards embedded somewhwere in the tyre) meant I was on foot for a change, and the streets were still quiet despite the late hour. Not so the wetlands themselves, far busier than usual on this last long weekend before the return of the working week.

The first bird of the year was in fact ticked the night before, just after midnight, when thin seep calls of some Redwings passed overhead. The catalyst to finally get me out of bed was a report that the affectionately named “Cyril” the Scaup was back — one of a handful of these wintering ducks, that are more commonly found bobbing about in the North Sea, who choose to spend the colder months on the more sedate waters of London’s reservoirs. While every bird counts on New Year’s day, some birds are more equal than others, and having a special duck on site adds to the entertainment.

Knowing where to find Cyril I took an initial detour around High Maynard, where he was to be found sleep-floating among his usual coterie of Tufted Ducks, standing out with his softly patterned, steel-grey waistcoat among the conventionally tuxedoed tufties, like the groom’s slightly more expensive suit at a wedding.

The detour meant I walked Lockwood in an anti-clockwise direction, which always feels wrong. I ducked down from the top path near the north end to avoid disturbing the roosting gulls (on the previous day I’d caused more than my fair share of disturbance during a two hour attempt to track down what I — for way longer than I should’ve done — thought may have been a thoroughly rare Ring-Billed Gull). While checking the concrete ramp down to the overflow channel for Green Sandpipers (two of which were duly found), I ran into Chris, finder of Cyril, also kick-starting the New Year list.

Rounding the north-east corner there was no sight nor explosive sound of the Yellow-browed Warbler that’s been around on Tottenham Marshes lately (quite a special little bird I’m ashamed to have not blogged about), and aside from a patrolling Peregrine the walk back down towards the public path was largely uneventful.

Until, to my astonishment, the best bird of the day made an appearance, unexpectedly choosing to patronise the more disturbed end of the lake. Floating on the water among some Black-headed Gulls fairly close to the shore was what I felt sure was an immature Caspian Gull in it’s first winter plumage — long, straight bill, cleaner white head and neck than the nearby Herring Gulls, generally long-looking and with a hard to describe, but quite distinctive mottled grey pattern on the back… it ticked so many boxes it had to be.

But large gulls are a fiercely private bunch, guarding their identities with several layers of hard encryption. Because learning the dark arts of teasing out their identities is so tricky they are perhaps the only family of regularly occuring British birds where photos are absolutely expected alongside any claim of seeing even slightly less common ones. I used to gripe at this, but now that I’ve had a camera for six months and have had multiple definite/probable/possible rare gulls downgraded by the experts to “Unusual Herring” status, I do now see the point.

So I reached for my camera almost as soon as I’d marked this gull down as a shoe-in. Remarkably, even though my slightly too quick removal of the backpack spooked all the commoner gulls, scattering them into the air, the “Casp” more or less stood its ground, only paddling slowly away. I only managed to take a couple of photos before my batteries died… which left me with a dilemma.

Cry “wolf” in the whatsapp group about a gull I couldn’t even produce a photograph of, or rush home to produce some evidence…

…or call in the cavalry, in the shape of a discreet tip-off to Chris (possessor of far better photographic equipment than me) to hurry along.

I sat in the cold for ten minutes waiting, alternating between checking the gull’s progress towards the safety of the floating islands in the middle of the lake — praying it got no bright ideas about escaping to somewhere further away — and Chris’ progress along the crest of the several buttresses that make up Lockwood’s West bank. 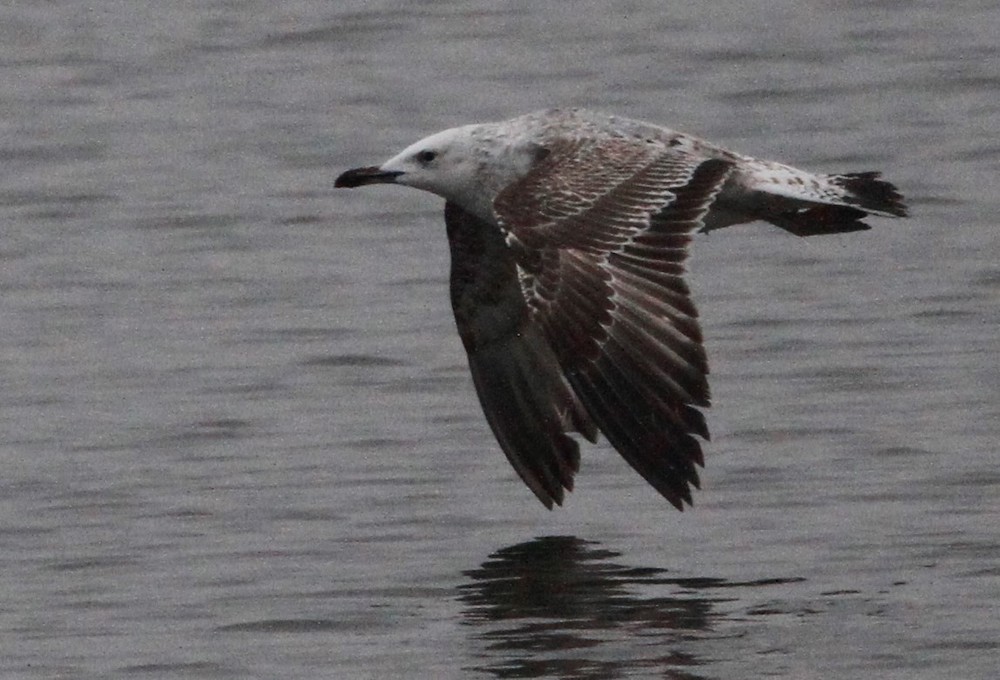 Chris won… just. A few minutes after his arrival and the gull flew north, too late to spread the word, but such is life when it comes to avoiding false gull alarms.

After seeing Chris’ photos I begin to see why the gull experts of the world rate this superficially mundane bird as a corker. With only a few variations on the basic Herring Gull theme, this eastern equivalent (breeding from Eastern Europe to the Caspian Sea) has something a little more epic and ocean-going about its build, something of the wildness of a Husky dog compared to its more pampered brethren.

Or could it be that I’m just chuffed to bits to have found something genuinely scarce for the reservoirs, and to have broken my recent streak of misidentifying gulls.

I’ll just have to find another one to check, won’t I. 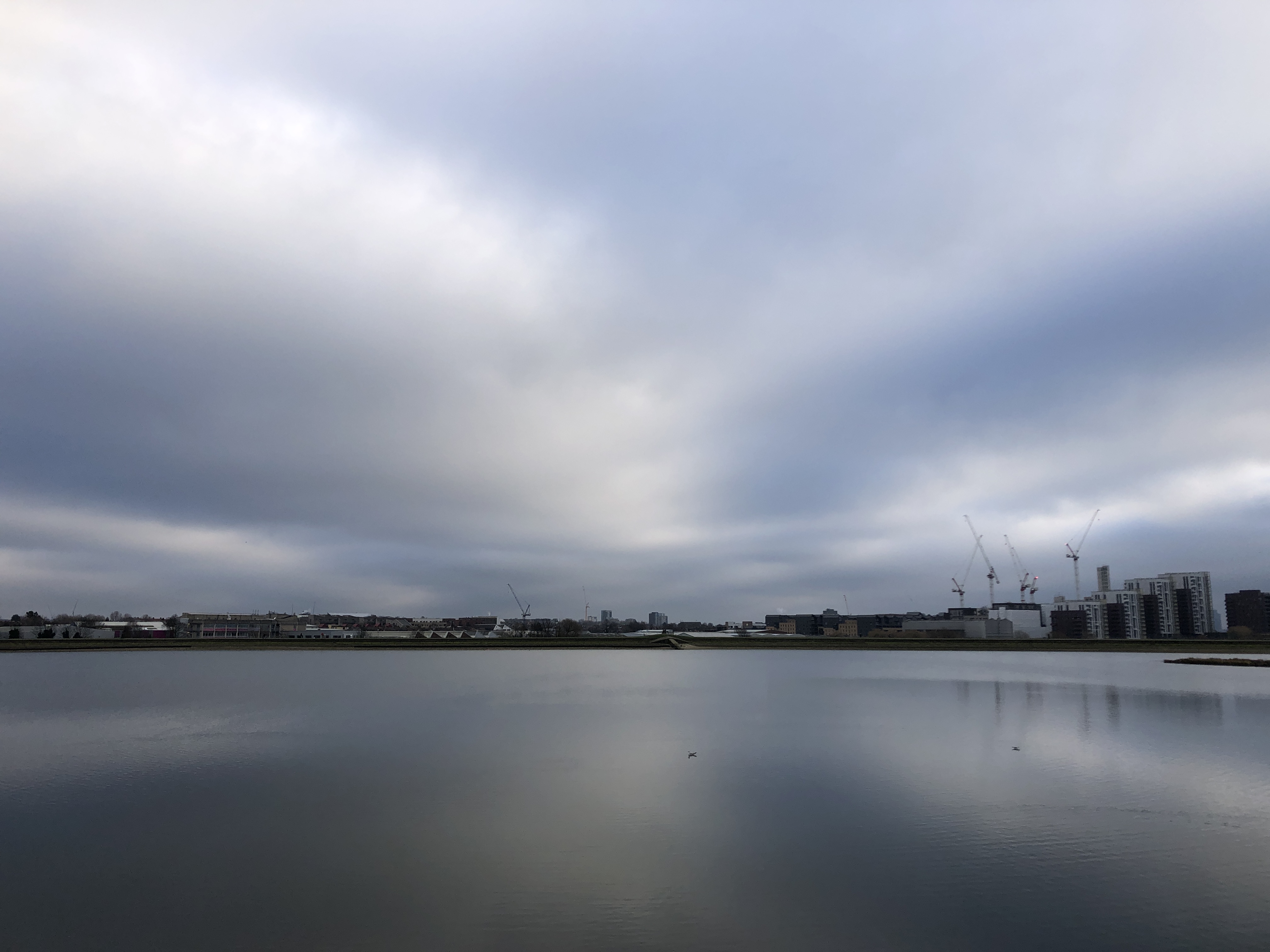 (Thanks to Chris for the nice in flight photo, and for being a fast walker)