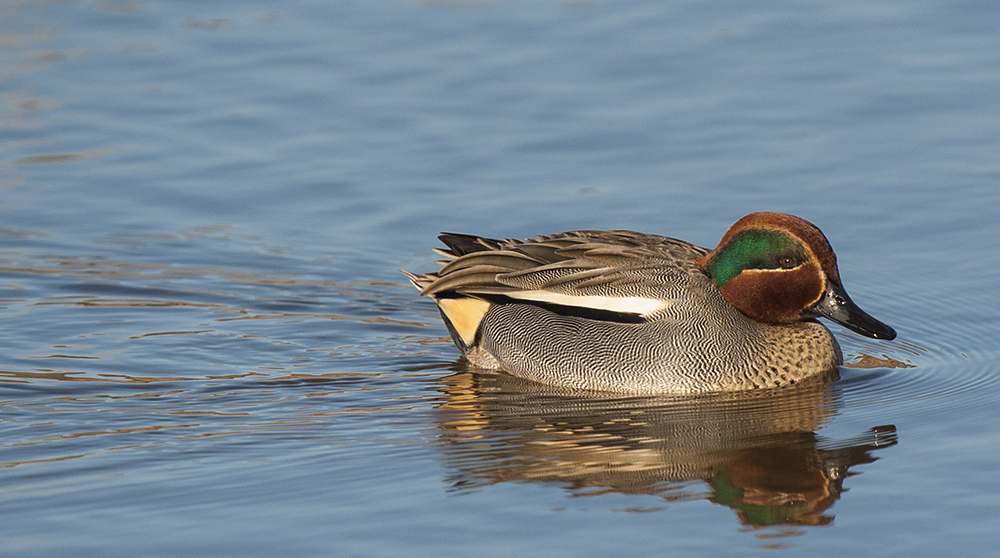 Today’s bird is a fine metaphor for what it’s like to write this blog as the onward march of summer slowly drains the lakes and bushes of their avian colour. While there is the occasional injection of interest — courtesy of some passing migrant — the balance is in the red compared to a couple of months ago. If the reserve are cheeks, then they started off rosy and blushing, and are now hollow and drained.

Much like the cheeks of the eclipse male Teal I found this morning, nestled beneath the overhanging branches reaching out from the northernmost High Maynard island.

Ducks are a pretty bunch on the whole, boasting plumages that are not far short of the birds of paradise in their variety and vibrance. On twitter a while ago somebody conducted a poll of which duck is the prettiest boy — the males are almost always the only colourful ones, with females tending to be camouflaged with brown streaks. I can’t begin to remember what the shortlist was other than it definitely included the ermine-clad smew and my favourite, the pintail, did not make the cut.

Teal also did not feature, despite being one of the cutest birds this country has to offer (perhaps, as in modelling, the polls penalised conventional beauty). Their rich chestnut heads are decorated with gold braided, smoking jacket green sashes reaching back from the eyes to meet at the nape, and out front sits a dinky, dark, toy beak that joins the forehead in a rollercoaster-smooth curve. This sits on top of some classic duck bodywork — a subtle, shimmering blend of greys, blacks, whites and buffs, finished off with a straw yellow triangle beneath the tail. The females, as ducks go, are a cut above too, with neater brown scalloping than most, and a neat green patch midway down the wing.

All to the good, but their standout feature is their size. Today’s was sat on a shingle bank next to a mallard and was absolutely dwarfed — about half the height, an eighth the heft, looking more duckling than a duck. To add to the belittling experience the teal was in full eclipse plumage; the drabber colouring they acquire at the end of the breeding season while they moult. This one had chameleoned into a thoroughly forgettable all over brown — a remarkable metamorphosis — and the only things that picked it out as a male were its pale belly still showing a hint of its arrowhead shaped speckling, and the still dark head having what looked like a wine stain on the carpet in place of the green sash.

A far cry from the four I saw — unrecorded on this blog (there was an osprey to write about) — on the first of June, still on their way north to breed, and looking more or less as pristine as when their courting finery first arrived the previous autumn. Returning so early, I wonder if today’s birds (I saw a second one later on Lockwood) had any success breeding?

But now is not really their season. While not rare locally they are a determinedly winter bird, gathering in their dozens around the High Maynard islands, or bobbing about on the River Lea arund Hackney Marshes, where the river is remarkably just about still tidal. Best of all though are their courtship displays in late winter, with males somehow concertinaing their already short bodies into an even shorter space, backcombing their head feathers and fanning their undertail yellow triangle into a bold billboard. They ring-a-ding-ding their dinner bell calls and every few seconds throw a violent little spasm, arching their back, pulling in their neck and flicking out their wings. If you ever saw David Bowie’s video for the Drum ‘n’ Bass inflected Little wonder… a bit like that.

If I’m still going then maybe we’ll revisit the fine and dainty teal for a repeat viewing.